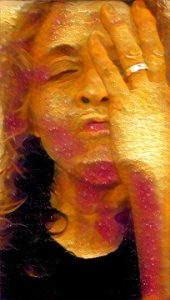 So today I made a list of all the failures I’ve had over the past ten or so years. Yeah, I know. It’s not something a person would normally want to do. It’s a tad masochistic. (“Ya think?” yells the peanut gallery that sits in the back row of my brain.) But sometimes a chick can’t help it. Sometimes I just have to stare it all down and see what I can decipher. Maybe a comforting metaphor is lingering just beneath the surface. Maybe not. Anyway, I was inspired to do so by a string of events that have taken place over the past couple of months. 2017 has been a bit of an asshole so far.

I also made a list of successes. There have been a few. But when I put the lists side by side, the failure list was much longer, emphasis on much. I’ve written a bit about rejection on this blog, but not so much about failure. I’d say the two are like sisters. They’re different creatures but share a familial resemblance. I suppose it’s a bit vulnerable to delve into this subject. It’s akin to trying on swimsuits under fluorescent lighting in front of a group of people, or worse, on Facebook live. Eesh. So why even go there? I guess it’s the hope that by dragging it out for all to see, it loses its potency.

I’ve been knocked on my ass more times than I can remember. I’ve been invisible when I desperately wanted to shine. I’ve lost big chunks of my heart that I’ll never get back again. I thought I would eventually deepen into some kind of poised sagacity and that graceful perseverance would lead to great success. However, I’m more like a scrappy street fighter, spitting out dirt, surviving on instinct and grit. This isn’t necessarily a bad thing. It just wasn’t what I unexpected.

There are always those individuals who failed multiple times–hundreds even–before realizing enormous success. J. K. Rowling comes to mind. Well-meaning loved ones like to bring this up. Of course, there are also millions of people who fail repeatedly and never reach success, whatever their definition of it may be. James Altucher, one of my favorite bloggers, says that the past is not necessarily an accurate indicator of the future. I take some comfort in James’s perspective. It feels less pat to me.

Earshot Jazz had its annual awards show last night. A lot of people I know were honored. Facebook was full of congratulations and celebration. I’m happy for my friends and can only imagine how exhilarating it must be for them. The closest thing I can compare it to is the rush of joy I felt when the Seahawks won the Super Bowl. It was like floating around in heaven for days. Of course, that was their accomplishment, not mine. But the thrill was very real. We all want to tap that. Unfortunately, not everybody gets to.

We can’t talk about failure without talking about risk. Risk is requisite and inherent when going after anything worthwhile. And God knows, many of my ambitions have been difficult. I’ve crashed and burned frequently. I’ve also been willing to go all in again and again and again. Some might call that stupidity. But I have to believe there’s honor in the effort. Courage means something, even if it doesn’t result in a win.

And we can’t talk about failure without mentioning resilience. As I said before, I’ve been knocked on my ass more times than I can remember. But I always get up. Every. Single. Time. I could romanticize that as some kind of stubborn resolve, but it’s usually just the simple truth of having no other choice. Tending the bloody nose is just part of it. The real test comes in whatever we do after that.

My brother Allen is a veteran marathon runner. When I ran my first 5K race, he told me that I wouldn’t be at the front of the pack but that I wouldn’t be at the back either. He also told me a story of a particular marathon and about getting extremely fatigued around mile 21 or so. His pace slowed a tad. About that time, a runner in a banana suit flew past him.  Allen says he looked at the guy in the banana suit and thought to himself, “Oh hell no!” He shored up his reserves, blasted off and finished the race at a respectable pace, clocking in at a time he was happy with.

“Only to the extent that we expose ourselves over and over to annihilation can that which is indestructible be found in us.”