Get Out There & Kick Some Ass

The inspiration for this blog post came to me while I was driving home from my yoga class last night. I have no idea where it came from or why.  It doesn’t matter. The message is this:

GET OUT THERE AND KICK SOME ASS TODAY.

Actually, get out there and kick some ass every day.

This will mean different things for different people. For some of you, this will mean maintaining a shit-eating grin while your incompetent boss blathers on incoherently. For others, it means biting the bullet and telling that pain in the ass relative–the one who is never going to stop being a pain in the ass–to piss off already. For some, kicking ass will mean pounding through another day of job-hunting or finally making that dreaded appointment. For still others, just getting out of bed and getting dressed in the morning is a courageous act of kick ass.

Kicking ass is about knocking on doors, taking another run at it, flexing muscles, rocking warrior poses, picking up the damn phone,  pushing back and creating at all costs. It’s about tenacity and fire.

It’s about standing up when you think you’re surely going to fall down and hanging on like a pit bull, even if you’re dangling on the edge of complete exhaustion. Kicking ass is slogging through the pain with nothing more than grit as your anesthesia. Think medieval dentistry.

It doesn’t matter if it’s hard or you’re scared or you’re worried. It doesn’t matter what your circumstances are. In fact, sometimes it’s best not to overthink your life. Anyway, it isn’t finished until you’re dead. Maybe you think you can’t; that your story is too sad; that you’ve been on your back too long and that the universe doesn’t love you. All of these may be true. But dig into your reserves, find bigger boots and commence with the ass kicking anyway. 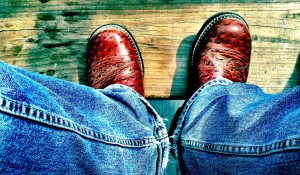 Don’t get me wrong. I’m all about flow and ease and beauty. But kicking ass is equally noble among these. Kicking ass is grace in a superhero cape. It’s not reckless abandon. It is firm and decisive.

Need inspiration? Look around you. Other people are kicking ass every single day. Marshawn Lynch kicks ass whenever he touches a football. Rachel Maddow kicks ass on a nightly basis. The guy with cerebral palsy who works at the mini-mart is kicking ass. The Dalai Lama, in his calm and elegant way, is kicking ass. Even your grandma is probably kicking ass. (Or did kick ass.)  So why shouldn’t you?

It doesn’t matter if your nose gets a little bloody or your clothes get dirty. Sometimes, it doesn’t necessarily even matter if people like you. What matters is getting it done. Whatever it is that needs to get started or finished or explored or fixed or healed, step up and get to it. Kick some ass right now

In saying this to you, I am not preaching some kind of Norman Vincent Peale, feel good yummy yummy. The truth of the matter is that I’m a weathered realist with a bit of an Eeyore complex. We don’t necessarily kick ass to feel better. We kick ass because we have to.

When you kick ass, you are unapologetically investing in your own survival.

“Not knowing how it will end and whether you’ll be able to pull it off is a mandatory part of the process.“

4 responses to “Get Out There & Kick Some Ass”