My Kind of Patriotism

I don’t have to tell you that it’s ugly out there. We’re engaged in a dark battle over what this country is and what it will be. While this conflict is rooted deeply in our history, it was harshly exacerbated during the 2016 presidential election and continues to rage. What started in social media threads and on cable news has now spilled into the streets as violence and bloodshed. Two factions. Two very different views of what it means to be American. Tangled up in the morass of all of it is the ideology of patriotism and curious opinions about who gets to hold up that banner. This is particularly evidenced in the case of Colin Kaepernick and the national anthem.

At the start of the 2016 season, Colin Kaepernick, then quarterback of the San Francisco 49ers, declined to stand for the national anthem, opting instead to quietly kneel. His refusal to stand was a protest against police brutality targeting people of color and racial inequity in the U.S. He was very clear about his reasons. Shortly after, other players followed suit, including his teammate Eric Reid and Seattle Seahawk Jeremy Lane. Athletes from other sports joined the protest, also declining to stand. In March of this year, Kaepernick opted out of his contract with the 49ers and remains unsigned as of this writing. (Many feel he’s been blacklisted by the NFL. I’ll get to that in a minute.) This past week, as preseason games kicked off, Michael Bennett, defensive end for the Seahawks, and former Seahawks running back Marshawn Lynch, now with the Oakland Raiders, have continued Kaepernick’s protest. Each remained seated while the national anthem was played. And just as with Kaepernick, the backlash has been vociferous.

Social media is lit up with outrage. Apparently some people…a lot of people…have a problem with black guys exercising their First Amendment rights. Comment threads are full of vitriol, anger and racism, both overt and veiled. Comments range from “time to retire bitch” and “players are here to play football, NOT to profess their ignorant political views” to “if you hate America so much, then leave” and much worse. They’ve been called traitors. Indignant fans are threatening to boycott their teams and the game. Kaepernick, Bennett and Lynch have been accused of hating their country, of disrespecting the military and of being  anti-American. To all this, I say HOLD UP A MINUTE. 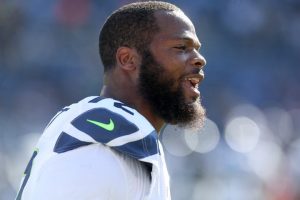 First of all, nobody is the sole arbitrator as to what defines patriotism. That’s a right granted to each and every one of us. If you’re offended by the actions of these men, then you’re choosing to be offended. I’d call it self-inflicted indignation with a whopping side of projection.  And if you believe these men don’t love their country, you’re making an egregious and, quite frankly, lazy assumption. I’ve also seen comments suggesting that those who haven’t served in the military don’t have the right to speak out. I find this logic to be dismissive and misguided. I have much respect and gratitude for members of the armed forces. But just because someone hasn’t served, it doesn’t diminish their right to an opinion. Finally, people of color have a very different experience of this country than white people do. When they share their truth, try listening. Don’t call them un-American. And one other thing-stop telling people to leave. Maybe you should leave.

Patriotism, to me, is a deep commitment to equity, dignity, safety and opportunity for all people regardless of race, ethnicity, religion, sexual orientation, gender identification and physical ability or disability as the case may be. It’s a shared value system, rooted in compassion. It’s the fundamental belief that our brothers and sisters are inherently good and equally deserving of “life, liberty and the pursuit of happiness.”

My vision of patriotism also includes a thoughtful, engaged citizenry, working together to make things better. Kaepernick, Bennett and others are great examples. They’re using their platform to make a statement about something that is profoundly important to them. I believe this is more meaningful than rote participation in a two-minute ritual. I’ve been to plenty of NFL games. During the national anthem, a whole lot of people are looking at their phones, talking to the person next to them, poking a finger in their beer or whatever. They may be physically standing, but they’re not exactly paying attention. To be clear, I don’t disparage those who find meaning in the ritual. I do have a problem, however, if this is the sole litmus test for another person’s patriotism. Who gets to decide that anyway? 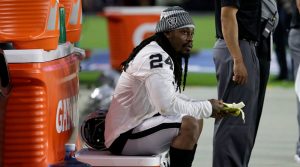 I think with Kaepernick and now Bennett and Lynch, this is really a case of scorning the messenger. They’re shining a stark light on something that makes people, especially white folks, very uncomfortable. If you can vilify the messenger, then it’s easy to dismiss the message. And as long as you dismiss the message, you can continue to do nothing. It’s much easier to piss and troll on the Internet than to actually take action. There are also a lot of people who say they agree with the message, but not with how they’re expressing it. My response to that is: Then what are you doing to help them?  If you really do believe in racial equity in this country, then do something. Maybe then, Kaepernick, Bennett, Lynch and other players won’t have to continue with a method of protest that you find so objectionable. To quote Gandhi, “Be the change.”

I do believe that Colin Kaepernick’s political actions are the reason that he’s not yet been picked up by any teams. I don’t know if this is an intentional collusion across the league or the case of multiple team owners deciding independently not to hire him. Neither would surprise me. The NFL is an organization with questionable ethics and a quagmire of problems, starting with Roger Goodell. But this is a topic for a whole different post. Suffice to say, it takes a significant measure of compartmentalization to be a fan. But the subject at hand really goes beyond football. The American experience is different for each of us. Nobody has exclusive rights for defining patriotism. But I can tell you this much: Patriotism is much bigger than a flag and an anthem. 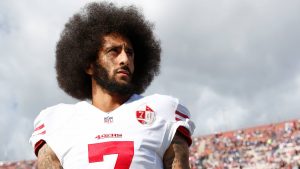 “I was never more hated than when I tried to be honest.”- Ralph Ellison, Invisible Man

If you support Colin, Michael and Marshawn, check out their charitable organizations:

Raising awareness on higher education, self-empowerment and how to interact with law enforcement

One response to “My Kind of Patriotism”

Leave a Reply to Racism & the NFL: What’s a Fan to Do? | Katy Bourne Cancel reply