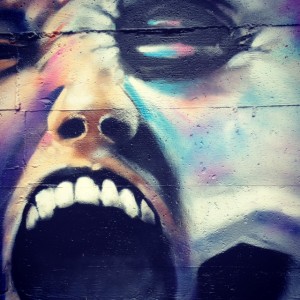 OK, so the other night I was sitting at my dining room table, working on something. I was using a magic marker. I’m talking a big-ass, old-school Marks-A-Lot with the gnarly fumes. I was working away and started to get a little lightheaded from the vapors. Things went a little dippy, a little flippy and a whole lot otherworldly. The edges blurred for a second. There was a pop of light, and then God was sitting right there in front of me, in my own dining room. It was like someone let the cat in or something, but it was God. Weird, right? After all that LSD back in the day, the ultimate trip happens when I’m a middle-aged goober labeling a box of old CDs on a Wednesday night. Mysterious ways indeed. Word.

Anyway, there were a couple of things right off the bat. God is super jolly and way chill. Also, just like the horse in the Wizard of Oz that changes colors every few minutes, God does it with gender; male, female, transgender, genderqueer, androgynous, whatever. And it was the same with skin color too. In the span of mere minutes, she/he/they/ze was black, brown, white, yellow and red. It was like a kaleidoscope of humanity shapeshifting before my very eyes.

At first, we just looked at each other and cracked up, big-time. I was laughing so hard it was physically painful. I thought I was going to pee myself. For real. And then, God just went off, riffing about everything. She had a shitload to say and she got down, pausing every few minutes to beatbox. Killer that. And then he’d go on some more. I don’t know why I was chosen for this arbitrary moment with the Almighty. Maybe it was random. But I do know that I bore witness, and it would be selfish not to share. So in case you’re curious, here’s shit God says:

“I’m thinking of changing up the commandments. Frankly, I don’t really care if you take my name in vain. I’m God. I can handle it. In fact, if I’d just hit my finger with a hammer, I’d probably take my name in vain too. HAR! CHORTLE! We can toss that one out. But seriously, I am thinking about adding something about Facebook. You know, ‘Thou Shalt Not Fight your Friends’ Acquaintances on Facebook’ or something like that.  Shit’s getting crazy up in there.”

“To you ding dong kids at Duke who don’t want to read ‘Fun Home,’ stop being such babies! If you don’t like the syllabus, go to Oral Roberts U.! Or better yet, don’t go to college at all. I gave you that lump of gray matter for a reason. Don’t want to use it? Fine. Sit in a tree and pick your nose. (And note to self: intellectual discourse is lost on some of the children. Design flaw?)”

“I love the gays and the lesbians and the bisexuals. I love the queers and the freaks and the drag queens and the geeks. I love the leather daddies and the dykes on bikes. I love the butch and the fem and every living creature in-between.  That part about creating mankind in my image? I damn well meant it.”

“Trump. Dude. You’re cracking me up.”

“Lay down your arms, people. You’re pissing all over the gift.”

“To the woman in Eastern Washington who said it was my will that her house didn’t burn down (when the poor sucker’s down the road did?):  Stop for a minute. Really think about what you’re saying. Sigh. That’s not how I roll, sister.”

“Jesus is an awesome son for sure, and I’m glad you all have started so many fan clubs for him. But some of you are getting a little…okay, a lot…out of control. Drop the hate, yo.  And kids, lose the side-hug thing. You’re embarrassing Jesus.”

“You either trust me or you don’t. Mind your own beeswax and leave your fellow human beings alone. I’ve got this.”

“Hell, for the record, is really just a lack of imagination.

“White folks! Shut up and listen. You’ve had the floor long enough.”

“I created science and scientists. Stop arguing with them.”

“They should have given the ball to Lynch. Nobody ever listens to me.”

“All I’m asking you to do – the one thing– is to love each other. Is it really that hard?”

I have no clue how long this went on. Time wasn’t even a thing anymore. But I can tell you this much: God is a lot of fun. Sadly, when they were done, they were done. She stopped on a nanosecond, as abruptly as she’d started, and just looked at me. I was all sweaty by that point, you know, from seeing God and all, and just stared at her like some kind of vapid bobblehead. I had nothing.  But she was unfazed. He just smiled at me and kind of knocked me over with love. Then he gave me a righteous fist bump and he was out. Poof.