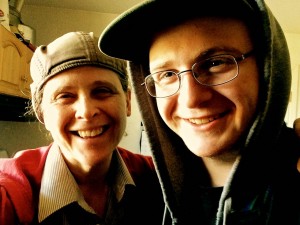 On Saturday morning, my 21-year old son Emmett took off on an extended road trip to explore the United States and, possibly, points south in Mexico and Central America. He loaded the last of his camping gear into his car and we said our goodbyes. Although I tried very hard not to, I cried. Aside from a few stops to visit friends in a couple of states, Emmett has no firm itinerary. His plan is to be nomadic. I won’t know where he is. I don’t know when or even if he’ll be back. I am hopeful that he will communicate at points along the way, but there is no guarantee. I don’t know when I will see Emmett again.

Emmett is doing exactly what he’s supposed to be doing and on his own terms. I know that this trek is a good thing and that he will have an incredible experience. I also completely trust in his ability to take care of himself in the world. But none of these factors diminish the enormous ache in my heart. As brilliant as his launch is, there is still the sad tug of loss to be reckoned with.

He had actually planned to leave in the middle of January, but was involved in an accident (not his fault) that totaled his car. He had to postpone the trip to regroup and secure another vehicle. Because he had already given notice on his apartment, he ended up staying with me for several weeks. This was a very special turn of events for me. We had not lived together since his father and I divorced when Emmett was 13 years old. At the time, he was adamant about living with his father and I respected his wishes. So when he asked to stay with me after the wreck delayed his plans, I was thrilled to oblige. On a rainy Saturday night, I helped him clear a few things out of his old apartment and over to mine. It was pouring out. I believe the move took us two trips. After we were finished, he bought me dinner at a Mexican restaurant. I knew in that moment that this unexpected windfall of time together was a gift. And it couldn’t have been sweeter.

Emmett has always been strongly independent and unwaveringly self-assured. When he was a little kid, he rarely had separation anxiety. He’s also fearless, especially when it comes to physical risks. (This has long contributed to mom’s troubled mind and adds an extra touch of anxiety to the current situation.) Emmett has never been one to follow the traditional path. After high school, when most of his friends took off for college, Emmett opted to go straight to work, ultimately supporting himself at a relatively young age. For a brief period, he considered starting his own business, but wanderlust began to beckon. He continued working and saved enough cash to enable the adventure he has just set out on. I am proud of Emmett and I respect his choices. He is creating an amazing life for himself. He’ll be OK. But damn I’m going to miss him. I miss him already.

The first lesson I learned as a mother was that there would be great sadness sometimes. I also experienced a harsh reminder of the nature of impermanence. These lessons are prevalent again now. One moment you are coming home with a new baby in your arms, and the next, you’re hugging him goodbye on the curb. It happens so very fast. In many respects, motherhood is temporary.

Last June, Emmett’s 17-year old brother decided to live with his dad full-time. For the most part, I have been relieved of my mom duties. And so now with Emmett’s departure, I have a sense of a cycle completing itself. This feeling is tender, surreal and difficult. It is also a little lonesome. My challenge now is to figure out what’s next. This is a bewildering mission. No doubt, music and writing will be involved. But I may consider other possibilities.  An eventual move to another city is not out of the question. Freedom and peace will guide my choices.  There is much soul-searching to do.

But first, there is grief to attend to and the excruciating task of letting go.

7 responses to “The Hardest Goodbye”