Everything came to a screeching halt.

On Wednesday afternoon, I received the news that my son Emmett’s best friend had been in a horrific accident. As he was riding his bicycle to work, he collided with a van. He suffered massive brain injuries and underwent emergency surgery at Harborview, where he now floats in a coma in the intensive care unit.

On this particular day, my wonderful city was already in the grips of sorrow and shock over the senseless shootings that took the lives of five people. I was walking out the door to pick up my son Enzo, who had been in lockdown at his middle school for the majority of the day, when I received word about the accident. The drive to the school felt like it was in slow motion. A surreal pall was hanging over the city and my own inner turmoil over the news I’d just received was disorienting. I could not formulate thoughts. The world felt dangerously inhospitable and all I had in that moment was a wild maternal instinct to find my boys and pull them safely back to me.

I have been to the hospital a few times now. I don’t feel at liberty at present to reveal medical details or to identify Emmett’s friend by name. I can only say that his prognosis is bleak. The scene at the hospital is a sad vigil marked with waiting, questions, medical jargon and tears. Family is gathered around. Emmett and his friend run in a tight posse and there is a steady presence of teenage boys there. Some of them I’ve known since they were little kids, but many I’m meeting for the first time. Emmett’s rebel yell has been loud and explicit the past few years. There are big pieces of his life that I am not privy to. I am pained to say that I don’t really know his people. I wondered how it would be to meet them under these circumstances. But there have been no barriers here. Hugs have been freely given. Love has been expressed without trepidation or hesitation. Emmett’s friends have shown me nothing but unwavering kindness. His people are beautiful. 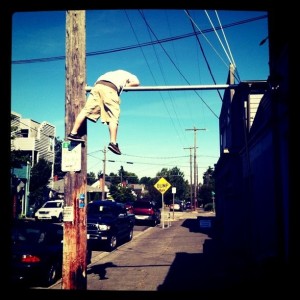 The accident happened as a result of Emmett’s friend trying to buzz through an intersection on a yellow light. The specifics remain a little fuzzy but there seems to be no dispute that Emmett’s friend was “at fault.” It is heartbreaking that one quick unfortunate miscalculation–one that any 19- year-old boy might make–has resulted in such devastating consequences for such an effervescent young spirit. Why is it that the fates would turn so cruelly? And there is no question in my mind that it could have just as easily been my own son. Emmett is the most fearless person that I know. He will climb anything, ride anything and attempt anything. He has no regard for heights and does not concern himself with caution. He has always been fueled by adrenalin and a robust sense of invincibility, at least until now. My biggest fear has long been receiving a phone call like the one his friend’s parents received.

I know that this boy’s family is undergoing suffering of the most catastrophic measure. I am bleeding for them. And my mother’s heart aches to watch Emmett experience such raw and non-negotiable anguish. If I could take his pain, God knows I would. If I could intercede with the heavens,  I would offer my very soul to reverse this tragedy. But I am powerless. All I have to give is my presence and my love.

I have no sense of space and time right now.  I don’t have my bearings. I can’t seem to think clearly or sleep. I can’t stop crying. I am plunged into a myriad of intense emotions and deep soul searching. I am out of sorts and adrift. At times, it feels like I am drowning.

Everything has come to a screeching halt.

When everything comes to a screeching halt, time freezes and we are reminded of the fragility and ambiguity of life. We stand at the intersection of despair and clarity and we transcend. Distractions, posturing, ego and defenses all evaporate. We are naked. Stripped of the veil,  we urgently return to the only thing that matters– LOVE.

The fresh and beautiful moon is traveling in the utmost empty sky. When the mind- rivers of living beings are free, that image of the beautiful moon will reflect in each of us.

There is nothing to chase after.