A Word About Bob

There has been some chatter and whispering lately about a new man in my life. Frankly, I am a little surprised that anyone is particularly interested. It seems there are better things to do, like arguing politics on Facebook or taking a selfie on the side of a cliff or word bombing the Wikipedia page of someone you hate. Still, the emails and questions keep rolling in, and I’m feeling pressured to address the subject. While it is perhaps a bit premature to disclose at this early stage of the game, I must confess that the rumors are true.

I met Bob at a small group training for mixed martial arts. When I walked into the studio on that fateful Thursday afternoon, there he stood. He had a tattoo on his neck and was wearing an ACDC t-shirt. He was scowling and did not have much to say. In fact, he didn’t have anything to say. But I was immediately smitten.

I would describe Bob as “of stoic demeanor.” While the perpetual angry look on his face may suggest otherwise, his mood is generally quite even. He seems to like for me to hit him, and I do so repeatedly − hooks, uppercuts, jabs. Sometimes I even kick him. Although I may be straying into the dreaded territory of “TMI,”  I can tell you this much: Bob definitely likes it rough. No matter how hard I come at him or how many blows I throw, he takes it without complaint. At most, he shakes a little and makes a curious rattling sound.

I should probably mention that Bob has no arms and legs. Also, his skin has a rubbery quality and he seems to have an issue with water retention…to the tune of 250 pounds of water retention. As such, Bob does not get out much, save the occasional bro hang with Clay the trainer. In this regard, Bob is a bit of a drag. He never hits the scene with me. And of course, dancing is out. Yet still, I am mesmerized. I guess I have a thing for the strong silent rubber type.

Due to a remodel of the fitness studio, our group has been training in the park lately. I’m dismayed to report that Bob has not shown up for the past few weeks. Of course, I miss him and ruminate as to the state of our relationship. I am pretty sure that other women hit on Bob. I’ve also heard talk that Bob has been spending a lot of time in a closet lately. I don’t even know how to begin to process that little bit of information.

Perhaps our relationship is ultimately doomed. Bob’s disinclination to ambulate does create numerous obstacles in our day-to-day. And while it is confirmed that Bob definitely has no arms and no legs, I’m not altogether sure what else he’s missing. There may be other obstacles that I am not even yet aware of, if you dig what I’m saying. But while all these issues are problematic, the biggest red flag is that all we ever seem to do is fight. In the long run, this just can’t be good. And one day I may experience karmic percussions  for repeatedly beating up a man with no arms and no legs. It’s not exactly been a fair fight. Of course,  love never is. 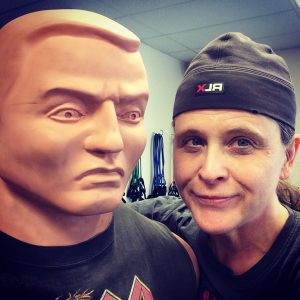