Aftermath of the Aftermath 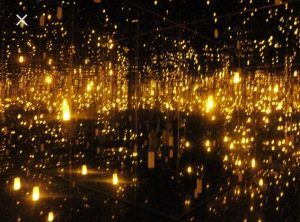 Aftermath of Obliteration of Eternity

I was in Houston visiting family when I heard the news about the massacre in Orlando. Like everyone else, I was stunned, horrified and deeply saddened. Now just over a week since the shootings, I continue to cycle through an array of emotions. Mostly, I feel grief for all the lives that were lost and heartache for the families of the victims. I’ve also been wrestling with a bleak despair over the state of our humanity and the climate of rage that seems to be festering across the U.S.

Art is fundamental to the culture of Houston, and it lives everywhere: in public spaces, in museums and galleries, on the side of old buildings, in scrap metal yards. No matter which direction you are facing on any given street in the city, you are bound to see some kind of amazing piece or installation.

While I was there, I had the good fortune of seeing Yayoi Kusama’s “At the End of the Universe,” which had just opened at the Museum of Fine Art, Houston. This exhibit featured two “infinity rooms,” small experiential spaces that juxtapose light, mirrors and color to create a sense of wonder and ethereal perpetuity. The rooms were entitled “Love is Calling” and “Aftermath of Obliteration of Eternity.” Each filled me with a peace like I’ve never felt before. It was as if I’d witnessed a glimpse of heaven. It was surreal to feel an almost haunting calm, while at the same time carrying the intense pain from events of earlier that day. It reminded me a lot of the space I moved through after my son died, a drowning anguish infused with transcendent grace. 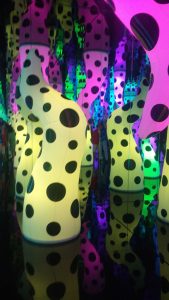 That same evening, we went to see James Turrell’s “Twilight Epiphany,” an outdoor installation on the campus of Rice University. Viewers sit beneath a concrete structure that has a roof with a square opening. Pre-programmed lighting interplays with the natural light of sunset, making a stunning wash of color across the ceiling of the structure. As the sun slowly sinks deeper, the colors change and intensify. The crowd that came to experience the piece was initially loud and chatty, but as the light show went on, a temple-like quiet ensued. The vibe of the crowd was silent and contemplative. Once again, I experienced an unexpected peace and the feeling that everything would be okay.

With both “At the End of the Universe” and “Twilight Epiphany,” I believe that art literally altered my brain chemistry. Maybe I was flooded with dopamine. Maybe all the colors and lights triggered something magical in my subconscious. Maybe I experienced a death of sorts, or a rebirth. All I know is that I felt blissfully expansive and completely at peace.

Since the weekend in Houston, I’ve been thinking a lot about the power of visual art. If it can alter mood and awareness so completely, then its potential as a force of good seems unlimited. High-risk adolescents come to mind. What if instead of incarceration, juvenile offenders could enter some kind of visual art immersion program, where their “sentence” would be an intentional and extended exposure to visual art, especially experiential art where the main point of reference is the senses? Instead of locking up their bodies, what if we blew their minds with color, light, sound and water? Even better, what if they were allowed to build their own versions of “infinity rooms” as part of their rehabilitation? It sure as hell seems worth a try. I’d much rather have my tax dollars go towards something innovative and humane, as opposed to another juvenile detention center. And this is just one idea. What if works the likes of Kusama’s or Turrell’s were integrated more into everyday life and were routinely accessible to everyone? What problems could we solve? How could it transform us? Is it possible that we’ve yet to tap what could be our most effective resource? Perhaps these are crazy questions. But given the rampant madness all around us, they seem quite reasonable to me.

I don’t know that there’s any one solution for dialing back the climate of rage. The snag is that we the people have conflicting views as to what kind of world we want to live in. As such, we seem unable to reach agreement as to how to address our collective problems like gun violence, poverty and racism, to name a few. But I do believe that art can help us regain our equilibrium in troubled times. I take some comfort in knowing that for every deranged and heinous act inflicted on the world, there are also incredible acts of beauty and compassion playing out concurrently. In the grand scheme, that has to mean something. We may not be able to stop the insanity right now, but art gives our weary souls a path out of the quagmire. We have the means to transcend. And just maybe, from this glorious spacious view, we will find the answer somehow. 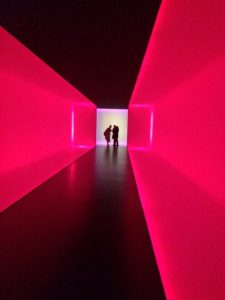 “In the human world, what arouses our body and feeling of vitality is Eternity. I have been living in this Eternity, where enormous love for humanity passes through and the vast brilliance of life is infinitely reflected.”  – Yayoi Kusama

*Photos of “Aftermath of Obliteration of Eternity” & “Love is Calling” by Martha Bourne. Photos of “The Light Inside” and “Twilight Epiphany” were taken by yours truly.

2 responses to “Aftermath of the Aftermath”