An Evening of Cole Porter-A Benefit For the Trevor Project

On Saturday, October 1, my band and I will be performing “An Evening of Cole Porter” to benefit an organization that is near and dear to my heart- The Trevor Project. The performance will take place at 7pm at Egan’s Ballard Jam House. Please mark your calendars.

The Trevor Project is a national organization that provides crisis intervention, suicide prevention and advocacy for lesbian, gay, bisexual, transgender and questioning youth. This noble institution offers a wide range of services: a 24-hour crisis hotline, on online question and answer forum for LGBTQ youth, political advocacy and anti-bullying initiatives and educational programs on topics of gender identity, sexual orientation and suicide prevention. The Trevor Project was started in 1998 in conjunction with the airing of “Trevor,” and HBO film about a 13-year-old boy who is ostracized  after word gets out at his school that he is gay.  The Trevor Project is not only a lifeline for countless young people but it is also a vital resource for parents, educators, policymakers and anyone else who is concerned about the rights, safety and dignity of LGBTQ youth.

I believe that no child deserves to be bullied for any reason and that all young people have the right to move through their days without the threat of harassment, humiliation, fear or physical harm. I am mortified by statistics such as these:

– Suicide is the third leading cause of death among 15-24 year-olds.

I can only imagine some of the scenarios behind the statistics. I envision a young gay boy in Arkansas being taunted by his schoolmates. Maybe they steal his books and his backpack or physically abuse him in gym class. Every day is a living hell for him. He can’t go to his parents for help because of their intolerant religious views. Where is his safe haven? I can picture a teenage girl, who is perceived as being a lesbian even though she isn’t sure herself. Other girls circulate hateful commentary about her through Facebook. They snicker at her as she walks down the hallway to her class. She becomes depressed and even more confused. She gets drunk, sits on the edge of a highway overpass and contemplates jumping. Ironically, her feet dangle over graffiti that reads, “faggots go to hell.” Who is there for her?

Just last week, Oklahoma state representative Sally Kern made the asinine assertion that homosexuality is a bigger threat to the United States than terrorism. She said:

“Every day our young people, adults too, but especially our young people, are bombarded at school, in movies, in music, on TV, in the mall, in magazines, they’re bombarded with ‘homosexuality is normal and natural.’ It’s something they have to deal with every day. Fortunately we don’t have to deal with a terrorist attack every day, and that’s what I mean.”

This isn’t the first time that Rep. Kern has uttered such revolting nonsense. In 2008, she made a similar statement about homosexuality and terrorism. (Being an equal opportunity bigot, Rep. Kern has also made racist comments against African Americans, as well as outrageous remarks about women.) Needless to say, she makes my blood boil. I might add that I was born and raised in Oklahoma. I’d like to believe that she only speaks for a lunatic minority but I’m mystified as to why she’s remained in office for 11 years, representing Oklahoma City at that.

At this point, you may be saying to yourself, “Yeah, agreed. This Sally Kern woman is indeed creepy and horrible but what does she have to do with ‘An Evening of Cole Porter’ and a benefit for the Trevor Project?” It’s this: As long as people in leadership positions are making reprehensible and misinformed statements about homosexual people, then all LGBTQ youth are at risk for being bullied. Why? Because when your leader represents hate, then the message is that your community condones it. Sally Kern is a bully of the highest order and her vitriolic rhetoric only encourages other bullies to act out. It is both my responsibility and strong desire to help protect innocent kids from sick people who would seek to harm then for who they are.

Even though I consider myself  a peaceful person, I would like nothing more than to bitch slap Sally Kern and anyone else who causes suffering for LGBTQ youth. But I’m reminded of the words of Martin Luther King Jr.: “Darkness cannot drive out darkness; only light can do that. Hate cannot drive out hate; only love can do that.” In keeping with that, the best way I can help is to be part of the lifeline for kids who desperately need it. This is why I support the work of the Trevor Project. 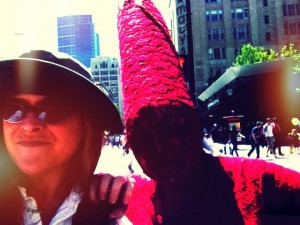 This isn’t the first time that I’ve asked you to help me help the Trevor Project. Last December, your support was key in the success of “My Season of Giving,” my pay-what-you-can holiday download offer, which ultimately helped me raise a generous chunk of change for the Trevor Project. I was and am deeply grateful for the support. But the work of the Trevor Project is ongoing, so if you live in Seattle, I hope you’ll come out for this special show. We’ll be putting our spin on many of the Cole Porter classics, such as “Night & Day,” “I Get a Kick Out of You and “I Love You.” We’ll also be pulling out a few of his more obscure compositions, such as “Give Him the Ooh-La-La” and “At Long Last Love.” I’ll be out with my powerhouse band featuring Randy Halberstadt on piano, Clipper Anderson on bass and Steve Korn on drums. Our plan is to swing hard, have fun and raise money for this very important organization. This one means a lot to me, I hope to see you there.

Our suggested door cover is $15.00, with proceeds going to the Trevor Project. Also, anyone making an additional donation of $50.00 or more will receive a copy of my CD “As the Fates Decide.” To make reservations, please call 206-789-1621 or send an email to events@ballardjamhouse.com.

For more information about the Trevor Project, go here: http://www.thetrevorproject.org/.

A future where the possibilities, opportunities and dreams are the same for all youth, regardless of sexual orientation or gender identity.