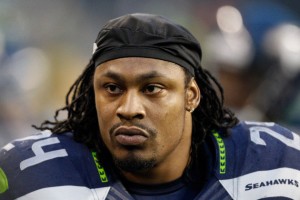 Technically speaking, the NFL was probably within its rights to fine Seattle Seahawk Marshawn Lynch for not talking to the press this season. The League policy states: “Cooperation with the news media is essential to the continuing popularity and financial prosperity of our game and its players. This is an important part of your job, especially in these challenging times when everyone in the NFL must do more to promote our game.” The language in the standard NFL contract says, “Players will cooperate with the news media, and will participate upon request in reasonable activities to promote the Club and the League.” OK, so Lynch was contractually bound to talk to the press and he didn’t. So, the League slapped this silly fine on him, basically, because it could.

But can we get real here?

To start, I don’t think the NFL is having a problem with popularity or financial prosperity. Period. Don’t even get me started on the economics of this whole thing.  For the NFL to claim any kind of fiscal hardship is nothing but an insult, especially to the working stiff who is shelling out significant coin just to get an official NFL-sanctioned team t-shirt for his kid.

After the fine was imposed last week, Marshawn met briefly with the press. Friday’s media session was his first all season. The interview was painful to watch. Marshawn was clearly uncomfortable and the whole thing lasted all of one minute and twenty-three seconds. I’m not exactly sure how this awkward display did anything to enhance the game or the NFL. Why are they putting this man through this?

I don’t know how stringent the NFL typically is in enforcing this media policy but something about the fine on Marshawn feels arbitrary and certainly unnecessary. Why did they go after him? Why force a hardworking but shy man to act as a spokesperson? Is this really a fair or reasonable expectation? Week after week, Marshawn takes a beating out there. Whenever his hands are on that ball, half a dozen guys are usually on top of him. But he grinds it out and takes care of business. Isn’t that enough? This is a man who rushed for 1257 yards this season and scored twelve touchdowns. Beast Mode is far more effective for promoting the game than a two-minute post-game interview.

The NFL needs to pull its head out of its ass. 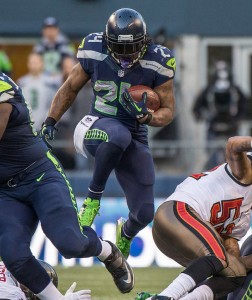 In an episode of ESPN NFL Films, Marshawn gives a blow by blow of his infamous 67-yard touchdown run in the 2011 playoff game in which the Seahawks upset the Saints, 41-36. In this interview, Marshawn is at his best. He’s relaxed, playful and effusive. He’s clearly capable of dealing with the press. But perhaps he’s more comfortable in a controlled environment, as opposed to being thrown in front of a pack of reporters and barraged with questions. Either way, I don’t understand why Marshawn or any player should be forced to speak with the media if he isn’t feeling it. (And when it comes to the Seahawks, there are certainly other players who are more than happy to step up to the mic. My pal Richard Sherman comes to mind. He was, after all, a communications major at Stanford.) It seems Marshawn makes his boldest statements when he’s running down the field with the football. If the powers that be at the NFL had any brains at all, they’d understand that Marshawn best serves the “brand” when he’s doing what he does best, not when he’s talking to reporters.

When I was a kid, I would often ask my Mom why I had to do one thing or another. She would frequently answer with, “Because I said so.” The NFL’s treatment of Marshawn Lynch feels very similar to me. They’re enforcing a policy but the rationale behind it is flimsy and vague. I find it ironic that the whole point of mandating players to speak to the media is to “promote the League” but in this situation involving Marshawn, the NFL just looks like a bunch of assholes.

Marshawn, if you’re reading this, I want you to know that there are a whole lot of fans out here that are on your side. The NFL may have gotten your money. But you got our respect. We’ve got mad love for you, brother. And Beast Mode says enough. Go Hawks!

Postscript: Marshawn appealed the fine with the league and won. However, the appeal is continent on his compliance with the NFL policy on accessibility to the media. Should he fail to make himself available to the press, his fine will double.