Today I’m thinking about venues that present live music verses venues that are pro- music. The former hires musicians to play in their clubs, throws some coin to the band (And, if the band is lucky, a meal and a few drinks.) and folds live music into the overall ambiance of the environment. The bottom line in these joints is usually food and drink sales. The more bodies the band can put in the seats, the better. The latter, however, is specifically about the music. Pro-music venues reflect an overall sensibility as to the value of musicians and what they do. Such establishments put music as the focal point and create an ideal environment for live performances.  Of course, we all appreciate the former; any venue that has live music is certainly better than a venue that doesn’t. I definitely want to give props where props are due. But the latter enriches our communities on a deeper and more lasting level and contribute to the perpetuation of live music in our future.

To the uninitiated, Boxley’s is a swingin’ jazz spot and restaurant on the corner of North Bend Way and Main Street in downtown North Bend. You can’t miss it; there’s a large neon sign hanging directly above the entrance. When you step in the door, the first thing you see is a long table with piles of CD’s from the artists that play there, most of which are on the Pony Boy jazz label. It’s clear from the get go that Boxley’s is serious about music. The spacious dining room has big windows, ample seating and walls adorned with jazz-themed paintings. The stage is front and center in the room. There’s a sparkling Steinway piano, a house drum kit and an outstanding PA system. The sound at Boxley’s could easily be described as pristine. The adjoining bar has a big fireplace, more tables and a couple of fat friendly couches for supreme lounging. For those patrons who are into the music but can’t tear away from the bar, there are video monitors with a live stream of the performance that’s happening in the next room. The space is indeed inviting. However, the thing that makes Boxley’s so appealing is the people. Every single person that works there is upbeat, warm and authentic. Even if you’ve only been there once, there’s a good chance that your waitress will not only remember your name on a subsequent visit, but your drink order as well. Yeah, they’re that good.

The soul force behind Boxley’s is jazz pianist and North Bend businessman Danny Kolke, who opened the club almost two years ago. Running a jazz club is tough, especially during an economic downturn, yet Boxley’s has live music seven nights a week. Danny’s commitment is as unwavering as it is inspired: “Music is more than important to me. It’s nearly everything.” Recognizing that “a restaurant is not a dependable source of funding for live music,” Danny created the Boxley’s Music Fund, which supports everything from publicity for performances and paying musicians to educational clinics and scholarships for students who can’t afford music lessons. Danny has set up multiple ways for would-be patrons to help the nonprofit: corporate sponsorships, direct donations and a monthly subscription plan that gives members assess to a special site with live recordings from shows at Boxley’s. Every Tuesday night, the Future Jazz Heads take the stage. These shows are student performances that feature young up and coming jazzers from the local community. Through the music fund, Danny is not only able to sustain nightly performances but to also give a leg up to the next generation of jazz artists. Danny is equal parts genius and angel. He's also a fantastic piano player and you can catch his trio every Sunday night. 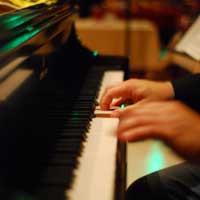 Boxley’s is the home stage for the Pony Boy jazz label, which is headed up by drummer Greg Williamson. Many of the artists that perform at the club are from the Pony Boy “stable” and the monthly calendar offers up a nice mix of instrumental combos, vocalists, solo piano and more. On any given night, musicians from the Seattle scene drop into Boxley’s for a listen or to sit in with the band. There is an inclusive and spirited quality to the Boxley’s hang. It’s a fun place to be whether you’re gigging or not.

In addition to all-of-the-above, Boxley’s has really tasty food. The menu has a nice variety of pastas, salads, sandwiches and entrees. My favorite is the Danny Salad (with delicious grilled salmon), but I’m also fond of the very spicy Capellini Putanesca. Choosing between the two can be torturous. Boxley’s also has a lethal dessert menu (warm chocolate brownie, anyone?) and for those so inclined, a full-bar and a nice wine list. It’s cool to bring kids to Boxley’s. It’s also a dandy spot for a date night.

Every now and then, some folks squawk about the drive to North Bend, which is roughly 30 minutes from Seattle. I say it’s all relative. If this were L.A., nobody would make a peep about the distance. Frankly, I find the drive quite pleasant and with some good tunes for the road, the trip is a snap. Besides, it’s so worth it. (And when you get there, parking is no problemo.) Think getaway.

I’ve been playing and hanging at Boxley’s for roughly a year-ever since I joined forces with Greg and Pony Boy. My first gig there was a voice and piano duo with Reuel Lubag, whom I’d never met or played with before. Reuel is amazing and I had a blast that night. Most nights at Boxley’s are pretty great for me. I’ve made a lot of friends and am always treated well by Danny, Greg and the crew. I feel like I’ve found a true community and a new musical home. Could a person ask for anything more?

If you’ve never been to Boxley’s, you owe yourself a visit. If you’ve been there before, then you know what I’m talking about. Boxley’s is more than a nightspot. It is a place where music is presented with great care and devotion; it is a place where the distinction between “live music” and “pro-music” is crystal clear.

And we are all the better for it.

I will be playing at Boxley’s this Saturday night, August 6th. I’ll be out with a hard-swingin’ band featuring Reuel Lubag on piano, Geoff Cooke on bass & Steve Korn on drums. We have sets at 7pm and 9pm. Boxley’s is located at 101 West North Bend Way, North Bend, WA 98045. For reservations, call 425-292-9307. Check out the website at www.boxleysplace.com.