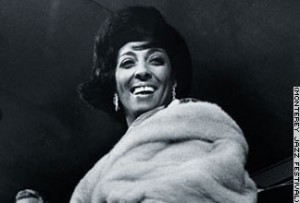 A few weeks ago, I was hanging out at Tula’s, chatting it up with a jazz musician pal. We were talking about jazz venues around the area. The name of one particular club came up and he dismissed it because “they only book chick singers.”

Chick singers. And he said it as if it were a bad thing.

While I don’t want to jump back into the conversation about the curious relationship between jazz vocalists and musicians, I will say that I respectfully disagree with my friend. I’m going to have to go to the mat for my sisters here. I’ve put together a list of jazz singers who bring respect, moxie and brilliance to the tradition of vocal jazz. These women can hold their own with the boys at anytime, in any club or concert hall anywhere. The list includes both living vocalists* as well as those who are no longer with us. Some are famous. Some aren’t but should be. There is no particular order here; “rating” these fine ladies would just be silly. I was going to make this my top-ten but just couldn’t limit myself that way. The truth of the matter is that each of these women brings something different to the table and each makes (or made) her own important contribution to the jazz genre. What they have in common is that they are chick singers and that they kick ass. Let’s do this.

Sarah Vaughan. “The Divine One.” I’m not particularly fond of the term “the whole package,” especially when referring to women. However, Ms. Vaughan could definitely be described as such. She had it all; the big, lush contralto voice, off-the-hook scat chops, stunning versatility, jaw-dropping range and a subtle yet commanding presence. Some of my favorite recordings are of Sarah with the Count Base Orchestra. Her scat solo on “Perdido” could very well be the eighth wonder of the world.

Ella Fitzgerald. If you stopped an average person on the street and asked him/her to name a jazz singer, chances are Ella would be the one. I would say she’s an American icon; whether into jazz or not, everyone knows who Ella was. In my mind, she is the embodiment of swing. Her voice was warm and beautiful. Her intonation was flawless. Of course, her scatting was high art. Ella possessed a natural ease and a palpable humility. I watched a documentary about Ella once and was struck by the simple joy that she brought to the music. “Pure Ella” is one of my favorite vocal jazz recordings. The scat solo on “Blue Skies” alone is worth the purchase of the CD.

Anita O’Day. I have an endless fascination with Anita O’ Day.  With her raspy tone, her percussive brilliance, her short phrases and her feisty and playful demeanor, she possessed a mesmerizing if not ethereal quality. A certain “devil-may-care” sensibility came through her singing; whether in the way she phrased a lyric or attacked a scat solo, she seemed both fearless and slightly aloof. Of course, throughout much of her career, there was heroin and alcohol on board. However, unlike many of her contemporaries, Anita survived her excesses and lived to the ripe old age of 87.  I believe a friend of mine said it best: “Anita O’Day oozed liquid hip.”

Billie Holiday. Billie was probably the first jazz vocalist that I ever listened to. Like Ella, she’s probably also one of the most well known of American jazz singers. Billie’s distinctive voice and phrasing were hers and hers alone. But I suppose that what I most appreciate about Billie Holiday is how she makes me feel. There is an underlying melancholy to her singing: a weariness that seems to get right to the heart of the more existential aspects of the human condition. (At least to me anyway.) I find that raw honesty admirable and meaningful. Of course, Billie penned some of the most powerful tunes in the Great American songbook including “God Bless the Child,” “Don’t Explain,” “Good Morning Heartache” and the chilling “Strange Fruit.” If there were a Mt. Rushmore for American jazz vocalists, Billie’s face would most definitely be on it.

Shirley Horn. Two words: space and patience. In my opinion, Shirley Horn defined backphrasing. Her ability to work with glacially slow tempos, lay back and wait patiently in infinite space was uncanny and brought a depth, drama and elegance to the songs. Her ballads move me like none other.

Rachelle Ferrell. Rachelle is probably my favorite living vocalist. I’ve written about her before. Still, I am always at a bit of a loss as to how to jump in when I’m talking about what she means to me. In my mind, Rachelle Ferrell is one of the most fearless and emotionally honest singers around. She unflinchingly bares all and has the instrument to make it happen. She can soar up to the top of her astonishing six and a half-octave range, scat circles around the moon and back and bend notes like rubber bands. She can growl like a beast or delicately balance a lone, stark note on the edge of a wrenching ballad. She can blow your mind and break your heart all in one song. (www.rachelleferrell.com)

Greta Matassa. Greta is my teacher and also my friend. I’ve mentioned her often here. It’s no secret that she is one of my vocal jazz heroes. There are so many, many things I admire about Greta. I think she is a true instrumentalist and as such, has complete command of her instrument. She’s made an intelligent and exhaustive study of the greats that have gone before her and has assimilated them into her own style. No stone has gone unturned. Greta has put loads of work into developing and fine-tuning every single aspect of her voice. On top of all of these, Greta is truly a great entertainer; she’s smart & funny and has an easy rapport with her audience. She’s also a highly-skilled teacher. She not only knows her stuff but she also knows how to effectively communicate it. Greta’s genius manifests in multiple ways. (www.gretamatassa.com)

Marilyn Keller.  I’ve only been acquainted with this fine Portland vocalist for about a year but oh how I love her. There’s a real special kind of magic to Marilyn. For one, she’s about as soulful as it gets. She’s reduced me to a blubbering puddle of goo on more than one occasion. (Marilyn and Seattle pianist Darin Clendenin have worked up a killer arrangement of Joni Mitchell’s “Both Sides Now.” It brings new meaning to tearjerker.)  For another, her voice is blissfully sweet. Marilyn’s tone is super clean and pretty and although she definitely has power pipes, she uses them judiciously. Her authenticity and her kind spirit shine through, and I think audiences are instantaneously drawn to her. I know I was the first time I heard her sing. I only wish she would make it to Seattle more often. (http://www.reverbnation.com/marilynkeller)

Patti Wicks. How to even start about Patti? Although she’s received international acclaim as both a pianist and a vocalist, she does not possess one iota of pretense. The first time I saw her perform, she did “I’ve Got the World on a String.” She sang the melody straight through, scatted over the form and then sang through it again, this time launching into extemporaneous lyrics about a bowl of potato soup that she’d purchased at Safeway earlier that day. She had me immediately. Patti performs with an ease and flow that seems visceral. She swings impeccably. She scats like a champ. Her connection to the lyrics is evident in her naturally conversational phrasing. And man, oh man, I would give a million bucks to have a voice as deep and sexy as Patti’s. But what I think I like most about Patti is her sense of humor and her playful sensibility. She lays back and lets it happen. We could all learn a thing or two from Patti. (www.pattiwicks.com)

Nancy King. Nancy King is one of those singers that make it look easy. It seems she opens her mouth and music sort of cascades out of it and lands perfectly. This is especially true of her scatting. My two favorite recordings of hers are “Dream Lands” and “Live at Jazz Standard” with Steve Christofferson and Fred Hersch respectively. These particular recordings evoke a very specific summer for me and are very near and dear to my heart. Thusly, so is Ms. King. (http://www.jazzvox.com/nancyking/) 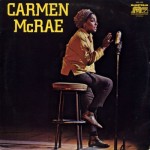 Carmen McRae. I saved the best for last. Carmen McRae is easily my very favorite jazz vocalist. Interestingly enough, it wasn’t always that way.  For a long time, my feelings towards Carmen were benign. I didn’t necessarily dislike her. There were just other vocalists that resonated with me more than she did. And then one summer, I got my heart broken and broken badly. It was one of those unrelenting bleeds that we all unfortunately experience once or twice during our spin on the planet. During this time, a girlfriend gave me the “Live at Ratso’s” recordings. This was when I really discovered Carmen McRae. It was like this old broad, who had seen it all, pulled up her chair, reached through time and spoke directly to me. Every song was like a life preserver: “Would You Believe,” “Lost Up In Loving You,”  “A Letter for Anna Lee”…..all of them. She completely touched me. That summer with Carmen McRae and “Live at Ratso’s” was a spiritual experience for me. And because these were live recordings, I finally came to understand Carmen and her ability to tell the story, lay it all out there and connect to every single person in the audience. I feel like Carmen McRae is my guardian angel and whenever I listen to her, I am full.

These are some of the women that set the standard, at least to my humble ears.  They elevate the game. They are important to jazz music. They forge a path for the rest of us. Chick singers? Oh, hell yes. To steal from (and slightly alter) a bad pop tune, if being a chick singer is bad, then I don’t want to be good.

So this is my list. What about you?  Which chick singers are on your list and why? Comments are open!!

(* For vocalists that are still alive, well and recording, I am including links to their websites.)