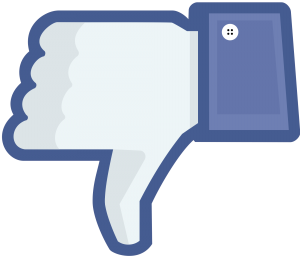 There was some pushing, shoving and panty bunching on Facebook over the past weekend. It resulted in a few folks getting their feathers ruffled and one angry boy taking his ball and going home.

It all started with football. When the Seahawks play, several people, myself included, post commentary throughout the game. It’s an odd way of enjoying the game together. Sometimes I post a lot, sometimes less so. It depends on my mood and how the game is going. I definitely see many posts from fellow fans, of both the Seahawks and other teams. It’s harmless fun and I enjoy the camaraderie.

On Sunday afternoon, a guy that I know, whom I will simply refer to as “Dick,” jumped into a comment thread on one of my posts. He made some disparaging remarks about football and his tone was superior and condescending. I was slightly amused by his comment but mildly annoyed by the sanctimonious edge. It irritated some of my friends. A couple replied to him directly on the thread and a few sent me a private message to express their frustration: “Who is this asshole?” At that point, it was a small incident that didn’t warrant much attention. I didn’t really care.

I do not know Dick particularly well. We have mutual friends and have had pleasant enough encounters in the past, at parties and shows and such. I always thought he was smart and perhaps a little quirky and never had any issues with him. I maybe run into him two or three times a year at most and I don’t even know if he lives in Seattle anymore. Somewhere along the way, we became Facebook friends.

Things got a little stickier when Dick popped up in another thread, again making negative commentary about professional football and again coming across as holier-than-thou. This time I replied. I addressed Dick’s football-related remark and then called him out on his superior tone. A few beats later, another friend jumped in and insulted Dick. I responded to this guy as well and actually stood up for Dick, saying that the day’s trolling behavior aside, Dick was a decent enough dude. My hope was that it would all end there. Unfortunately, Dick wasn’t finished.

A few hours later, I got a personal message from Dick, who was angry about what had transpired. He was offended that I referred to him as a troll and said that I had it backwards, that football is “in everyone’s face” and that people who aren’t into it are harassed and insulted. He included screen shots of my recent posts, apparently to accentuate his point. For the life of me, I did not see one derogatory remark about Dick or anyone else in any of my football posts. I was only making commentary on the game. Yet it seems this was a direct affront to Dick.

Here it is: If you don’t like what your friends are posting on Facebook you can either adjust your settings (i.e. unfollow them) or get the hell off of Facebook. This is what I told Dick. It’s the old “if you can’t stand the heat” routine. While we can’t control the dictates of Facebook’s seemingly random algorithms and what appears in the feed, we do have options for controlling what we don’t want to see. The onus is on each of us to individually take responsibility for our Facebook experience. Claiming victimhood over something that comes through your feed is just silly, especially if it’s football. That’s like crying about rain when you have an umbrella in your hand and you’re standing by the door to the house.

I see a lot of crap on Facebook that I’m not interested in. Biblical verses. Dumb quizzes. You Tube videos of drunken frat boys. Whatever. I ignore it. One guy I know engages in long, rambling and tedious pontification. Half the time, I have no idea what he’s trying to say. But I don’t jump on his thread and start flipping him shit. I just scroll on. There have been a few situations where I decided to unfollow someone. One woman, an acquaintance, kept putting up posts about some jewelry she was selling. After viewing a few dozens of these, I quietly unfollowed her. It was no big deal. I just wasn’t in the market for baubles. In another instance, a friend was regularly posting extremely gruesome photos of victims of bombing on the Gaza strip. These pictures definitely drove home the atrocities and human toll in that conflict. But the images were quite horrific and I wasn’t sure what to do with that visual information. I opted to unfollow. I didn’t expect my friend to censor his posts because they were distasteful to me and I certainly didn’t feel the need to give him a hassle. And this leads me to another point:

If you’re going to wander on to someone’s page or insinuate yourself in a thread for the sole purpose of starting trouble or being a horse’s ass, then you’d better be ready to take whatever pushback happens as a result. When you willfully and intentionally step in shit, you lose the right to complain about the mess and the stench.

I don’t go out of my way to provoke people on Facebook and am mystified by those who do. Let me get back to football as an example. Being the devoted Seahawk fan that I am, I’ve got no love for the San Francisco 49ers. And I was more than a little pleased when the Denver Broncos manhandled them so completely on Sunday Night Football this week. I do, however, have friends who are 49er fans. I didn’t go over to their pages and taunt them. I didn’t gloat in their dismayed threads. I just don’t do that. As my friend Reema says, it’s a little like trespassing on someone else’s lawn. Posting on your own page is one thing. Messing with people on theirs is something all together different.

To be clear, I’ve made my share of missteps on Facebook. I’ve engaged in stupidity that I’ve later regretted–usually some drawn out and futile political debate–and have, at times, been unkind and reckless. But thankfully, I learned from those situations and these days I’m pretty careful as to how I conduct myself out there. Apparently, I was not careful enough for Dick, who abruptly unfriended me. I’m OK with that. He probably should have done it a long time ago. I make no apologies for football.

Perhaps a lot of problems can be solved if we’re more selective about whom we friend in the first place. Being part of a music community, this is gray area for me. Many musicians from the local scene connect on Facebook, whether they know each other or not. I suppose it’s a networking kind of thing. As such, I’m “friends” with people whom I don’t know well personally. I receive an inordinate number of event invitations and requests to like fan pages. It gets to be a bit much sometimes but in the grand scheme, it’s innocuous. Frankly, I’m more annoyed by people who pester me to play Candy Crush and other Facebook games.

Facebook is a vast highway of freaks, angels, geniuses and everything in-between. Given this wild jumble of humanity, all kinds of insane shenanigans are likely to go down and do. There is no sense puffing up and having an aneurism over it. If I’m getting riled up over something on Facebook, then that’s my cue to log off and do something else. Most of us probably spend too damn much time on Facebook anyway but it’s become a cultural staple of sorts. I’m sure one hundred years from now, sociologists will have a field day analyzing its impact. It has definitely created a measure of unfortunate turmoil. I know whole families who have unfriended each other over squabbles on Facebook. Certainly, this past weekend’s upset with Dick is another example of Facebook gone wrong. But on the other side, long lost friends have reconnected and certain populations, such as people dealing with cancer or other diseases, have a forum for support. Facebook is like the Force. It can be used for good or evil.

I like to think that when it comes to behavior on Facebook, common sense would dictate. But that’s probably a little naïve. Human beings are weirdos. We’re messy and thoughtless and like to complicate things. We are tender souls with clumsy manners and hair trigger outrage. We’re smart and we’re stupid at the same time, the ratio depending on the individual. So if common sense is unreliable, then it boils down making a choice as to how we want to be. I think the answer is pretty simple and straightforward: Don’t be a Dick on Facebook.