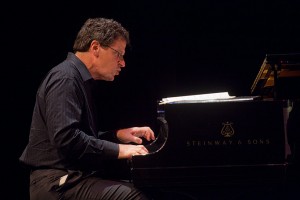 Randy Halberstadt seems to move at the speed of light. It’s no wonder. As one of the top-call jazz pianists in the city, he’s one busy guy. He is a musical rainmaker, lending his touch and expertise to multiple bands, musicians and projects. He is a member of the esteemed Seattle Repertory Jazz Orchestra. He is the accompanist and arranger for many Northwest vocalists, including yours truly. He is also a passionate jazz educator, dividing his time between Cornish College of the Arts, where he is a faculty member, and his own private students. No matter how hard he’s burning, Randy always has a smile on his face, an upbeat demeanor and a contagious sense of humor.

On top of all the aforementioned roles, Randy is also a bandleader and an accomplished composer. To date, he has recorded four CD’s of his own, the latest one being “Flash Point,” (Origin) which was released just last month to much critical praise and hoopla. It is a real treat when Randy steps into the limelight with his own band and music, and this is why I wanted to make some noise about this show.

Tomorrow night’s show will feature Randy’s quintet, with all the same personnel  that played on “Flash Point”: Jeff Johnson on bass, Mark Ivester on drums, Tom Marriott on trumpet & flugelhorn, Mark Taylor on alto sax and, of course, the man himself on piano. It is my hope and expectation that they will perform many of the songs from the recording, which includes six original songs by Randy, as well as three covers, all tastily arranged. From the groove-happy “Woofer” to the achingly beautiful ballad “Unspoken,” the songs of “Flash Point” cover a broad spectrum of mood, feel and color. No matter the songs, Randy’s approach is playful, masterful, fiery and elegant. He is like a force of nature. Randy and this most excellent band are sure to pack a dizzying and very satisfying punch. There is no question in my mind that this will be a fantastic performance, and I am grateful that the good people at the Earshot Jazz Festival are giving Randy a night in the spotlight.

Extra! Extra! Randy has been featured on the cover of the November issue of Earshot Jazz. Pick one up tomorrow night at Tula’s!