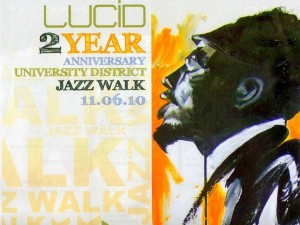 One of the cool things about the Earshot Jazz Festival is the big line-up of outstanding artists and the plethora of performances to choose from. The downside is that it can be difficult to find the time to hit all the shows you want to and it can also get a little spendy. This is just one of the reasons that the University District Jazz Walk is such a great offering. This year, Earshot has teamed up with the spunky Lucid Jazz Lounge, which is presenting the jazz walk in celebration of its second anniversary. The jazz walk will feature performances in 16 venues throughout the University district, and one cover gains access to all of the shows. This is the second year for Lucid to present the jazz walk and the first year for Earshot to partner with club.

There’s going to be a whole lotta great music happening on the walk this year. There are more artists than I can cover here but I thought I could at least highlight a few notable acts worth checking out:

Dave Anderson is a top-notch sax player (alto & soprano), a great composer and a fellow label mate at Pony Boy Records. His new CD “Clarity” was released earlier this year and has received critical acclaim. Doug Simpson of “Audiophile Audition” described Dave’s playing as “harmonically opulent.”  I agree. Dave and his quartet will be playing at the Knarr Tavern.

I don’t know Katrina personally but have heard her sing on a handful of occasions. This chick is the real deal. She not only has a deliciously soulful sound that is oh, so easy to listen to but she is versatile as hell, which is clearly indicated by the variety of projects she’s involved in. Katrina will be doing a duo gig with pianist Tim Kennedy, and they will be performing at the Caspian Grill.

There is no way that I couldn’t put in a word for two of my favorite players on the scene. Trumpeter Jason Parker and pianist Josh Rawlings are long-time musical collaborators and are also business partners in J & J Music, one of this year’s sponsors of the jazz walk. These two share a great connection which manifests in a synergy that is really delightful. They exude an infectious joy when they play together, and I always leave their performances with a big, ol’ smile on my face. Jason and Josh will be playing originals, standards and more at Mars Bistro.

The Legacy Quartet is led by the much-beloved Seattle drummer Clarence Acox and performs regularly at the New Orleans Restaurant in Pioneer Square. For this show, the band is doing a tribute to the great Seattle tenor player Hadley Caliman, who passed away just this last September. The Legacy Quartet will be one of the featured acts at Lucid.

Vocalist and instrumentalist Bernie Jacobs is a longtime fixture on the Seattle scene. One of my favorite musical moments ever involved Bernie. I’d dropped into the New Orleans to see the aforementioned Legacy Quartet and Bernie was sitting in on flute. The band played “So What” and Bernie blew a magical solo that took my breath away.  I’ve since seen him perform many times, both as a vocalist and an instrumentalist. (In addition to flute, Bernie plays sax.) Bernie performs regularly around town and is a frequent guest with the Seattle Repertory Jazz Orchestra. He’s the consummate pro and a class act all around. Bernie and his crew will also be performing at Lucid.

If I had to use one word to describe this bunch, it would be ambitious. The YPCO is a Big Band comprised of up and coming musicians from the Garfield and Roosevelt High jazz programs. It is led by Garfield pianist Julian Garvue, who is a freakishly commanding player. (The kid has some serious chops. He is adventurous, innovative and plays with  a joie de vivre that is atypical for such a young musician.) For this performance, they have put together arrangements of some Maria Schneider compositions, and I know from the Garfield parent grapevine that they’ve been rehearsing the hell out of them. I think this will be a really inspiring show. YPCO will be appearing at Wing-It Productions.

And last but certainly not least…….

I would be a real bonehead if I didn’t plug my own performance on the walk. I will be playing at the District Lounge in the Hotel Deca. It’s a cool, old hotel with an acoustic piano on site. Joining me will be Darin Clendenin on piano and Clipper Anderson on bass. Obviously, with these two on tap, it will be a really fun romp. I will be doing tunes from my new CD “As the Fates Decide” as well as some new songs that I’ve recently learned. Please drop by our set!

While I’m making noise about the jazz walk, I’d also like to mention Off Broadway Seattle, a new event production company founded by Seattle vocalist Richelle Gay. Off Broadway Seattle is partnering with the walk to present dinner shows at five of the venues on the walk, including the District Lounge where I will be performing. Richelle has big plans for her new venture. In 2012, Off Broadway Seattle will become a bona fide nightspot, modeled after the famous Cotton Club of Harlem. I’m excited for Richelle and dig her chutzpa. I admire women who go after what they want.

The cover for the U-District Jazz Walk is ten bucks. This not only gets you access to all of the venues but also drink specials, a complimentary “Lucid Live” CD and a raffle ticket for a chance to win a Lucid gift card. The dinner shows are $35.00, and that price also includes all of the above. For the complete schedule and more information, check out www.udistrictjazzwalk.com.

This is going to be one fun party. I am very much looking forward my gig with Clipper and Darin and also to hitting the walk after my set. Big thanks to the organizers of the walk and best wishes for what I am sure will be a great night. See you at the U-District Jazz Walk, baby!