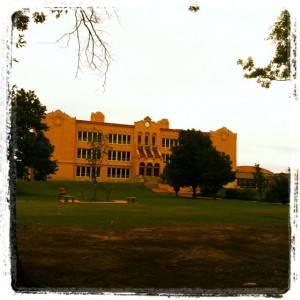 OK, I’m having a mom conundrum. This particular issue spins around and around in my brain like a crazy dog endlessly chasing its tail. Sometimes it keeps me up nights. It’s certainly caused some considerable drama in our household over the past few years. In the big picture scheme of it all, I’m not even sure if all my fuss and worry is warranted.

The issue I’m talking about is education.

We have a struggle on our hands at present. Without going into all the details, I’ll just say that my teen animal has had some academic challenges this year. At points, it’s been a tumultuous ride. I’m navigating a parental balancing act that teeters between sitting back and giving the kid space and opportunity to handle his affairs and responsibly stepping in when it seems critical that I do so. It often feels that no matter which way I step, there’s a landmine waiting to blow. I’ve spent months trying to find the sweet spot between what the kid says and what the school says, two stories that are frequently in conflict with each other. Adding to the stress and confusion is the simple truth that I honestly don’t know how I feel about any of it.

On the one hand, I am of the opinion that putting in the twelve years of compulsory education is part of the life dance. We all have to do it. When you’re a kid, it’s your job. While I’ve never expected my kids to get straight A’s or become National Merit scholars, I do expect them to take care of business, pass classes and avoid becoming fifth year seniors or flunking out entirely. These expectations seem reasonable to me. On the other hand, I question the relevance of some of the required courses and I certainly question the colossal amount of homework assigned each night.  They already have my kid for six hours a day. Why do they need to pile on so much more? Finally, I think that teachers are often shackled by the mandate to teach to certain “measurable” metrics (i.e. standardized tests) and I wonder how much this inhibits their creativity and intuition. I also wonder how much flexibility they have in their approach to the various learning styles of their students.

I do recognize that in some instances, the process of learning a subject is more valuable than the actual content of the class itself.  I get that. But I also wonder how many hours are spent memorizing useless information that will be regurgitated for testing purposes and then forgotten forever. As I think all of this over, it seems worthwhile to look at my own life experience for insight. The following is a list of subjects that were ultimately useful in my life trajectory, as well as those that were a waste of time.

1. English classes.  When I learned grammar, I came to understand that at its core, writing is fundamentally an exercise in rhythm. This is probably the single most important lesson that I took away from all my years in school. It was also the most empowering.

2. Vocabulary. When I was in high school, this course was elective and was taught independently of English. I remember this class very well. It was my first introduction to the amazing and vast playground of words that would be at my disposal throughout my life as a writer.

3. Spanish. I certainly was not the best student in Spanish class and I don’t consider myself to be fluent at all. That said, I’ve had and continue to have many occasions to use Spanish and always seem to get by, save a fumbled conjugation here and there. My neighbor Guillermo, who is from El Salvador, claims that my Spanish chops are getting better and better.

4. American History & Civics. Although these were separate classes, I’ve always felt they went hand in hand. Understanding the history of how our nation was formed is fundamental and it behooves us all to know our rights and how our government is run. With firm roots in both of these subjects, I believe I’ve been able to think critically about what freedom means to me and to make meaningful choices when I vote. This knowledge has also empowered me to be vocal and to fight hard for what I believe in.

5. Music. I started out on alto saxophone and later moved on to the school choir. Music class is where I first learned theory. Admittedly, I forgot a lot and had to unearth it all again as an adult piano student. But the seeds were planted early.

6. Drama. What can I say? This class gave me permission to unleash, take chances and express myself. It also gave me experience getting up in front of people and doing my thing. This has come in handy at many points throughout my life, especially in my jazz career.

7. Art. I’m not naturally inclined toward visual expression and don’t know that art class is something I’ve carried into my adult life so much. However, I have to include it here because my high school art teacher–Maxine Warren– was such a wonder. She was also a bit of a healer. Mrs. Beavers, my elementary school art teacher, used to get enraged and slap my hands because I was messy. She also berated me in front of my parents at a school open house, telling them that I would never be as good of an artist as my sister. Mrs. Beavers was a bitter, miserable hag, who shouldn’t have been teaching art and who definitely should not have been allowed anywhere near children. Not to be overly dramatic, but that experience was a little traumatic for me and I avoided art classes like the plague after that. In high school, my boyfriend at the time encouraged me to take an art class with Mrs. Warren and I signed on for a textiles class.  Her Zen-like presence and warm enthusiasm made it safe for me to do art again. She played music in her classroom, which was a refuge from the clamor of the rest of the school. She was always positive and never authoritative…ever. Although I don’t really pursue much in the way of visual art today, art class with Mrs. Warren was meaningful to me all the same because it taught me how important kindness and compassion are to the creative process.

1. Algebra. I took more algebra classes than I can remember and probably killed off a few forests from all the paper I used doing algebra homework. I’ve never had use for it as an adult. Never.

2. European History. OK, of course, some European history is definitely tied to American history. Clearly, I can’t dismiss it all. But beyond that, my European History classes were about memorizing a whole bunch of facts about hundreds of guys named George and Henry. I retained very little and used even less of it.

3. Home Economics. I set off the smoke detector in my apartment every time I cook something. Need I say more? I don’t even think they still teach home economics anyway.

4. Some literature classes. I know this is probably a little strange coming from a writer, but there were several literature classes that just weren’t particularly meaningful to me and did not have a lasting impact on my intellectual sensibility. I think part of the problem was that 98% of the authors I read in high school (and college) were male. I read a lot of shorts stories and novels that I just couldn’t relate to. While I suppose I get the literary relevance of those authors, the female perspective was sorely lacking in many of the literature classes that I took as a young woman.

I want to say a word about the various science classes (biology, physics, etc.) that I took over the years. I didn’t include them on either list because I’m undecided about them. I think it’s important to understand the laws of nature and the universe and although these classes tended to be hard for me, they were interesting. However, for as much as I struggled, I’m not sure there was much of a gain in terms of real life application. (I am willing to be challenged on this and invite you to do so in the comments section.) I think that at the end of the day, there are certain subjects that are easier for us to grasp than others. The question is whether or not they’re worth the effort in the grand scheme.

So how much or little does our education shape who we will ultimately become? There are certainly examples on both ends of the spectrum. There are the hardworking, straight -A students who become rock star scientists and cancer researchers. There are also academic ne’re-do-wells who go on to launch major software companies or write the great American novel. My own kids are rocket science smart but unmotivated and uninspired. So where does the problem lie? Or is there even a problem? As a mom, it’s a tough line to walk. We want our kids to be equipped to survive in the world and education has a significant impact on that, or so we’re conditioned to believe. But I also feel that kids waste a lot of time digesting crap when they could be developing other talents. We may be leaving no child behind but where in the hell are we going in the first place?

The comments are now open. I would love to hear your thoughts and for you to share your stories about what impact your compulsory education has had on your adult life.