God, Christmas & What We Choose to Believe

Be grateful for all circumstances

Because it is God’s will.

This message appeared on the reader board of a Lutheran church in my neighborhood. I have driven past it several times over the past few weeks and every time I see it, it provokes me just a little. The question of God’s will, especially relative to faith, is a curious one to me. Given the climate of the world today, this seems like something worth poking at a little. And of course, any discussion of God’s will should probably include Jesus Christ. Given that Christmas is just a few days away, this seems an ideal time to reflect on the sentiments expressed by my Lutheran neighbors.

Before I jump in, I should offer up a personal disclaimer of sorts. I am not exactly a believer. I struggle with the concept of God. While I have experienced some amazing moments of synchronicity and grace in my life, I am basically of the belief that we live in a random and ambiguous universe. I don’t believe that “everything happens for a reason.” If I did, then I would have to buy into the notion that there is some kind of rationale for suffering, be it human or otherwise. I also don’t believe that God “has a plan for me.” If there is a God, then I believe that he or she gave me a brain so that I could make my own plan. Finally, while I’m disinclined to argue the existence or nonexistence of an almighty presence, I can say that I lost faith in God when my first son was stillborn. This is not to say that I am lost. I take great comfort in Buddhism and its eloquent assessment of human suffering. I guess that I should add that I was raised in a Presbyterian family and that the teachings of Christianity are not entirely foreign to me. So, now that my disclaimer has been articulated, I would like to move on with this question:

What if I were a believer?

What if I believed wholeheartedly in God? What if I did believe that everything that happens is indeed God’s will? If I did believe in the notion that God has a master plan for us, then shouldn’t I be willing to buy into the plan completely? If I claim to have faith, then wouldn’t this mean that I trust God? And if I trust God, then wouldn’t I have to be willing to trust that the plan includes everyone, no matter of their ethnicity, religion or sexual orientation?

If I truly trust God, then wouldn’t I accept that it (or he or she) knows what it’s doing?

Persecution in the name of Christianity has never been more rampant than it is in the United States today. Evangelicals and fanatics seem to have hijacked the Christian religion and openly propagate hate speech in the name of God. Much of their intolerance is aimed at gays and lesbians, whom they vilify and slander on a daily basis. Disturbingly, they don’t stop here. Turning a blind eye to the establishment clause, this growing fanatical movement seeks to legislate its bigotry and to deny equal rights to those whom they deem as “sinners.”  It would seem this movement is driven by a questionable interpretation of the scripture. But where in the Bible is there anything about hate? Is there an 11th Commandment that I don’t know about?  I have to wonder if this is really what God had in mind. This question seems particularly poignant now as the Christian world prepares to celebrate the birth of the “Prince of Peace.” 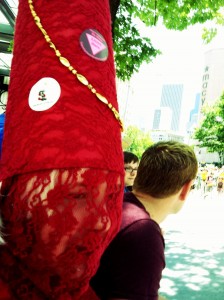 This issue is deeply personal for me.

I am the mother of an openly gay son.  A few months ago, my teenage son Enzo courageously came out to the world as a gay human being. He did so unflinchingly and with great dignity. Enzo has not only given me permission to write about him but has encouraged me to do so. I am enormously proud of him. Enzo is a kind-hearted person with a generous spirit and an emotional intelligence that is beyond his years. He is an incredible artist, a good friend and an old soul. Am I to believe that God would withdraw its love for Enzo because of his sexuality? Or do I believe that Enzo, like everything else on this planet, is the Almighty’s beautiful creation and as such, is an important and intentional part of the master plan?

Why would a Christian choose anything but love?

It seems that within the fanatical Christian movement, the line between proselytizing and persecution is a blurry one. I understand that recruiting new members is a basic tenet of the Christian religion. However, harming others in the name of religion is nothing more than extremism. (I might add that such practices are probably not particularly helpful for recruitment. Who wants to join a religion that is not only intolerant but dangerous as well?) I have to wonder if these types of Christians really do have faith in God.  If everything that happens is God’s will, then what are they so afraid of? If they really trust God to run the show, then why do they believe, for example, that allowing gay people the right to marry will destroy the sanctity of the institution? Where is the faith in that? Why don’t they give him the benefit of the doubt? And why do they feel the need to hunt down “sinners” on God’s behalf? Don’t they trust that God has that covered? If they truly love God, then why would they scorn his children?

As I said, I grew up in the Presbyterian Church. Although I no longer consider myself a Christian, I do believe Jesus Christ existed. I don’t buy into the Son of God theory but I do believe that Jesus roamed the earth as an extraordinarily enlightened being, much like Gandhi or Buddha. One of my favorite childhood Christmas memories is of the candlelight service that our church held every Christmas Eve at midnight. I still vividly recall the beauty of the candles in the sanctuary, the familiar hymns (along with my grandmother’s operatic warbling) and the overall sense of mystery and wonder that filled the space. This is where I came to know Jesus. He was kind and benevolent and he loved everyone.

I understand that there are compassionate and loving Christians in the world. I sometimes wonder if they are outraged by some of the things that are being done in the name of their religion. If they are, I wish their voices were louder. I also wonder if Jesus is out there somewhere, facepalming himself. Did his presence have any meaning at all?

If we are to attribute the workings and mysteries of the world to God’s will, then we cannot cherry pick which parts of the master plan to keep and which to reject. My understanding of faith is that it’s an “all-in” proposition. If there is an intelligent design, then I have to believe that it is all-inclusive; that homosexuals are equal to heterosexuals; that Muslims and are equal to Christians and so on. But it seems that before anyone can claim to know God’s will, one must first come to know God. It is a personal and, for some, lifelong process. It is a deep excavation. I don’t believe that we are here to hate each other.  Although my own dealings with God are admittedly dubious, I have to believe that the ultimate plan starts with love.

“Love does no harm to a neighbor. Therefore love is the fulfillment of the law.”