Greeting the Seahawks: Our Wild Night at SeaTac

It was one of those “one thing led to another” situations. I was hanging out with Lora and Jeff, my faithful football buddies. Whenever the Seahawks play, we’re together. We yell at the TV and each other. We jump around. We celebrate. We represent. We’re crazy for our team and we rock it hard. Although there are other good fans at our weekly gathering, Lora and Jeff are my mainstays. If there’s a heaven and I go there when I die, it will certainly involve watching football with those two. Of course, that’s assuming they go before I do. But I digress. Last night, we were sitting around, dejected after the Seahawk’s two-point loss to the 49ers. We were sort of watching the Saints/Panthers game that was on in the background. Mostly, we were just commiserating and nibbling on snack food, even though we were long past the point of satiation. (How much Trader Joe’s popcorn can one woman eat for God’s sake?)  Somehow we got on the subject of Seahawk fans going to the airport to meet the team when it returns from a road game. The discussion quickly turned to questions as to where exactly you would go and how you would know what time to be there. Our wheels started turning. Just for the hell of it, we threw it out on Twitter. It was a simple Tweet: “Hey #12thMan! When do the #Seahawks get home & where can we greet the plane?” Within minutes, @BigLo66, an uber Seattle sports fan and blogger, gave us the low down. The Seahawks would be arriving at 8:51pm and the gathering spot was the La Quinta at SeaTac. Lora, Jeff and I looked at each other, the motor of our collective insanity slowly revving up. It was 27 degrees out. And to be clear, greeting the Seahawks at the airport does not involve face-to-face high fives with the players and Coach Carroll. It’s about standing out on the street on a frigid night and watching the team busses roll by. We grabbed our coats and jumped in the car.

The drive to 188th & 28th Ave. S. in SeaTac was highly entertaining. Jeff is one hysterically funny cat. As we blew down I-5, he described an imaginary scenario involving a jet ski and a dialogue with Brandon Mebane. I was laughing so hard that my eyes were tearing up and my diaphragm ached. I could hardly drive. By the time we arrived at SeaTac, we were ridiculously dippy and ready for anything.

The scene at La Quinta was jolly rollicking madness. About 50-60 fans were lined up alongside a road that runs out of the terminal and behind the motel. There were a few news trucks parked around. The vibe was rowdy and euphoric. People were howling. Horns were honking. Someone was running up and down the road, waving a giant 12th Man flag. Music was thumping. There was some group chanting. There were also plenty of solo shout outs. I wondered if the guests at La Quinta were getting any sleep. But the pull of the 12th man revelry proved too powerful to resist. I jumped into the fray and let loose with a loud, “Seahawk football!” I was met with an instantaneous roar of approval. It was titillating. I felt oddly at home. About a beat after we arrived, word went through the crowd that the Seahawk plane had just landed. The flame of anticipation cranked up. Of course, people sported all kinds of Seahawks gear- hats, jerseys, jackets, gloves, blankets the like. A couple of cars were completely tricked out with Seahawk paint jobs. Some people were wearing blue glow-in-the-dark necklaces. One dude  manually triggered his car alarm  to go off when the Seahawk busses went by. This tribe does not mess round.

Lora struck up a conversation with a woman who I would describe as a veteran diehard.  She told us her whole name but the only part I caught was “Shehawk.” She’s been greeting the Hawks at SeaTac for years and gave us the scoop as to how it would all go down when the busses finally pulled out of the terminal. Lora asked her a lot of questions. Shehawk is a member of a Seahawks booster group and told us that if we joined, it would give us “guaranteed access” to the players. She goes to a lot of charitable events involving the team. She whipped out her phone and showed us pictures:  her with Russell Okung, her with Doug Baldwin, her with my hero Richard Sherman. (I felt a momentary pang of envy on that one.) She said that Richard’s mom friended her on Facebook. Shehawk even had a pair of lime green Seahawk stilettos. Lora and I were impressed. This chick was the high priestess of Seahawks. I consider myself to be a pretty a rabid fan but after meeting Shehawk, I felt like a lightweight. 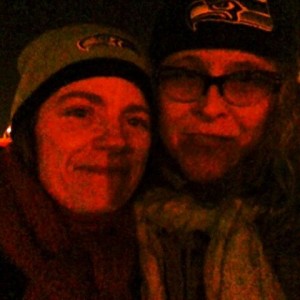 The big event lasted all of two minutes.  A police escort rolled out first and blocked the intersection for the team busses, of which there are three. As the busses went by, the crowd, myself included, went completely berserk. (Imagine whirling dervishes mainlining Turkish coffee. If that image doesn’t work for you, try banshees on crack.) We were able to make out silhouettes of some of the players through the windows and from what I could tell, a few waved at us. One player at the back of bus three seemed to be looking at his mobile device, oblivious to the frenzied spectacle outside. We hollered and danced and put our hands in the air. And then it was over.

On a side note: How cool would it be if we all had welcoming committees like that? Think about it. You get off work after a shitty day, or even a great one. You walk outside your workplace and there’s a delirious throng of admirers cheering you on. It would feel pretty flippin’ great, wouldn’t it? Maybe the world needs more unfettered enthusiasm like that.

I wish I could have documented our adventure with photos and video.  Unfortunately, the charge on my phone zonked out within minutes of our arrival. However, I was able to quickly get a couple of grainy shots. Still, nothing compares to being there in real time. As we drove home, we cranked up the heater to thaw out our frozen toes. We couldn’t believe what we’d just experienced or that we’d even gone in the first place. But we were glad we did.  When you finally lose your mind (as we clearly had), it can be a lot of fun.  We saw the Seahawks (kind of) and we had just rubbed elbows with super fans! These are an elite class. They operate on a level that the rest of us can only dream of. But they graciously welcomed us into the circle. I was awestruck. And even though the Seahawks got beat this time, the scene at SeaTac was a happy one.  When the game is over and you’re bringing it back home,  love doesn’t care whether you win or lose. 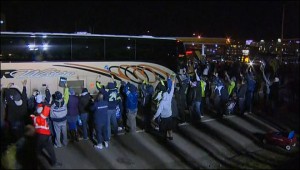