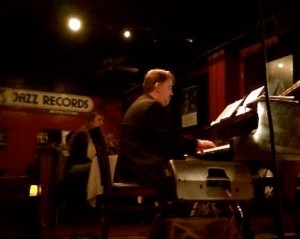 It was a real treat to see Darin Clendenin and his mighty quartet burning up the bandstand at Tula’s last Friday night. Darin is one of the region’s top-gun pianists. He’s also one of the hardest working. Because he’s in such high demand by various bandleaders and vocalists, he doesn’t get out with his own group very often. As such, I feel fortunate to have caught this show. It was a great night.

Darin plays with his own unique elegance. He’s sensitive and fluid, and each note has an undertone of poignancy. He’s also beautifully intuitive. He has an innate sense of what the music needs in any given moment and infuses the bandstand with a Zen-like steadiness. (This is one reason he is the first-call accompanist for so many vocalists around town.) Finally, his facility is boundless; he can play to whatever style, dynamic or groove that the song calls for, yet his distinctive voice is ever present. To see and hear him unleash for an evening of mostly instrumental music was soul satisfying and a whole lot of fun.

Darin’s band features his longtime colleagues Clipper Anderson on bass, Mark Ivester on drums and Jeff Busch on percussion. This exquisite team has worked on a variety of projects together– including solo recordings for both Darin and Clipper– and share an almost otherworldly synergy. On this performance, there was an especially high charge between Mark and Jeff. This led to several thrilling percussive moments, followed by mad applause from a very happy crowd. 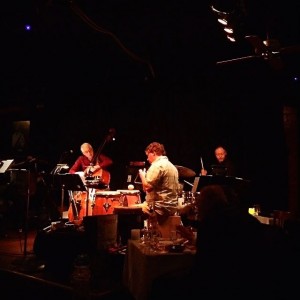 The song list for the evening was eclectic. Darin and the band played selections from a variety of composers – Kenny Barron, Antonio Carlos Jobim, George Cables, Herbie Hancock, Alan Pasqua and more – and also original songs from Darin’s CD “Revenir.” Some highlights: “Agua de Beber,” with some super cool reharmonizations; Nat Simon’s driving “Poinciana,” which Clipper recorded on his CD “The Road Home;” and Darin’s exotic anthem “Nigerian Prayer.” The evening also had a couple of vocal interludes featuring Clipper, who did a particularly nice job with Billy Strayhorn’s melancholy “Blood Count.”

There was a good crowd at Tula’s. Most of the tables were full. I was pleased and not surprised that so many people came out for the show. If the size and enthusiasm of the audience are any indicators, perhaps Darin and the crew should play out more often.