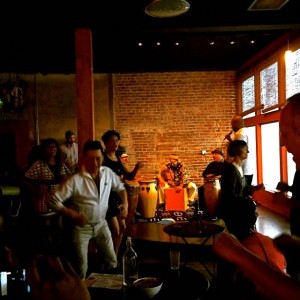 It was a whole lot of fun bopping around the Jackson Street Jazz Walk last night. Clubs, restaurants and studios along the walk were packed to capacity. Lots of  people were out and about; strolling the sidewalks, meeting and greeting and taking in the sights and sounds. There was even a taco truck for the hungry crowds. Jackson Street was jumping once again.

There were numerous acts performing across multiple venues, and the music ran from 4pm until midnight. I did not hit the scene until around 7pm and, unfortunately, did not catch every performance. But it was still a satisfying evening with many highlights.

I started off at Jaam Rek, where I caught the end of a set by Bembe Olele. The room was infused with the steady pulse of Afro-Cuban percussion, and pretty much everyone in the space was up and dancing. It most definitely set a celebratory tone for my evening. I might add that Jaam Rek is a really extraordinary spot for live music.  I love the look and feel ­­­­–­­ from the exposed bricks to the scent of burning sage that floats through the air— and the vibe is casual and inclusive. It’s like you’re at a party in someone’s very cool loft. I’ve been to other shows there before and was glad that it was one of the venues for the walk.

After the Bembe Olele set, I wandered down to catch Danny Quintero at Wonder Bar, a comfortable, friendly Ethiopian restaurant that felt well-suited to host live music. Danny is an ace entertainer who respectfully carries on the classic tradition of male crooners such as Tony Bennett and Frank Sinatra. Crowds always love Danny and last night was no exception. His was a fun set.

My next stop was the Lake Chad Café to see the Ari Joshua Group. At my first peek in the window, it looked as if there wasn’t room for any more bodies; but the owner was kind enough to open a side door, which granted me access and enough space to stand and enjoy the music. Ari and company ripped it up with what I would characterize as funky guitar/organ jazz. Ron Weinstein was screaming on the Hammond B3, and my favorite from that set was an extended romp through “A Night in Tunisia.” The guys laid it down and went way up in it. Sweetness.

I left the Lake Chad Café and started to make my way to the Pratt Fine Arts Center, which had all kinds of stuff going on, but ended up back at the Wonder Bar to listen to Gail Pettis. Gail is an elegant, soulful and technically pristine vocalist. I would give anything to sing with the velvet finesse that she does. The room was a little loud and chatty at that point, but Gail’s set was lovely. It was great to see and hear her again. It had been awhile. 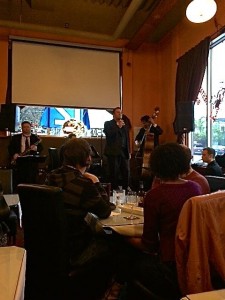 I ended up back at Jaam Rek for that sweet phantasmagoria that is Industrial Revelation. I was mesmerized. This band unleashes with a gleeful ferocity like I’ve never seen before. They soar effortlessly across multiple genres, weaving whatever dynamics the moment calls for, infusing it all with enthusiastic abandon, then blowing it open in what felt like a tsunami of joy and love. The mastery of this band is indisputable, and it feels as if they are being held by something higher– God, the Universe or whatever. I was completely blissed-out. I left that set thinking deeply about my own relationship to the creative divine and the expanse of possibility therein.

My evening wound down back at the Wonder Bar. Congress played a relaxed set with laid-back grooves, tasty improvisation and super pleasing harmonics. Seeing TK in the Seahawks hat, which seems to be his signature of late, added a nice visual perk. This was the perfect end to a great night.

Deep bows go to Jackson Commons and Isola Homes for putting together a fantastic and free event. The walk was accessible to everyone. And I was especially impressed by the high level of musicianship represented. The organizers culled from some of the best musicians in the city and treated fans to an outstanding line-up of top-tier artists of many styles. While I regret that I didn’t see everyone on the bill, I do feel that I savored every second of the performances I did catch.

I am grateful to live in a city that is rich with so many musical options. Live music is everywhere, presented through a variety of forums. And the abundant artistry of the scene is astounding. As I drove home last night, I visualized a similar event in my neighborhood, Beacon Hill. What if every neighborhood in Seattle had its own jazz (or blues or hip hop or soul) walk? Seems to me that anything is possible.