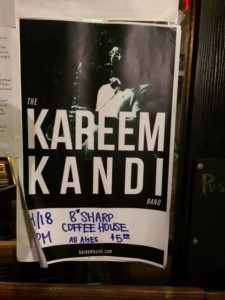 On Saturday night, I made a trek down to Tacoma to see the Kareem Kandi Band. I had not seen the band in a few months, and it was fun to check out a new (for me) scene at the B Sharp Coffee House. My close friend and fellow vocalist Cara Francis, who is also a piano student of Kareem’s, joined me for the evening. Jazz and a girls’ night out were the perfect combo.

The Kareem Kandi Band is a powerhouse organ trio that features Delvon Lamarr on Hammond B3, D’Vonne Lewis on drums and Kareem on tenor sax. This is as tight a group as any in these parts. They launch from a foundation of straight-ahead jazz, but readily infuse the songs with a range of styles and grooves as the moment dictates. The band’s collective command of dynamics is particularly striking. Every tune has an organic, satisfying and intelligent arc, with vivid aural colors throughout. This show was the musical equivalent of an action movie, and I was on the edge of my seat all night.

There were many high points on this happy ride. The band played a blistering fast “You Make Me Feel So Young,” with Kareem blowing high-speed bebop lines with unflappable ease. On the other end of the spectrum was “Stardust,” which the band rolled out slowly and dreamily, evoking sweet nostalgia for eras long gone. Things got funky with “Guess Again,” an original by Kareem. The band established the groove and then unleashed. The get down was mighty. It was all I could do to keep myself from dancing on the table. Someone in the audience requested the ever wistful “Ain’t No Sunshine.” Despite Kareem’s disclaimer that he didn’t know the tune very well, the band took it on and completely delivered. Tacoma blues guitarist Dean Reichert sat in. This was my first time to hear Dean play. I was mesmerized and reminded, once again, as to the depth of talent we have around the region. Kareem’s solo on this one was pure soul.

There is a diversity of riches in this trio. Kareem has a technical prowess that’s simply lethal. I believe you could throw anything at this guy and he could play it. Beneath it all is a steady demeanor, a patience and an unharried sensibility, no matter the tempo of any given tune. He trusts the music and he trusts himself. As cornball as the analogy might be, Delvon’s playing is like a big, comfy easy chair. I wanted to fall into his sound, cozy up and lounge there indefinitely. Listening is mediation to Delvon. It’s evident from just watching him close his eyes and lean into the music. He’s also not afraid to hang out with an idea for a while and fiddle with it, skillfully integrating it into his solo. D’Vonne brings a unique effervescence to the bandstand. As a soloist, he is all kinds of shock and awe, which is made all the better by the sheer joy of his approach. But even in the background, he plays with inspired nuance‑ a mini-fill here, the slight brush of the cymbal there. I can only imagine what it must be like to live with that much rhythm in your heart and body. 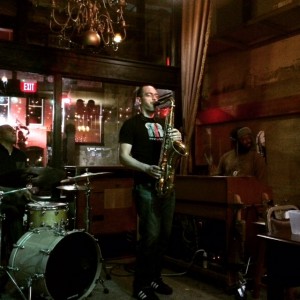 As a leader, Kareem is the epitome of class. When he introduces the band, he is extensive in his praise of each member and always says a word or two about their respective backgrounds. Kareem is also generous. In addition to Dean Reichert, Cara and I were both invited to sit in. Singing with those guys was a blissful buzz. A vocalist could get addicted to a band like that.

The B Sharp Coffee House is a great setting for live music. It’s an old room with concrete walls and floors, exposed beams and industrial pipes of some sort, all adorned with strings of white lights, table lamps and retro furniture. Cara aptly described it as “steampunk vintage.” The acoustics were fine. The crowd was polite and attentive; there wasn’t a lot of table chatter. And the music drew a steady flow of onlookers peering into the large front window. Service at the B Sharp was friendly but slightly inept. It didn’t matter. The food was tasty and the music completely overshadowed any small annoyances of the night.

On April 30, B Sharp will be hosting a performance with members of the house band from Smalls Jazz Club in New York City. The show will feature Peter Bernstein on guitar, Spike Wilner on piano, Grant Stewart on saxophone and Joe Magnarelli on trumpet, along with Northwest musicians Michael Glynn on bass and Julian MacDonough on drums. This show is part of a multi-city concert series that Kareem is co-presenting with a collaborative of jazz musicians from around the region. For more information about the show, go to: www.bsharpcoffeehouse.com

Kareem and the band have many performances coming up this week. I strongly encourage you to catch one. Check out Kareem’s website for the low down: http://kareemkandi.com