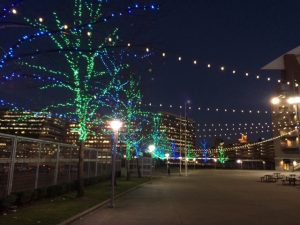 It’s a little hard to believe that another Thanksgiving is behind us and that there are only five more games left in the regular season of football. We’re officially full-swing into the holidays now, kicked off with the melee of Black Friday, followed by Cyber Monday. Spend baby spend. You know the routine.

My long Thanksgiving weekend was okay. I spent most of Thanksgiving Day on the couch, happily watching football and occasionally catnapping. I’ve been working a lot of hours lately. My body is run down, and having a day to relax was pure bliss. The rest of the weekend was busy. I took care of some odds and ends around the house, worked on an upcoming crowdsourcing campaign and did a few loads of laundry. Saturday night I had a great gig with fun hang after. Sunday was another day devoted to football and down time. I couldn’t have asked for a better weekend really. But instead of feeling refreshed and rested today, I’ve been cranky, tired and generally out of sorts. I’ve spent the whole day trying to figure out what the hell is wrong with me.

I think I’ve succumbed, perhaps, to the holidaze.

Growing up, the holidays were pretty idyllic. My Mom certainly had her challenges, but when it came to the holidays, she knew how to rock it Our big funky house was decorated from top to bottom; my particular favorite was the aluminum tree in the dining with the multi-colored spinning light positioned just so next to it.  There was always super yummy food (and booze) around and a steady stream of visitors coming through. The house I grew up in was, in a lot of ways, the epicenter of holiday action. I was able to recreate some of this with my own children when they were little. Some of my best holiday memories are from when the E’s were small, cozy in their Christmas PJ’s and wide-eyed with wonder and innocence. We made our own traditions and we were happy.

But the wheel of time can be cruel. It became difficult to sustain magic, especially in the face of disruptive circumstances such as divorce and fiscal hardship. And as the kids got older, part of their individuation was to reject holidays completely. Slowly over time, the air drained out of the season. Over the past several years, there’s been a hit or miss quality when it comes to the holidays. I’ve made an effort to provide exchange students that were living with me some semblance of an American Christmas. I’ve also spent time with friends and their families. But my personal traditions are a thing of the past. I’d be lying if I said I don’t feel a sense of loss around that.

I know I’m not alone here. I think there are plenty of other people who struggle with the season. To varying degrees, most of us have our own version of this. But what I think is exacerbating the malaise-and what may be contributing to my present surly mood-is the shit show surrounding us at present. Christmas, Hanukkah, Winter Solstice, Kwanza and New Year’s Eve will all roll forward as always, but the season is back-dropped with a madness that borders on dystopia. The Commander in Chief is a narcissistic mercurial man-child who degrades the dignity of the office and embarrasses the country (and himself) on a daily basis, one asinine Tweet after another. Every day is a new affront. And every day is a threat as he doggedly pushes policies that harm so many, especially the most vulnerable, while perpetually fanning the flames of rancor, bigotry and division. Checks and balances seem to have broken down. The President’s party is having a  field day trashing health care, ramming through a tax plan that will benefit the wealthy and screw everyone else, deporting dreamers, ending net neutrality, dismissing climate change- the list goes on and on and on. It’s a racist agenda designed to erode Obama’s achievements and legacy. Meanwhile, we’ve hit the streets, called our representatives, written op-ed pieces and expressed our outrage again and again and again. We’re fucking exhausted.

So when you’re standing in a quagmire, slowly sinking, and all your bearings are scrambled…when you no longer recognize the country you thought you knew….when the very stability of democracy is in question and fascism looms…it’s hard to feel the season.  To light candles, raise glasses and carry on with the merriment while we simultaneously tumble towards disaster seems a freakish exercise in cognitive dissonance. I in no way want to dampen the spirits of anyone who’s still experiencing the joy of the season. But for myself, I just can’t reconcile comfort and joy with lunacy and chaos. My only hope is that if there is indeed an angel on high, it comes to us in the form of Robert Mueller.

I don’t really know how to remedy this hard and stubborn ache. I can only come up with some semblance of a plan and hope it helps. I will cherry pick what I want from the season, doing as much or as little as I feel. I’ll hang lights because I like the way they look when I come home at night. I’ll bake goodies for my neighbors and friends. I’ll take in whatever joy I can vicariously. I’ll try to keep the focus on others and to remember the ways in which I’m blessed. I’ll get through it. We all will, just as we have all the other days and weeks of this God-forsaken year. May 2018 reward our weary endurance and restore our collective soul.