How Do We Make Purple? 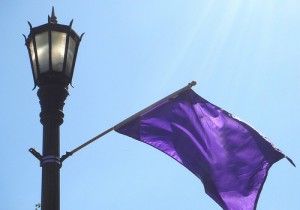 It’s been nearly a week since the election and I’m tired, elated and vastly relieved. My guy won. Big exhale. While I know that not everyone shares my thrill at President Obama’s reelection, I’m willing to bet that the majority of my fellow Americans–on both sides of the fence– are glad that the whole shebang is over.  At least that’s one thing we collectively hold in common. Perhaps that’s a start.

Many of the post-election speeches have made reference to the blistering separation in the country right now and have reiterated that we are the “United” States of America. The idea is that it’s time to work together to rebuild the country and to get past the rigid divide of blue and red. It’s time to make purple. While this all sounds fine and good in theory, how exactly do we do this? Or maybe the better question is: Is it even possible?

When President Obama was elected to his first term, Senate Minority Leader Mitch McConnell made the statement that the GOP’s number one priority was to make sure that Mr. Obama was a “one-term” president and thus launched a new and particularly odious era of political obstructionism. After the President’s reelection last week, students at the University of Mississippi protested, yelling racial slurs and burning photos of Obama and Biden. The ugly vitriol has not been limited to the presidential race. Just this morning, I saw a letter to the editor from an individual from eastern Washington who was disgruntled by the outcome of the gubernatorial race. The letter writer claimed that liberals mess things up for “the rest of us” and went on to suggest that liberals go off and form their own state. Apparently, the liberal majority does not constitute real Washingtonians.

And then, of course, there are these doozies:

“One other thing that we need to come to terms with as a result of last night. What appears to have happened is that the liberal welfare state in this country has now grown. More and more Americans have become dependent on that welfare state. As they have, they have found themselves siding with the party of government.” – Sean Hannity

“If it’s a legitimate rape, the female body has ways to try to shut that whole thing down.” – U.S. Representative Todd Akin

Just who are these people and how does one even begin to “unite” with them?

It seems the logical place to start would be with  a shared foundation of sanity, intelligence and, well, reality. I find it very hard to have a meaningful discourse with someone who honestly believes that President Obama is a Socialist Muslim hellbent on imposing Sharia on the American people. And if establishing a shared reality is challenging, finding a shared value system is even more difficult. How can I vibe with someone who supports a party with a platform that is so stridently anti-women and anti-gay? This is really fundamental stuff here. It gets right down to the nitty gritty core beliefs that we have about other people, about humanity. How can I, as a woman, connect with someone who would violate my privacy and interfere with my right to self-determination? And why would I reach out to anyone who would deny my gay son fundamental equality or, even worse, vilify him in the name of religion? This is my family we’re talking about; my fucking son. The conservative Christian faction of the GOP is especially problematic for me. They are like the American Taliban.  What common ground could I possibly have with people who would harm my child through their actions, deeds and politics?

Of course, many conservatives claim that the Republican Party as it is now does not speak for them. They claim that they’re not like that.  My question to them is: Then where in the hell have you been?  If you’re not behind the platform, then where is your voice?  The Republican Party has been on a wild ride with the loony bus. Why haven’t you stepped in and taken the wheel back?

When considering a monumental riff such as the one we’re facing in this country now, it does seem prudent to consider the old “it takes two to tango” adage.  As such, I try to soul search and think about what the left has done to perpetuate the divide and, on a more personal level, what I have done. I recently “unfriended” someone on Facebook over politics.  This particular “friend” was a Ron Paul supporter and a few days after the election, he came trolling over to my page looking for a fight. I’d already figured out that this person and I were not of like minds when it came to politics and several months ago, I simply adjusted my settings so his posts would not show up in my news feed. I don’t even know why he and I were Facebook friends in the first place. He was an old college friend whom I hadn’t been I touch with for years. Our Facebook connection was more nostalgic than meaningful. When he came wandering on my page trying to start trouble, I wasn’t having it. I gave him a warning. When he persisted, I unfriended him. I suppose some would say that I should have attempted to engage him in some kind of dialogue, you know, in the spirit of making purple. But experience has taught me that little good comes from back and forth on comment threads.

I do know that over the years,  I have been strong and forceful in my opinions, especially when it comes to women’s reproductive issues and gay rights. I have fought like a pit bull and unapologetically so.  But to me, there is no middle ground on either of these issues. A woman’s choices about her body, her reproduction and her health care are hers and hers alone. Period. And all LGBT people deserve the same equal rights under law that the rest of us enjoy. Done. End of discussion.  I suppose then that I could be considered just as guilty as the other guy when it comes to digging in and refusing to budge. Maybe this makes me part of the problem. But in my heart and mind, it’s what’s called doing the right thing.

As many of the pundits have pointed out, the red/blue divide ultimately boils down to a fundamentally different vision for this country. I am a divorced mom of two teenage sons. I bust ass to survive and, contrary to the opinion of the Right Wing, I don’t want anything for myself that I don’t want for everyone. I want a country where everyone has equal access to the necessities of life such as food, shelter, a functional infrastructure, education and affordable health care. I envision a tolerant country where everyone has the right to life, liberty and the pursuit of happiness, no matter their skin color, sexual orientation or gender. I want economic entities to be held accountable for their impact on the rest of us and for justice to be served to the reckless and corrupt. I want to be part of a country where everyone has an equal chance to be successful. I want to live in a country and a world where we give a shit about each other. I consider myself to be an open, compassionate and reasonable person. On most days, I try to look for the grace in all situations.   But I also recognize in myself an unwillingness to compromise on a few very basic things. These are soul issues for me. At present, I don’t know how to remain true to these and also make purple.

I guess the first step would be to try to really find the humanity in the people we disagree with. I believe it would have to start with a one-on-one level. Maybe each and every one of us should “adopt” a person from the “other” political side and commit to one year of dialogue. Maybe we meet up once a week for a year, slowly get to know each other, talk it all out one issue at a time and every so gently see if we can find even a trace of commonality with each other. It would be a social experiment of epic proportion. Sadly, the cynic in me questions the chances for this to really work and my very sanity for even speculating. Maybe I dropped too much acid back in the day.

So here we are. Unfortunately, I know I haven’t offered much. All I’ve done  is to further articulate the conundrum. I guess I’ll throw it back to you. How do we bridge the horrific split in our country?  Is there potential at all? Can we reach that deep into our own reserves of patience, grace and humanity? Or are we too far gone? Can we truly be the United States of America? How do we make purple?

I’m at a loss. I really want to hear from you on this one. The comments are open. Please dive in.

“Every person is stronger now. Every person who was forgotten by God or country is now louder, more defiant, and more determined.”