Mom of a Nomad: Part One 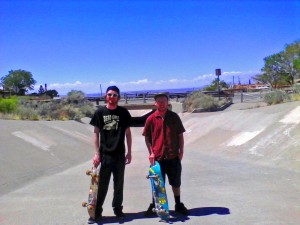 It’s now been roughly two months since my son Emmett took off to live as a nomad; traveling across the United States to see what he can see, to experience new things and to generally explore the magical and mysterious path of life. Since my initial post on this story generated so much interest, it seems an occasional update is in order. This is my first report.

The preliminary part of Emmett’s trek took him through Oregon and down the California coast, with a brief dip into Tijuana, Mexico. He eventually headed east, traveling through Arizona, New Mexico and Colorado. As I write this, he is pulling out of Houston and on his way to New Orleans. Along the way, he has camped at various places. He sent me a photo from a campsite in California, where he was surrounded by what he described as “more species of ducks than I knew existed.” He also spent a night or two in the Apache National Forest.

Communication has been spotty but, overall, much better than I’d anticipated. I text him occasionally. Sometimes he responds. Sometimes he initiates a text exchange with me. He’s random. One night, he sent a photo of a goofy lounge singer in a club in San Diego. Another time, it was a shot of him in the desert someplace. He’s called once. He’s made some stops to visit family members, so I also keep up with him through their reports. Of course, I’m always thrilled to hear from or about him and am heartened that all the news has been positive.

The kid is doing OK out there. 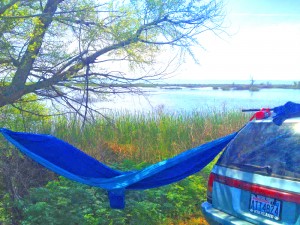 So what about Mom? The grief, which was all-consuming at first, has transformed into a quieter, but still lingering sadness. To reiterate, I believe with all my heart that this is the best thing for Emmett and could not be prouder of him for seizing the world on his own terms. The trick is to figure out what I want now. The parenting books and experts prepare a mom for so much – sleepless nights with cranky babies, terrible-twos, potty-training, homework, tumultuous teens – but there seems to be no go-to guide for this part of the cycle. The empty nest is uncharted territory, and I have no reliable compass. It’s uncomfortable and hard, but I know there is also much potential here. The time is ripe for growth and fresh opportunities. At present, I’m exploring my options, navigating a few unexpected challenges and doing my best to enjoy the present moment, regardless of larger uncertainties. I’m scared and excited at the same time.

When I was growing up, there was a man down the street who still lived with his mother. Even as a kid, I knew there was something unnatural about that (at least in our U.S. culture). As much as I miss Emmett, I know he can’t be here. He shouldn’t be here. He’s young, full of moxie and entirely unfettered. He deserves freedom. And the world needs Emmett in all his feisty glory. Mother’s Day is this coming Sunday. Sure, I hope that he and I connect. But as my sister always says, “grace and ease in all things,” and it certainly applies here. Part of letting go is not having any expectations.

Emmett is a roaming spirit, blazing through the expanse. I am a woman in mid-life, looking inward to figure out the next chapter. Our story is intertwined, but our travels are independent now. Somewhere in all this, there’s a lesson about not taking this all so seriously. After all, it’s just another turn of the wheel. You’d think a weathered bird such as myself would remember that. But damn, this world has a way of keeping us humble. Nothing really ever rolls out like you think it will. I do know this much: Emmett is happy and free. What mother wouldn’t want that for her son? And ultimately, what mother wouldn’t want that for herself?

“How can I match my intrinsic talent with one of the world’s deep needs?”