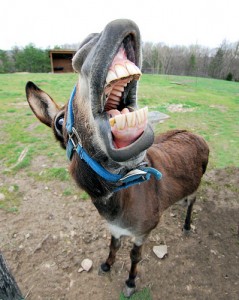 Assholes. Every creative community has a few. They slime around the scene, inflicting varying degrees of unpleasantness and leaving an acrid aftertaste in their wake. Ugh. Assholes aren’t a particularly upbeat thing to write about; neither are cockroaches or plumbing problems. But we all encounter them from time to time, right? It’s good to think about how we might be more skilled at dealing with them. Here are six ideas:

1. Ascertain the degree of assholery you’re dealing with. Not all assholes are created equal. They can run the spectrum from the clueless moron to the textbook narcissist. In the case of the former, their transgressions can be irritating but ultimately benign, such as talking loudly on their cell phones when you’re trying to listen to a set. They’re easy enough to deal with. Politely ask them hang up or take their call outside (just be careful of inebriates). The latter, however, are a trickier problem. They drip with charisma but a dark undercurrent fuels their behavior. These sorts will feed freely on your kindness and then gladly leave you for dead when they’ve had their fill. There’s no fix here. Your best bet is to steer clear completely. And of course, there’s a whole range of assholes between these two extremes–bullshitters, mean critics, smack talkers, time wasters and the like. One thing to keep in mind is that not everyone who presents like an asshole actually is one. Years ago, there was a musician I knew who was super aloof. He came across as unfriendly and arrogant. But out of the blue one night, he plopped himself down at the bar next to me and chatted away, rather candidly. He shared that he’s extremely shy. Social interactions are tough. I don’t know why he decided to connect with me on that particular evening. But I’m grateful for the lesson learned and the new friend made. Get clear on what you’re dealing with.

2. Stand your ground. You don’t have to take abuse from people. Set strong boundaries and enforce them. Cultivate a spine. If the situation calls for it, don’t be afraid to push back. Most assholes aren’t murderers, so the worse that could happen is that you create some kind of uncomfortable scene. Bullies can’t gain any ground if you won’t play. Most of them are full of fear anyway. And remember that you can push back intelligently. I was playing a festival once and the soundman started some completely unnecessary crap with one of my musicians. The dude and I exchanged a few terse words but I ultimately took the problem higher up the ladder. Suffice to say, we were at the festival the following year but the offending soundman was not.

3. Kill ‘em with kindness. Conversely, you can lay on the love so heavily that it will disarm even the biggest asshole. That’s the hope anyway. This is a noble approach and certainly elevates the entire situation. If you can ease the bullshit by making some kind of connection, that’s a pretty powerful win for everyone. I think the key is to be authentic and sincere. Fake love is worse than no love. And while I’m totally on board with peace, love and understanding, the cynic in me cautions that killing with kindness might not always work.

4. Let It Go. In a lot of cases, this is the best option. Assholes just aren’t worth the energy suck. Why let them wiggle into your psyche anymore than you have to? I think this is especially important in situations where you have no control. Sometimes assholes are in a position of “authority”– nasty gallery owners, jerky booking people, condescending editors–and, unfortunately, are calling the shots. There are some people that you will never win with. Don’t waste one more second of your precious life ruminating over them.

5. Double down on your own creative efforts. An encounter with an asshole can be like a canker sore in your  life force. It stings and distracts. It can throw you a little off. The best remedy is to flip that energy into something constructive. Redirect. Go play music. Make art. Write poetry. Dance your ass off. After my most recent run-in with an asshole, I decided to focus more on piano practice. I  felt much better. Creativity is a tried and true remedy for most things actually, not just assholes. Transcend.

6. Focus on the Good Ones. For every rude dumbass or tedious diva who flips you shit, there are a dozen or more good people who are willing to happily lift you up.  Sweet angels. Enthusiastic collaborators. Kindred spirits. Soul sisters. Big hearts. Hang out with these people. There is safety in numbers. And nothing is better for our creative lives than love.

Of course, foremost above all of these suggestions, make sure that you’re not the one being an asshole out there. I’m saying this for all of us, myself included– we all have our moments. Be friendly. Be real. Practice generosity. Boost your fellow artists– go to their openings, make noise about their new CDs, repost their links, pass the tip hat already. Give a deep hug now and then, or an encouraging word. Contribute to the greater ease and flow of your tribe. If nothing else, observe the Buddhist principle to “do no harm.”

Decent human beings outnumber assholes. That’s the good news. But the assholes are still out there. We can’t always avoid them but we do have choices as to how we deal with them.

“Stick with the people who love you and don’t spend a single second on the rest. Life will be better that way.”

6 responses to “Our Creative Lives: Assholes”