Our Creative Lives: My Letter to the Critic

An Open Letter to Mademoiselle Critic

If nothing else, you are indeed predictable.

I had only been off the bandstand for a few brief beats and you were right there, clicking and clucking away at me. Per usual, your hair was pulled back in a tight bun. A pencil skirt hugged your freakishly thin frame. You peered over stylish glasses which were perched authoritatively just so on the end of your upturned nose. The sharp manicure made your hands look like weapons, especially when you waved your finger at me. You’re a little like Zorro with those nails. Of course, you were at the ready, clipboard in hand, with a list of all the transgressions I’d made on my set: the atonal moment in the second A section of the third tune, the less than stellar scat solo on the up tempo swing and the fumbled lyric in the ballad. God forbid, who could forget the fumbled lyric? You shared a few more “observations” about my performance and even made a passing remark that my wardrobe selection for the gig was dubious. After stating your case, you stepped back, folded your arms and stared at me. I didn’t know how to respond. And here I’d been having so much fun until you showed up.

Mademoiselle Critic, you are the queen of the buzzkill.

You have been crashing creative parties for as long as I can remember. Although you’re never on the guest list, you have a habit of pushing your way through the door. The idea that anything could be created without you is unthinkable to you, so you barge in, flailing your arms around and making a scene. You’re like a fussy bully. You kick the legs out from underneath ideas, sometimes before they are even fully formed. You have a way of extinguishing inspiration, even though you argue vehemently that you’re only trying to help. It’s even worse when you bring your mean girlfriends along: Madam Fashionista, Mrs. You’re Doing It All Wrong, The Duchess of How Dare You Eat That and Princess It’s Just Not Good Enough. You pull up a café table in my psyche and collectively laugh and point at me. Damn you women are tedious.

Why do I put up with this?

Mademoiselle Critic, I’m not even sure where you came from. Maybe you’re a long lost relative from my family of origin. I do know that you’ve been hanging around for years. Oddly enough, even though you annoy the hell out of me, I really do think you’re trying to help. It’s just that you’re really bad at it. I know, I know; you don’t want me to look stupid or to mess up or to go onstage wearing that. Your intention seems to be to contain me for some reason. Perhaps your thinking is that if you can just keep me in line, I’ll be safer out there. But the truth of the matter, Mademoiselle Critic, is that however well intentioned you may be, you’re not helping. I need room to breathe. The more expansive I am, the more creative I am. And the more creative I am, the stronger I am. I need you to back off so I can do my thing. I can’t shoot off bottle rockets if you keep stealing my punk, dig?

I know you’re looking over my shoulder as I write this. You’re squirming in your pants. You’re not liking the flow of this post and you want nothing more than to blurt out your dissatisfaction. I’d like you to trust me for once. I’ve got this covered. I know we have a lengthy history with each other and that keeping your mouth shut is going to be difficult for you. But you have to try. If a swatch of duct tape would help, I’ll gladly provide it. You see, I’m almost 50 years old and I just don’t hang with people who talk to me like you do. You’re going to have to figure out a different way to be with me, Mademoiselle Critic. I’m tired of your shrill banter. I don’t want you to poke me in the ribs anymore. If you try to kill my buzz again, I’ll swat your hand. Tough love, I know. But it’s either you or me, lady. As mom used to say, “If you can’t say something nice, don’t say it at all.” Mademoiselle Critic, consider that your new mantra.

So how about you? What does your critic look like? If you were to write him/her a letter, what would you say? The comments are now open! 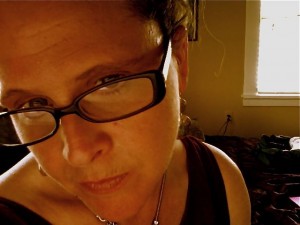