Our Creative Lives: The Vegetarian & the Roast Beef Sandwich 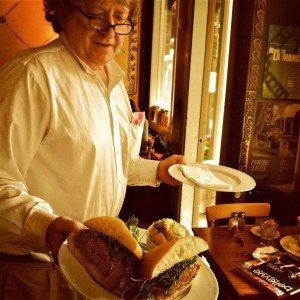 It’s actually the “Caribbean Seasoned Roast Beef Torta Sandwich”– a monster of a feed with a whopping 10 ounces of beef on a ginormous bun, topped with a garden of cilantro and enough jalapeño peppers to kick you from here to Texas and back. It’s the ultimate gastronomic bliss-out for meat eaters.

And oh yeah, I’m a vegetarian of over 20 years now. Did I ever think I’d be writing about a roast beef sandwich on my blog? Er, no. So why am I doing it now? Read on.

The Caribbean Seasoned Roast Beef Torta Sandwich is the creation of Steve Gilbert, who is the proprietor of “Gilbert’s On Main,” a popping little deli on Main St. in Old Bellevue. (To the uninitiated, that’s Bellevue, WA.)  I was recently introduced to Steve by a fellow vocalist– Neal Golden. The other day, the three of us met up at the deli to have lunch and to discuss some potential writing work for the business. Neal and Steve are old friends and being in their presence was a bit of a beguiling romp. The two share a love of movies and, from time to time, would break into a quirky interplay of pinging movie lines back and forth at each other. I watched in amused awe. At one point, they got into an entertaining quibble over “The Philadelphia Story,” which has apparently been an ongoing source of conflict in their long friendship. It was hilarious. That alone made the drive across I-90 well worth it.

The conversation quickly turned to the Caribbean Seasoned Roast Beef Torta Sandwich, which was just rolled out this week. Steve launched into a lively and detailed description of the sandwich and brought out individual ingredients for me to have a gander at. He eventually took me back to the kitchen so that I could witness firsthand the assembly of this showstopper of a sandwich. The beef is simmered every so briefly in a special au jus and is then piled on an Essential Bakery roll the size of a small flying saucer. The addition of the cilantro and the peppers completes the masterpiece. With each step, Steve became increasingly more excited. It was impossible to feel anything but happy for this sweet man and his new creation.

We brought the sandwich back out into the restaurant so that we could take a few photos of it. There was a fair amount of fussing around involved. We worked to position the sandwich just so, as to optimize the lighting and overall composition of the shot. Mind you, I’m not a professional photographer and I was merely taking pictures from an i-Phone. (Neal was shooting from an i-Pad.) Still, we were on a mission to get a great shot of this sandwich and our goings-on attracted the attention of several customers. In the course of 20 minutes or so, Steve sold two of the sandwiches at $17.99 a pop.  OK, so that may be a hefty price for a roast beef sandwich, or actually any sandwich. But before you sputter and gasp, consider that there are much stupider things to spend that amount of money on and we’ve all done it at one time or another. And in the spirit of journalistic balance, I should note that there are much cheaper items on the Gilbert’s menu. This sandwich is simply a tour-de-force of sorts; a culinary experience of the highest order, at least from what I can tell from my non-carnivorous perch.

We photographed a lot of dishes that day, including a particularly beautiful lox and bagel plate and also the Greek omelet that I had for lunch.  I took a picture of my lemonade–complete with a paper umbrella–and blasted it out to Twitter and Facebook via Instagram. When this quirky little snapshot received a few “likes,” Neal and Steve were over the moon with contagious enthusiasm. The next thing I knew, we were staging shots. My favorite involved a couple of long, cool glasses of ice tea, a trumpet and a straw hat, which were all strategically placed on an outdoor café table. We fussed and played and snapped from all angles. We even moved the table to better catch the geraniums in the background. Before I knew it, I was wearing the straw hat, snapping away with abandon and thoroughly enjoying the company of my charming companions. 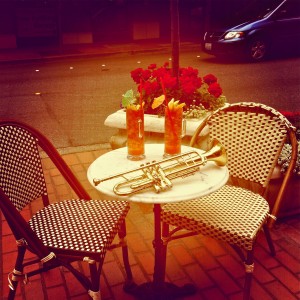 The curious fun continued. We ended up in Steve’s cramped office behind the kitchen, watching You Tube clips from “Diners, Drive-Ins & Dives,” a Food Network series and one of Steve’s favorite shows.  Steve explained that although the title might suggest otherwise, the food featured on the show holds its own special kind of artistic merit. Steve spoke glowingly about some infamous onion rings that were featured on one of the episodes. He explained in detail how they were dipped in batter and refrigerated multiple times before being deep-fried. Apparently, the end result is an onion ring of supreme, drool-worthy caliber, so delicious that your eyes roll back in your head with just one bite. The common themes running through the episodes are authenticity and intention. Steve shared with me that the show was part of the inspiration for creating the Caribbean Seasoned Roast Beef Torta Sandwich.

So, we’re back to the question of why I’m writing about a roast beef sandwich, especially given that I’m a vegetarian and will never even entertain the thought of taking one bite. And what does any of this have to do with the creative life? Here it is: It’s not really about the Caribbean Seasoned Roast Beef Torta Sandwich. It’s about the passion behind it. What I learned from my afternoon with Steve Gilbert and his friend Neal is that passion can take many forms. It’s not limited to sweeping symphonies, elegantly painted landscapes or deep poetry. It can be the perfectly humming engine or the expertly coiffed poodle. In the case of Steve Gilbert, passion is creating wonderful and interesting food and sharing it with his customers. Passion exists in the most unlikely of nooks and crannies. 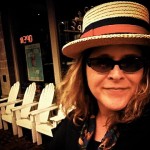 Other people’s passion can spark something in the rest of us. It ignites ideas, invigorates optimism and allows us to experience joy from a completely different angle. If we’re willing to take the ride, an open-minded foray into someone else’s rapture can inform our own creative process. It is cool to consider that our creative lives are one big ecosystem of inspiration, energy and connection. The potential in that feels huge.

OTHER PEOPLE’S PASSION IS INFECTIOUS.

Yours can be too.

2 responses to “Our Creative Lives: The Vegetarian & the Roast Beef Sandwich”