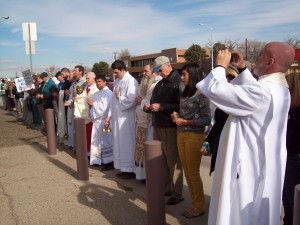 I can’t think of anything that would be more annoying than showing up for work in the morning and finding a bunch of priests conducting a vigil on the sidewalk in front of my place of employment. Equally annoying (and ridiculous) would be the sizable crowd of women, men and children holding horrific signs that accuse my co-workers and me of murder. Even more irritating would be the stress and worry that such an ugly crowd would cause my customers. Welcome to Martha’s world.

Martha is my marvelous big sister. She is also the V.P. of Public Affairs and Director of Security for Planned Parenthood of New Mexico. Every year during Lent, the anti-choice group 40 Days for Life stages daily protests in front of the PPNM surgical clinic and administrative offices. The atmosphere for these 40 days is circus-like: long processions of people walking past the building, militant anti-choice activists waving around giant posters with graphic images, little old ladies fingering rosaries, protesters blocking the entrance to the parking lot and scads of religious sorts kneeling in prayer. Each day, a different church from the Albuquerque area represents on behalf of the 40 Days movement. In years past, most of these have been from Catholic parishes, although this year, many are from evangelical Christian congregations. While protesters are part of the day-to-day for someone working for Planned Parenthood, the 40 Days picketers are the weekend warriors of protestors. Their annual showing is akin to amateur hour and they are particularly inept and obnoxious. For example, they park in the Planned Parenthood parking lot. When informed that they are trespassing and have to move their vehicles, they then ask Planned Parenthood staff for suggestions as to where they could park, after calling said staff “killers.” Just this week, a 40 Day protestor wandered into the Planned Parenthood administrative office and asked an employee where he was suppose to meet his fellow protestors. Insert facepalm here.

Rather than organize a counter protest, which would not be productive and could potentially create more headaches, the smart women of PPNM have turned this 40-day debacle into an annual fundraiser called “Pledge a Picket.”  Supporters can either donate a set figure or can pledge an amount per protestor on Good Friday, when picketers easily number into the hundreds. Whenever someone makes a donation, a brightly colored ribbon with his/her name on it is tied to the fence in front of the Planned Parenthood buildings. (Those who make their donation in person have their picture taken and posted on the PPNM Facebook page.) By the end of the 40 days, this fence is covered in ribbons. This not only serves as a visible symbol of the support for PPNM but also raises a lot of money for the organization and helps offset the closure of the medical clinic on Good Friday, when the sheer volume of protesters makes if difficult for patients to come and go from the facility. “Pledge a Picket” is an intelligent response to an outrageous situation.

While recent events such as the Congressional attempt to cut funds to Planned Parenthood, the bogus Stearns investigation and the Susan G. Komen fiasco have certainly garnered a great deal of attention, it should be noted that regional affiliates, like Planned Parenthood of New Mexico, are in the trenches every single day, fighting off similar attacks on the local level and tenaciously advocating for women’s health. At any given time, these affiliates are battling everything from funding cuts and parental consent laws to bills that would limit women’s access to affordable birth control.  Sadly, many of these affiliates are woefully underfunded. This is why drives like “Pledge a Picket” are so very important.

Contrary to how the 40 Days for Life contingency would like to characterize her, my sister Martha is not a killer. In fact, she is one of the most compassionate people I know. She’s a mother, a wife, a cancer survivor, an animal lover and the best friend a sister could have. Martha has worked in the reproductive rights field for almost three decades and has been with Planned Parenthood for over 12 years. She cares deeply about women and their access to quality, affordable health care. Over the years, I’ve watched her work tirelessly in a political environment that is challenging, frustrating and, at times, potentially dangerous. Sometimes I worry about her. But every single day, I am proud of her; I’m proud of what she does and what she represents. I am proud to be her sister. I would like nothing more than to get in the face of each and every protester that harasses my sister and her co-workers, but I know that this ultimately would not be helpful.

That’s why I am planning to Pledge a Picket.  I very much hope you’ll join me.

To learn how you can “Pledge a Picket,” go here: http://www.plannedparenthood.org/new-mexico/events-13992.htm

Also, hop over to the Planned Parenthood of New Mexico’s Facebook page & thank Martha and the gang for a job well done: https://www.facebook.com/ppnewmex 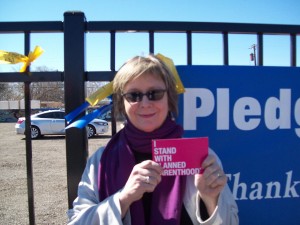