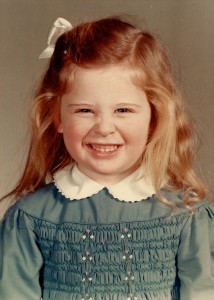 My mom did not get me.

The showdown started early. Mom wanted a baby doll of a little girl whom she could adorn in frilly dresses and patent leather Mary Janes. She dreamt of kempt hair with cute ribbons. What she got, however, was chubby, messy me. I was my own little animal with a bit of a feral streak. I had no use for the corduroy jumpers and matching tights that she perpetually tried to inflict on me. I preferred baseball caps, flannel shirts and baggy jeans. She was dismayed by my husky body–forever cajoling me to lose a few pounds– and was not fond of the dusty old Jodhpur boots that I wore everywhere. School picture day was always a battle over which image would mark whatever grade I was in at the time. More often than not, Mom won. But while she could dress me up in all the bows and petticoats she wanted, I would never succumb to her ladylike dictates.

I was a Rebel Soul.

Rebel Souls do not readily comply with someone else’s idea of who we should be. We challenge the status quo. We question assumptions about what “normal” is and who gets to define it. Being a Rebel Soul is not necessarily an act of willfulness. It’s more a tenacious insistence on authenticity.

Unencumbered by the burden of caring about what other people think, Rebel Souls tend to have more fun in the world. We don’t follow pre-approved scripts or behave in accordance to cultural precepts. This comes with a measure of risk. Going up against societal conventions can generate significant smack back. I can testify to that firsthand. My flagrant defiance, trespassing and irreverence have cost me at times. But for a Rebel Soul, the potential for gain is worth any bruises incurred along the way.

As Rebel Souls, we are forever being told that there’s something wrong with us. In my case, I was always too much of something–fat, loud, disheveled– or not enough–feminine, fashionable, intellectual, etc. This can be painful and lonely. But a Rebel Soul is a courageous spirit and quickly learns the high art of not giving a shit. And this is why a Rebel Soul always wins. We are indefatigable. We are fighting for something very fundamental: the freedom to be ourselves.

A few weeks ago, my band and I performed at a local wine bar. It was a wonderful night: We sounded good, we kept things swinging and the audience had fun. After the show, a woman approached me and told me how much she enjoyed the music and how much she liked my singing and stage presence. And then came the “but.” She went on to say that while I am a great singer, I don’t look “like a jazz singer should” and that I needed some kind of style. (This is not the first time I’ve been given this feedback. Some believe that my fashion deficiencies are an impediment to my jazz career. I often wonder if this is a problem for my male colleagues.) But as she was making her remarks, my mind didn’t go to my clothes or my hair. Instead, I started thinking about a coda I’d messed up in one of the tunes and it bugged me. I have my own standards to worry about. Not anybody else’s.

We live in uncertain times. The paradigms that many of us were brought up to believe in–about education, work, career, stability and so on–have fallen by the wayside. Security is dubious. If we make it to old age, many of us will have no way to pay for it. The white picket fence is a mere relic from an outdated narrative. But Rebel Souls are accustomed to operating outside of the archetypes. It’s what we do. There’s not a lot for us to lose because we never bought into the story in the first place. If anyone has a shot at thriving in this weary world, it’s a Rebel Soul.

I’ve been beaten up out there and soundly defeated many times. I’ve experienced deep heartaches and have failed often. I’ve also made my share of messes. When measuring success, I probably don’t meet the typical metrics. But I don’t really think in terms of success. I think in terms of durability. Grit is a core value.  And I can tell you this much: No person or situation has ever broken me.

Being a Rebel Soul is an act of survival.