Seahawk Football: Crazy at the Clink 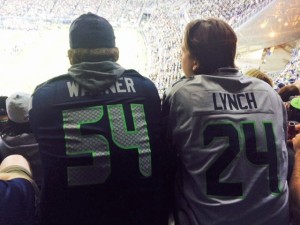 Thanks to the generosity of my awesome pal Alma, I had the good fortune of seeing the Seahawks play the Detroit Lions on Monday night at the Clink.  Although I had been to a preseason game before, this was my first time to attend a regular season game and to witness the 12’s in all their mad glory. If there were three words –off the top of my head– to describe the evening, they would be these: decibels, beer and testosterone.

First things first, the Hawks won the game. But it wasn’t pretty. Given it was the Lions and that we were at home, it was disappointing to see the Hawks struggle to the extent that they did, with fumbles, sacks, blowing a ten point lead and almost losing all together save the eleventh hour bad assery of Kam Chancellor. As one sports writer said, Seattle’s offensive line “brings new meaning to the word ‘offensive.’ ” I don’t think anyone in Seattle would dispute that characterization. The o-line is certainly freaking me out. My grandma could have offered up better pass protection. Still, a win is a win, and sloppy play aside, it was a rollicking good time at the Clink.

It was a beautiful evening for football, and the Clink, with its gorgeous view of Elliott Bay and the Olympic Mountains is a world-class facility all around. Throw in the 12’s, and it’s a bona fide freak show of epic proportion.  On game days, the entire area within a 2-3 mile radius of the stadium is a deluge of Seahawk fans. It’s a trippy circus. Imagine Halloween, but in blue and green. A random sampling of the crowd could easily include:

It goes without saying that the whole scene is ridiculously LOUD, with people yelling, the drum line banging, heavy metal pumping, announcements blaring and general revelry. Being that I’m a loud woman, I felt completely in my element. I could talk loudly, shuffle along loudly and do pretty much anything I wanted loudly without some asshole calling me out for it. Rock the fuck on!

Alma and I met up at Occidental Park and slowly made our way through the masses, stopping briefly at a food truck to grab an affordable bite before entering the stadium. We eventually took the lengthy hike up the twist of ramps towards our section. Alma stopped to grab a beer, and I went on to find our seats. When I arrived at what would be my seat, I was slightly taken aback by the dude that I would be sitting next to for the next few hours. He was huge – easily 300 pounds or more – and had a bright blue beard, obviously dyed for the occasion. Big fella took up every inch of his seat and cascaded over into mine. If you’ve been to the Clink, you know that they’ve crammed thousands of very tiny seats extremely close together, much like the coach section in a Boeing jet.  When I saw this beast of a man, I was a little concerned that it was going to be a long, uncomfortable night. Before anyone slams me for body shaming, it was an issue of physics for me, not hate. We were awkwardly close for the duration of the night, but became quick compadres before the first quarter was even over, high-fiving, seat-dancing and fully simpatico.

My small hometown in Oklahoma had a population of roughly 30,000 when I was growing up. The Clink holds around 70,000 people and there were 69,005 in attendance Monday night. We were smack in the middle of what was basically a city of Seahawks fans, and I believe the good people in our immediate vicinity were probably a fair representation of the greater herd.  It was way weird and it was fucking awesome. 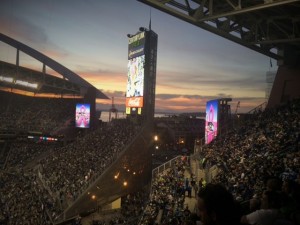 I’ve already mentioned the high-fiving, blue-bearded buddy to the right of me. Directly in front of us were two dudes in the throes of a classic bromance. All the elements were there: massive beer consumption, team jerseys, raucous commentary, indiscriminate yelling, enthusiastic man hugs and, especially as the night and alcohol went on, slurred expressions of undying love for the team, the city and each other.  They kindly shared the love. I returned their frequent fist bumps and even joined them in a little air guitar rock-out to “Enter Sandman” during a break. All told, it was a beautiful thing.

And then there was angry guy, who was sitting behind Alma. Every single time something went wrong, the dude popped a gasket. To say he was frustrated by the play would be a gross understatement. He was apoplectic, and seemed to take every fumble, botched drive and incomplete pass very personally. He ranted nonstop: “This o-line is fucking terrible!” “What the fuck, Wilson?” “God fucking dammit, we’re third and long again!” and so on and so on. He was so over-the-top that it was hilarious. Everyone around him was laughing, until they weren’t. By the fourth quarter, his unbridled rage and attendant color commentary got tedious.  Several people around him commenced to shooting him the stink eye and shaking their heads. About midway through the fourth quarter, I noticed his girlfriend up in his face a bit and then, lo and behold, he went silent. Peace was restored in section 304. I knew I might be writing this and had to somehow get a picture of angry guy to augment the post. I asked Alma to pretend to take a selfie but actually get the shot of him. I initially told her I’d crop her out of the photo, but her expression is just too priceless to omit. Angry guy is on the right; arms folded, irritated sneer, blue jersey. I’m cracking up as a type this. Angry guy should be locked in a small stuffy cell in a Turkish prison, naked with Phil Simms and Cris Collinsworth. That would give him something to bitch about. 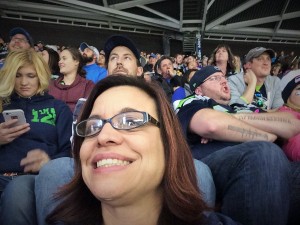 Of course, the 12’s are notorious for bringing the noise, which we most certainly did on Monday. Whenever the Lions had the football, it was basically deafening in the Clink. I did remember the volume from the preseason game I went to. But on Monday night, these were decibels on steroids. It was borderline on painful. There were a few minutes that I considered that I might actually be damaging my hearing–not such a great idea for a vocalist–but I quickly dismissed the notion and joined the roar. Losing my voice at a football game is also a pretty dumb thing to do. But what can I say?  I was operating at a reptilian level, and it was a blast.

The crowd at the Clink was unbridled, hyperactive, obnoxious (at times) and maybe even a touch Neanderthal. The whole scene is a little like a modern version of damnatio ad bestias and the Roman Coliseum. Some may find the vibe disconcerting, but not me. Football makes me happy on a visceral level. I love my fellow fans. They’re weird. They’re scary. They’re insane. They represent. And the Hawks won! I’m not sure what more a woman could ask for. If I ever win the lottery, I’ll buy season tickets and paint myself blue. Until then, I’ll just float in the afterglow of a rippin’ great evening.

Now, let’s say it together……