Seahawks and the Buddha 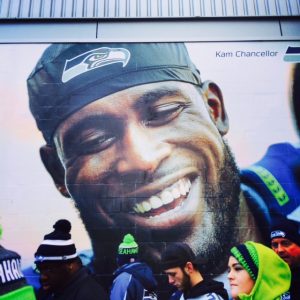 I’ve spent the past week or so shuffling around aimlessly, discombobulated and adrift since the Seahawks’ season ending lost to the Arizona Cardinals on New Year’s Eve. My beloved and mighty Seahawks did not make the playoffs this year. The last time they missed the playoffs was 2011. It’s a hard truth to square with. As such, it’s taken me a little time to snap out of my gloomy disappointment and organize my thoughts for this post.

It was a tough season. It didn’t help that it culminated in a loss at home against the Cardinals and their coach Bruce Arians, the puffy, red-faced poster child for disagreeable temperament. I’ve been listening to sports radio nonstop. There is relentless speculation as to what exactly went wrong: injuries, an underperforming offensive line, massive penalties, questionable coaching and a sad kicker who just couldn’t get the job done. Attendant with the question of why things went so badly is the equally pressing question of “now what?” For this post anyway, I’ll leave the analyses to people more qualified to make them. Still, my fan blues linger. And I know I’m not alone. One scroll through Twitter is apt reminder. Many a 12 is crestfallen. It’s hard to see our team struggle so, especially when we’ve taken the ultimate ride with them. We’ve soared to stratospheric greatness and tasted the sweetest, head-spinning high. And even though that particular zenith is a few years removed, it actively lingers in our psyche. We believe that diamond is still within our reach.  Falling so terribly short is such cruel pain.  But alas, before I succumb to such dreary depths of spirit, I’m reminded that there is comfort available. It comes in the form of my old friend the Buddha and the lessons he left behind for us.

I’ve been a follower of Buddhism most of my adult life. I started out as a bit of a dilettante, exploring bits and pieces of the philosophy as it suited me, but embraced it more fully after a personal tragedy some 25 years ago. Buddhism was the only thing that made sense of human suffering. And over time, it has continued to help me navigate the day-to-day of this crazy world and the challenges it presents. It stands to reason then that Buddhism could also be useful in helping a fan deal with the disappointing end to their favorite team’s season. Two particular tenets come to mind: impermanence and non-attachment.

Impermanence, or anicca, is a fundamental law of nature. Everything changes all the time. Winter snows melt into cold spring streams. Fat, wiggly puppies grow into big dogs with enormous paws. Pothole ridden roads are smoothed over with fresh asphalt. Seniors graduate. Buildings weather. Seeds turn into flowers. Everything changes. So why should a football team be any different?  We can’t expect players to perform at such a high physical level without it eventually compromising their bodies. Impact, injuries and time eventually have their way. Players that terrorize and dominate eventually fade. There is only so much a man can ask of his body. The NFL itself, with trades, free agency, the constant movement of players and coaches, is a hallmark of change. Things don’t stay the same. Teams look different year to year. Things change.  It’s our resistance to this which leads to unhappiness. I should note, however, that the laws of impermanence can often work in our favor. An example: injuries heal.

Another helpful tidbit from the Buddha is the practice of non-attachment. Attachment creates a lot of misery in the world. We want people, places, things and situations to look, be or remain a certain way. Consciously or unconsciously, we dig into this particular desire and fixate on a very specific narrative or outcome. When things don’t roll out as we want, we suffer. We wanted for the Seahawks to have a winning season, to go all the way again. It’s reasonable to think they could have–the talent was certainly there. God knows, we’d love to taste that glory another time. But when we leave no psychic space for other outcomes…when nothing else will do…once again, we suffer. When the Hawks lost Super Bowl 49, things felt impossibly bleak. I was crushed. I felt gutted. I ruminated constantly, speculating on a thousand “what ifs.”  But I was creating my own misery, adding layer after layer of grief to an already difficult situation.  If you think of it, expecting your team to win the Super Bowl every year is like expecting every day to be your birthday. It’s a little silly really. Non-attachment is simply acceptance of things the way they are. Seasons the way they are. Teams the way they are. As for as the Seahawks specifically, I might note that things could be a lot worse. We could all be Browns fans.

The past few days have been lighter. As I remember the laws of impermanence and let go of the expectations I had for this season, space opens up for other things. I’ve become curious and a little excited about the off-season and all of the changes it’s sure to bring. Which players will remain on the team and which will move on? What will the draft look like? How will they address some of the problems of this season? I’ve also refocused on the ongoing effort to elevate my football I.Q.  The other night, I watched five hours of coach’s film with a couple of friends, one of whom is a true football expert. I learned a ton and had a blast hanging out with two people who love the sport (and the Seahawks) as much as I do. I’ve also been watching all the playoff games. Of course, it’s a drag the Hawks aren’t in contention. But I’m enjoying the games anyway. It all boils down to my fundamental philosophy that any football is better than no football.

I’ll wrap this post up with one final thought: love. I suppose love isn’t exactly part of the vocabulary of football, but for a fan, it’s really what it’s all about. Disappointment and frustration are part of what we sign up for. Loving a team is a lot like loving another person. If that love is unconditional and true, then it endures, through the joy and the triumph, as well as the wrenching bruise of defeat. As the Buddha said, “In the end, only three things matter: how much you loved, how gently you lived and how gracefully you let go of things not meant for you.”