Seattle Seahawks: A City in Love 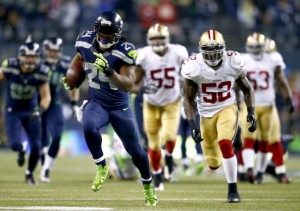 Of course, Seattle football fans are in an ecstatic frenzy over the Seahawks defeat of the San Francisco 49ers in yesterday’s slugfest for the NFC Championship. The game was a classic nail biter down to the final seconds. Colin Kaepernick blasted a last effort pass to Michael Crabtree, only to have Richard Sherman tip the ball into the hands of Michael Smith for the interception that would nail the win and send the Seahawks to the Super Bowl. The city exploded and the 12th Man went joyfully berserk. We jumped up and down. We grabbed each other. Our heads spun around. We completely lost our shit in a delirious bliss-out. I’m still waiting for my heart rate to go down.

Even before yesterday’s big win, there has been a charge pulsing through the city. As the team has marched steadily through a winning season and on to the playoffs, we’ve developed a renewed sense of community. With each game, our collective joy has grown. We’ve become a city of fans, donning team jerseys, hats and t-shirts. We’ve started making eye contact, chatting it up in line in the grocery store and waving at each other in traffic. We are interacting with people whom we might not have ever connected with before. The mere notice of a Seahawk logo is enough to elicit a smile or a knowing nod from a stranger. We have been gushing in beautiful camaraderie. And we just can’t help it. As my friend Cara said, “It was like aliens landed and dumped love on our heads.”

I’ve never really experienced anything quite like this. It’s been a whole lot of fun but it’s also been quite heartening.  Economically speaking, it’s hard out there and a lot of people are still struggling. But the Seahawks’ grind-it-out trajectory to greatness has given an unexpected respite of sorts. No matter how difficult our individual circumstances may be, we can still come together and be part of something bigger. When Marshawn Lynch goes Beast Mode and ploughs through a wall of linebackers to run it into the end zone, it gives even the most downtrodden cynic something to believe in. I am not suggesting that football is the solution to all of our problems, individually or otherwise. But it can inspire a common enthusiasm and maybe even optimism. And right now you can feel that when you walk through the streets of Seattle.

There have certainly been naysayers along the way. There are people who don’t like football and simply don’t get what all the fervor is about. Fair enough. But I am perplexed by the vitriol of some of the non-fans. The Seattle Weekly recently ran an essay written by Paige Richmond, who rambled on about tolerating sports and her disdain for football and professional athletes in general. In her view, a love of sports is in conflict with liberal values. The whole piece felt bitter and sanctimonious. I think this woman should take some Ex-Lax, or at least get off her high horse. I’m not into needlepoint but I don’t take a morally superior attitude towards people who are. But as they say, “haters gonna hate.”  She appears to be outnumbered anyway. Happily, most non-fans aren’t as uptight. Many are delighted to have shopping malls, health clubs and grocery stores to themselves on game days. Some have even told me that while they’re not into football, they do hope the Seahawks win. In Buddhism, they call this “sympathetic joy.”

I grew up in Oklahoma. Football is like a religion there. During Dallas Cowboy games, my mother would sit in her rocking chair, knit furiously and yell at the television set. I went to the University of Oklahoma for two years and had a front row seat to Barry Switzer’s rough and tumble run with the Sooners. Although I’ve dabbled in other spectator sports over the years– ice hockey, in particular–football runs in my blood. I come by it naturally. I’ve been following the Seahawks for a few years now and this past season has been an especially thrilling ride. I watch the games with the same group of friends every week. We’re in it together through every tackle, pick-six, fumble and touchdown. For the first time since my divorce six years ago, I finally feel like I belong to a tribe again. It’s not just about wins, losses or stats. That said, I’m out-of-my mind excited for the Seahawks/Broncos matchup in the Super Bowl.

So we’re in this happy dream together. Last night, we were screaming through the streets, celebrating the NFC Championship. Today, we’re still floating. I couldn’t be prouder of my team or more impressed with their grit, determination and hard work. Their success on the field has been phenomenal but the magic they’ve brought to this city is nothing short of extraordinary. As we count down the days to the Super Bowl, the resounding mantra of the faithful continues: “Go Hawks.”

There was much panty bunching last night over Richard Sherman’s post-game rant about Michael Crabtree. Anyone who regularly reads this blog knows that I’m a big fan of Mr. Sherman, so it should come as no surprise that I am speaking out in his defense. It was a highly charged moment and Erin Andrews stuck a microphone in his face mere minutes after the game. Richard Sherman did what he always does– he told it like it is. No bullshit. No dilution. It’s one of the things I admire about him. In subsequent interviews and in a blog post today, he explained the context for his remarks. This has not stopped the barrage of criticism, outrage and nasty (and in some instances, racist) commentary thrown his way via social media. The good news is that he can take it. He’s a bad ass, after all (and the best lockdown cornerback in the NFL). The irony is that one Seahawk gets fined for not saying enough to the media, yet another is bashed for saying too much. You can’t have it both ways, people.

“I was never more hated than when I tried to be honest. Or when, even as just now I’ve tried to articulate what I felt to be the truth. No one was satisfied.” –Ralph Ellison 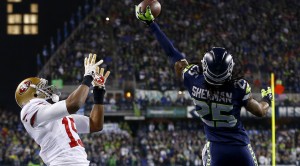 One response to “Seattle Seahawks: A City in Love”