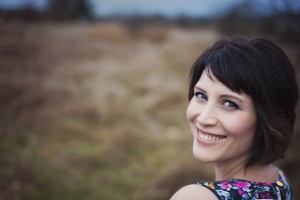 The setting is Shuga Jazz Bistro. The occasion is a special jam session celebrating the birthday of Seattle pianist Eric Verlinde. Jennifer Kienzle has stepped up to the mic. I’m always struck by her cool finesse and sophisticated ease. She exudes a classic jazz singer aura, all the way down to the little black dress, which she rocks hard I might add. But beneath this impeccable elegance is an underlying sassiness, with a nip of growl. Within a measure or two, she’s bringing down the house with her own purring version of “Sweet Georgia Brown,” delivering the goods and then some. She kills it all the way down to the very last note, and everyone in the joint is awestruck and happy.

Growing up in Germany, Jennifer’s earliest exposure to music was more along the lines of American pop than the American Songbook. Her introduction to jazz came when her boyfriend at the time, an avid music aficionado, gave her a Sarah Vaughan recording. “Jazz came to me,” she recalls, “I was not looking for it.” But she was immediately hooked. She started listening to other vocalists, such as Anita O’ Day. Soon, Jennifer was singing herself and knew right away that this was what she wanted to do. “It felt natural. It felt good,” she says. She began taking workshops and was particularly inspired by one led by vocalist Melva Houston, who encouraged her to continue. She started hanging out at jams, met a lot of musicians and sang with a variety of jazz groups to “get her chops going”.

Upon her arrival on the Seattle jazz scene in 2009, Jennifer made the rounds of the local jam sessions and continued to develop her voice. Her first gig was at the now defunct Lakeside Bistro, a small restaurant that was known for featuring area jazz vocalists. She has since become a much admired member of the Seattle music community and gigs steadily around the city. Jennifer’s approach is all about connecting with her musicians and having fun on the bandstand. “A lot of it is about personality and good humor,” she explains, “I hire musicians I’d like to hang out with.” This sensibility has served Jennifer well, as she’s forged strong relationships with a multitude of the region’s top-tier players, including Dawn Clement, Tim Kennedy, Jeff Johnson and Eric Verlinde. She frequently performs with the lively 200 Trio, a spirited ensemble of former Berklee students Cole Schuster, Greg Feingold and Max Holmberg. Because of the band members’ shared background, the ensemble is particularly tight. “They have synergy,” she says, “I love their enthusiasm.” Jennifer also had an ongoing gig as vocalist with the Easy Street Band, a 9-piece group that performs big band charts. When she’s not gigging, Jennifer is still out and about on the scene, often with camera in hand, taking photos of her jazz brethren. She is a loyal regular at the infamous Tuesday night jam at the Owl & Thistle, which she refers to as “my home session.” 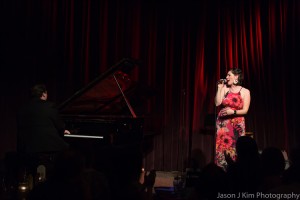 In 2014, Jennifer was the winner of the Kobe Jazz Queen competition, an annual event that sends one Seattle jazz vocalist to Kobe, Japan as part of a cultural exchange. The win took her completely by surprise. She was standing in the hallway at Jazz Alley, purse in hand, ready to head out after the winner was announced. She was shocked when her name was called. She quickly tossed her purse to Verlinde, who had accompanied her that night, and headed up to the stage.  “It’s surreal,” she chuckles, “They start taking your picture and asking you questions.” Jennifer traveled to Kobe in May of that year and represented Seattle at two different performances. In September, she served as an informal hostess when her Kobe counterpart, vocalist Rie Takahashi, came to town, taking her to various jams and introducing her to the community.

Jennifer and I sat down to lunch the other day and had a chat about all things music. One thing that is immediately clear is that this woman is fully devoted to her craft. Whether pouring over a book of Cole Porter lyrics, listening to Betty Carter recordings or studying with her teacher Denny Goodhew, Jennifer always has an ear open for new ideas and for ways to expand her sound. We talked about the wealth of vocal talent in the region. A few nights earlier at the Verlinde birthday jam, we’d witnessed Seattle soul siren Josephine Howell perform a stunningly beautiful rendition of Leonard Cohen’s “Hallelujah.” We were both inspired and humbled. We were also motivated to keep doing our thing. Jennifer feels blessed to be part of such a vibrant community: “It’s easy to connect. It’s a warm and inclusive environment. There is no ‘Seattle freeze” in this community.”

Jennifer’s next performance is June 11th at Vito’s, where she’ll be playing with Dawn Clement on piano, Michael Glynn on bass and Max Holmberg on drums. After that, she is off to Germany to visit family and to perform. On June 24th, she’ll be appearing at Jazzhaus Heidelberg with guitarist Christian Eckert and bassist Johannes Schaedlich.

For more information about Jennifer, please visit her website:  http://jenniferkienzle.com.