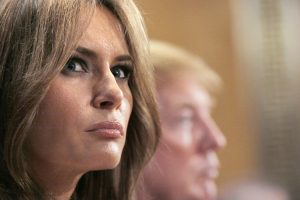 Dear Melania Trump, Elaine Chao, Janna Ryan and other Wives of the GOP,

Although we reside on different planets in separate universes, I’m writing this as a fellow human sister and with the faith that you are fundamentally good women.  I’m confident that somewhere in the sacred depths of your beautiful hearts, you know with complete certainty that something is terribly wrong. While you may not be in a position to express your gnawing trepidation out loud, I suspect that you understand, without question, we’re in trouble. As your men rise to power, I am hopeful that your influence may guide their decision- making and ultimately save this great country.

You are aware that your men are wreaking havoc out there. The new administration isn’t even in office just yet, but the movement– led by your men– is already in full motion. They’ve attempted to expedite the confirmation process for the president-elect’s cabinet, bypassing standard financial disclosures and FBI background checks. (And yes, Ms. Chao, I get that this particular one may cause you to shift uneasily in your seat.) They’ve launched their dark mission to repeal the Affordable Care Act, including the defunding of Planned Parenthood, a vital health care resource for millions of your sisters. Stubbornly refusing to believe the scientific facts of climate change, they’ll soon move forward with gutting the Clean Power Plan, withdrawing from the Paris agreement and dismantling a host of other environmental regulations. Disturbing questions about Russia and Putin linger. And then there’s that God-forsaken wall. Should I go on?

The picture is indeed grim. However, you ladies–wives and intimates of some of the most dangerous men in the world–have a unique opportunity to alter the somber tide. As such, I am asking you to do your sisters a solid and to take the ultimate stand:

As you know, “Lysistrata” is a play by Aristophanes in which the women of Greece, led by the mighty feminist hero Lysistrata, withhold sexual relations from their men in order to influence an end to the Peloponnesian War. I implore you, Ms. Trump. Ms. Chao, Ms. Ryan and other Wives of the GOP, to please execute a modern-day version of this ancient tale. Reason, it seems, has no efficacy with your men. And morality has taken a backseat to a lust for power. You know this. You can see it on their faces when you sit across from them at the dinner table. They’re determined to carry out a catastrophic agenda that will create great suffering in this country and beyond. In the absence of reason, we are forced to resort to their most basic sensibilities. You hold the key to getting their attention and changing their reckless behavior. It’s so brilliantly simple: refuse the nasty until they stop their mad crusade.  Although they are men of significant influence, you have the ultimate power to bring them to their knees and save us all.

While money and privilege may protect you from some of the consequences of your spouses’ actions, you are not invulnerable. You may be able to buffer your families from the fiscal hardships that are sure to be generated by this movement, but you’re not immune to the laws of physics and nature. The depletion of the o-zone, for example, will impact everyone, whether they live in a ghetto or a mansion. Many of you are mothers.  I urge you to think about the future of your children, grandchildren and great-grandchildren. The policies of your spouses will have far-reaching ramifications that could one day cause great adversity for people you love. You may feel impervious now, but life can turn inexplicably. Advantage is a fragile veil.

But if compassion or fear don’t inspire you to take the ultimate action, maybe practical considerations will. Let’s face it, ladies. Sex with those guys has got to be pretty awful. Couldn’t you use a break? Let’s start with you, Melania. I can only imagine how distasteful it must be to have him climbing on top of you with his lumbering girth, menacing pinkie dick and overactive fish lips. The sweat, the flesh….oh girl. (Of course, consent, sadly, may not even be a factor in your case.) Intimacies with Mr. McConnell surely involve the most odious of olfactory affronts: gas, halitosis and unidentified old man smells. I’m so sorry, Elaine.  As for Mr. Ryan, I envision mommy fantasies and a diaper fetish. You deserve better, Janny.  All of you deserve better. And in withholding for the cause, you not only have the opportunity to alter the course of history but also to reclaim your bodies, dignity and sanity. Sit with that for a moment. Visualize. Kind of like a tropical paradise, huh?

Whether you can admit it or not, I have to believe that all of you are on bewildering rides that you never could have imagined for yourselves. Circumstances, peculiar choices and the unwieldy nature of fate have brought you to this place. But I believe that while your life situations are what they are, your souls remain intact. You are decent, thoughtful women.  With heart as your guide, you know explicitly what is right and what is true. Men who seek to violate the very sanctity of humanity hardly deserve to taste the sweetest of life’s nectar.