The Curious Relativity of Time 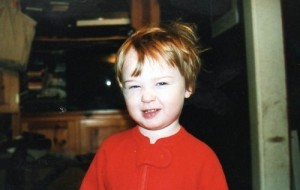 Enzo was originally due on Halloween. However, potentially serious complications came up and the wise decision was made to deliver him early via C-section. Fifteen years ago today, I was getting ready for my trip to the hospital. Bags were packed. My older son Emmett was set to spend the night with friends. My husband Charlie was off from work. My best friend Lisa was driving up from Portland. At that time, I didn’t know the gender of the baby that I was about to deliver. I only knew that his or her lungs were ready for life outside the womb, as determined by an amniocentesis earlier that morning. Charlie and I shared a nervous excitement. The complications were disconcerting, but we knew the early deliver was the right decision. At approximately 6:40pm on October 3, 1997, Enzo made his safe arrival to the world.

Enzo was the crabbiest baby in the history of humanity. He screamed, for no apparent reason, for the first 6-7 months of his life. Charlie and I were beside ourselves. Our friends brought covered dishes and looked on in horror and pity. It was grueling. But eventually, Enzo worked out whatever he needed to work out and bloomed into a happy and adorable baby– all smiles, flowers and rainbows. He’s still blooming now.

The birthday of a teenager always seems to inspire a look backwards to those early years of motherhood, or as I like to call it, parenting boot camp. The physical demands were relentless. The mental ones were even more so. I so remember long afternoons with a napless toddler, who had been a sleepless toddler the night before. I can still see the pots and pans scattered about the kitchen floor and Enzo grinning and drooling as he banged on them with a wooden spoon. To this day, my lower back holds the muscle memory of the 500,000 times I got a little kid in or out of a car seat. I remember hours and hours of Hot Wheels and Duplos, countless bowls of macaroni and cheese and epic tantrums in the grocery store. I remember changing barf-drenched sheets only to have a sick three-year-old throw up all over again, mere minutes later, on the fresh sheets. I remember the endless Raffi tunes and how I seriously considered throwing that particular CD out the window on the way to a pumpkin patch one afternoon. I remember how Enzo’s hair smelled right after a bath and what a cute little manatee he was in his swimming goggles. I remember being exhausted, in love and out of my mind most of the time.

As hard as they were, there was a certain sweetness to those early years of parenting. In retrospect, our family was floating in a kind of idyllic innocence. Things were much simpler then and more hopeful. Although some of those days felt very long at the time, oh what I would give to revisit them.

But flashing back to the present, I’m dealing with teenagers now. Our lives are very different and the game has changed up considerably. I’ve gone from boot camp to special- forces. Teenagers are radically self-sufficient and disinclined to while away the afternoon with mom. They’re moody. (Think toddlers in grown-up bodies.) And all of the sudden, I’m not as smart as I used to be. In fact, I’m pretty much an embarrassment most days. Sometimes this leg of the parenting journey is unbearably lonely. But I can’t help but wonder if someday I might look back on these days and remember how hard yet lovely they were, just as I’m looking back on the early years now.

Today is Enzo’s 15th birthday.  A few weeks ago, he started his freshman year at a brand new high school. He’s making tons of friends and has recently signed up for debate club. (As if I need my teenage son to hone his debating skills.) Enzo was recently an extra in the film project of one of his friends. He got to play a zombie. He’s adjusting to the homework demands of his new teachers and is managing his own academic affairs. This morning, Enzo asked me to buy party hats and cupcakes for him to take to school. There’s still a bit of a kid in there somewhere. After I dropped him off today, I was gripped with the realization that in just three short years, he will be an adult, at least by the legal definition. While it’s true that I’ve already passed this milestone with Emmett, I anticipate this turn of the wheel will be particularly poignant with Enzo, my baby. For now, however, life is to be lived.

Many of my friends are brand new parents, just buckling up for the big wild ride. I see their posts on Facebook about snotty noses, poopy diapers and kids that won’t sleep. I have no nuggets of wisdom to pass along. The longer I parent, the less I know. But I can share this one thing:

IT ALL GOES VERY FAST. 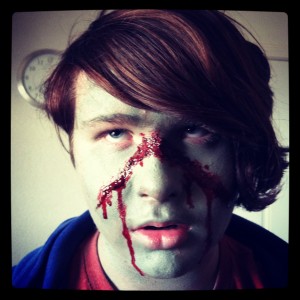 One response to “The Curious Relativity of Time”