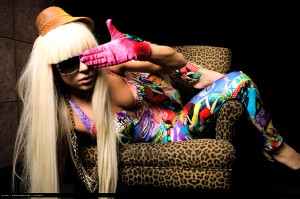 My 13 year-old son is gaga over Lady Gaga.

Sadly, this has caused some divisiveness within the family.

I guess Enzo started getting into Lady Gaga last fall. I noticed her coming up on his i-Pod on the mornings I drove the carpool to his school. At the time, my feelings about Lady Gaga were pretty benign. She was simply just another pop icon, far-removed from my own musical landscape. Until Enzo started playing her in the car, I probably couldn’t have identified even one of her tunes. Even when I became more familiar with her music, my feelings towards Lady Gaga were still neutral. She seemed like quirky but harmless fun to me.

The whole Gaga conflict ramped up around Halloween. Enzo was in a fashion design class at school and was given an extra credit assignment of making his own Halloween costume. He decided to replicate the red lace dress, hat and veil that Lady Gaga wore at the 2009 VMA’s. This was no small task. It required thought, research and a fair amount of red lace. It also required a whole lot of thick skin on Enzo’s part. At his dad’s house, Enzo’s choice for a Halloween costume was met with disapproval from both his dad and his older brother Emmett. Their objections were twofold; they were of the strong opinion that Lady Gaga is nothing more than a pop brand and that her music holds no merit. They also did not like the idea of Enzo basically dressing in drag on Halloween. Although his dad did help him with some of the trickier sewing on the project, Enzo still got an earful every time the subject of Lady Gaga came up. There was no ambiguity with those two; Lady Gaga was an embarrassment all around. At my house, the vibe was very different. With a power snap and a big hug, I encouraged Enzo to do whatever the hell he wanted and voiced my opinion that if anyone took issue with his choice, it was his/her problem but not Enzo’s.  But my encouragement was around Enzo’s choice to dress as Lady Gaga for Halloween. I still didn’t really know much about her music.

So I did what I thought was reasonable. I started listening.

To their credit, Enzo’s dad and brother are both talented musicians. They’re both great guitarists with a deep understanding of music. Emmett’s musical tastes are intelligent and sophisticated well beyond his 17 years. If there’s snobbery to their musical sensibilities, I get it. They object to corporately created “brands” that are passed off as real musicians and fed to the masses. Their aesthetic demands authenticity and true artistry both in the mastery of the craft and the depth of the message. I can’t necessarily argue with that. As for me, I share their sensibility, at least to a point. However, the lines and definitions just aren’t as clear-cut to me. One shuffle through my i-Pod reflects pretty eclectic tastes: Carmen McRae, Rancid, Ray Charles, Shawn Colvin, John Coltrane, The Who, Keith Jarrett, Pat Metheny and Bill Charlap, who, incidentally, put on a stunning performance at Jazz Alley a few weeks ago. These are just a few. The question is: How does Lady Gaga factor in?

For starters, I maintain my earlier premise that Lady Gaga is harmless fun. She seems to borrow quite a bit from Madonna’s playbook of outrageous bravado and “hey, look at me” publicity antics. Where she departs from Madonna is that she doesn’t seem to take herself quite as seriously and she also seems to have an odd proclivity for the grotesque. (What was up with her shoulders at the Grammy awards last week?) But beneath all the theatrics, there does seem to be something compelling going on in the music itself: mainly, the message that it’s OK to be different and to celebrate who you are without apology. This takes me right back to my kid and why Lady Gaga might have such an appeal for him. He’s his own unique person, smack in the trenches of that special hell known as middle school where there is enormous pressure to be anything but “different.”  When I think back to when I was his age, music was everything. It was a lifesaver. One tune could make all the difference in my ability to survive a lousy day, a hard week or a confusing social situation. I don’t know if this is what Lady Gaga does for Enzo. He’s never said as such. But I can see that her music makes him happy and because of this, I am unwilling to dismiss her.

When I was in college, I used to have this ongoing discussion with my housemate, who was a graduate student in English. He maintained that if a novel had widespread appeal or if, God forbid, it was a bestseller, then that immediately made it void of any artistic merit. I suppose some would say the same is true in music. But I struggle with absolutes like that. Taste in music is a complex proposition. In my experience, I gravitate towards different music for different situations and moods. For example, I love Miles Davis, but when it comes to running, he’s not my first choice for what I want to listen to while I’m huffing and puffing on the treadmill. Or to use another example, I am pretty wild for Esperanza Spaulding; she has a depth, a vision and a crazy mastery that I think could very well define the future of jazz. But my appreciation of her doesn’t diminish the fun I have listening to, say, the Ramones. Of course, I’m not saying that I love everything I hear. (I would rather endure another root canal than he forced to listen to anything by Kenny G.) What I’m saying is that not every musical experience has to be profound or intellectually brilliant. As people, we are more multifarious than that. We are blazing geniuses. We are also bobbleheads that simply dig a good groove now and then.

As for Lady Gaga, I can say this: I like her.

The tune that won me over to Lady Gaga was “Monster,” which is a simple tale of a girl hooking up with the wrong guy. The message is about how we sometimes jump into situations even though certain people are flat out bad for us. One lyric grabbed me: “He ate my heart and then he ate my brain.” God, I’ve been there. Haven’t we all?

Maybe what it ultimately boiled down to for me was a parenting thing more than a musical one. Lady Gaga brings a lot of happiness and fun into my kid’s life. In the simplest of terms, a friend of Enzo’s is a friend of mine. When it comes to music, there is an infinite universe to be explored and certainly much wonder to be shared. If I am closed or critical of what my kid listens to, then the conversation stops immediately. Our potential to influence each other goes away. We lose a simple but immeasurable joy. I’m just not willing to go there. If the Lady Gaga conundrum has taught me anything, it is that open ears equate to open minds. That’s what parenting is all about. That’s what music is all about.