The Guys in the Band 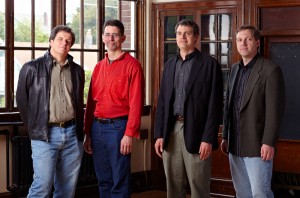 In my humble opinion, the best friends a vocalist can have are the musicians in his or her band. This has been my experience anyway. Throughout the years that I have been on this jolly trip, I have been blessed to work with high-caliber musicians, who are not only at the top of their game in terms of mastery and creativity, but who are also inspiring and kindhearted human beings. These musicians are the patient and generous spirits that taught me about the music, answered my questions, shared their wisdom and helped me grow as a vocalist. I learn from them every time I step on to the bandstand. Four of those musicians are featured on “As the Fates Decide” and yet another will be playing at the release party at Tula’s tomorrow night. On the eve of the release, it seems fitting that I should take a few moments to pay homage to these fine gentlemen.

If there was any one driving force behind this project, it was Randy. Sometime in the spring of 2009, I started making some chatter about recording a new demo CD. Randy smiled quietly and suggested that maybe I set my sights on something bigger for myself. In his opinion, I had already recorded a demo and to do another one would be a sideways maneuver. I think I didn’t believe him. A few weeks rolled by, and the subject came up again. Randy reiterated his position. Over the course of the next couple of months, we would discuss the possibility many times. I typically had a lot of reasons as to why I wasn’t ready. Randy consistently challenged my resistance.  He seemed unmoved by my doubts, which were really just chicken shit fears. Before I knew it, the language slowly changed from if I was going to do a CD to when I was going to do it. I believe the subtle shift in semantics came from Randy. He slipped it in when I wasn’t paying attention. Before I knew it, we had scheduled dates at David Lange’s studio, and the game was on.

Randy worked tirelessly on this project. In the years that we’d been working together prior to jumping into this recording, we enjoyed playing around with odd time signatures and different grooves; this made for some interesting romps and in some cases, some great discoveries. Randy crafted amazing arrangements for this CD, many of which incorporate the rhythmic playfulness that we share and love so much. In addition to arrangements, Randy produced the project. He answered questions, directed traffic, injected humor and perspective as needed and basically helped me get through this without freaking out. On top of everything else, he played his ass off on the recording. I cannot thank him enough for his enormous contribution. I am blessed beyond belief.

Doug and I met a few years ago. We had a regular gig together at the Tutta Bella in Wallingford. Doug was a Seattle jazz veteran and had played in numerous impressive groups such as New Stories and Big Neighborhood. Because of this, I was slightly intimidated going into my first gig with Doug. That was completely ridiculous. He couldn’t have been a warmer or more supportive person. As our gigs together continued, I became more and more taken by Doug’s ability to anchor the time and also to create deliciously hip grooves. When I was singing with Doug, he always made a really rich and fertile playing environment, which provided lots of cool ideas to feed from. Doug was also a great teacher for me. I asked him lots and lots of questions, and he was always willing to oblige my curiosity.  Doug was very supportive during the recording of “As the Fates Decide.” He did a beautiful job on this CD, and his arco work, in particular, is just breathtaking. Doug is a phenomenal bassist and a good friend. He has recently moved to California. I miss him a lot and hope to play with him again someday in the future.

Steve was one of the first drummers I worked with when I started singing jazz. I think I met him when I was in a vocal workshop led by my teacher Greta Matassa. Steve was encouraging and enthusiastic from the get go. We started working together and also became good friends. Steve could best be described as true blue; he’s seen me at my personal worst, he knows my shortcomings well and he still cares for me anyway. He’s one of the most generous people I know. In addition to being a top cat jazz drummer, Steve is a photographer, a stunningly good one. He did all the photos for the CD and also the ones in the photo section of this blog. (He took the above photo of the band.) When my dog Audrey was dying of cancer, Steve and I took her to a park on Mercer Island, where Steve captured sweet images from one of her last good days. I am forever grateful for these beautiful photographs. In addition to playing and taking photos, Steve organizes the University of Washington Jazz Camp every summer and  thanks to him, area high school jazzers get to workshop with some of the best musicians around. Of course, Steve played impeccably on this recording. As a drummer, he’s as steady as it gets. His solo on “Get Out of Town” is perhaps one of my favorite spots on the CD.  Steve is the best. His star shines brightly.

Chris is one of those guys that I had heard of and knew about for years before finally meeting him. Our first gigs together were a few summers ago, when we had a regular duo gig at this funny little joint in Snohomish, where we literally had to climb a ladder to get to the bandstand. In addition to the ladder factor, there was the issue of the PA; basically, I had to bring one. This was one kooky gig, and to this day, I’m not sure why Chris took it more than once. But Chris was always good-humored and never complained as we passed equipment up the ladder to each other on those hot summer nights. (We also once had a kind of funny wedding gig together on the 4th of July. While the couple was exchanging vows, holiday revelers were shooting off bottle rockets and Roman candles on the beach just below the ceremony. It was kind of a “Love American Style” situation.) Chris is a lot of fun to perform with and he did a bang-up job on this CD. I love playing with Chris and hope that we get many more gigs together in the future, even weird ones. 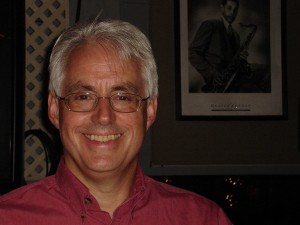 Although he is not on the recording, Clipper Anderson will be doing bass duty for the CD release. Clipper is a lot like Steve in that he is one of the first jazz musicians that I met and played with. In addition to workshops and gigs with Clipper, I’ve attended many a vocal jam at Tula’s with Clipper on the bandstand. Clipper’s genius is undisputed. He’s one of those guys that seem to be able to do anything. I think he has the most beautiful tone I’ve ever heard, and his improvising knocks my socks off. I could sit and listen to Clipper for hours and be completely blissed out. Clipper is a terrific friend, a cheerful and positive influence and a good teacher. He’s got a great sense of humor and he has an almost encyclopedic knowledge of old tunes and television shows. Any gig with Clipper is a good gig, and I’m thrilled and grateful that he will be playing at the CD release.

So these are the gentlemen of the band. I am always more interested in what we can come up with together as opposed to just what I’m doing as the singer. On any gig, it is really important to me that the musicians on the bandstand feel free to play whatever the hell they want to play. I am interested in what they do. I trust them completely. If left to play what they feel, these musicians will come up with nothing short of magic and they will certainly elevate the game for everyone, especially me. It was extremely important to me that Randy, Doug, Steve and Chris had a sense of ownership with this project and that their voices were heard equally alongside mine. I am honored to have made this recording with these fine musicians and friends. “As the Fates Decide” belongs to them as much as it does to me.

2 responses to “The Guys in the Band”