The Incentive of Eddie Lacy 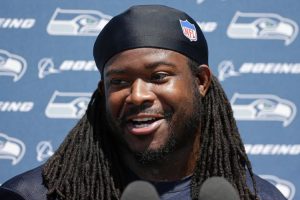 Let me begin by saying that I like running back Eddie Lacy and I’m glad that he’s come on board with the Seahawks. To the uninitiated, Eddie is a former Green Bay Packer. He played four seasons with the team, going to the Pro Bowl his rookie year. He was also named the 2013 Rookie of the Year. If you’re reading this Eddie, welcome to Seattle and ahoy!

Eddie signed a one-year contract with the Hawks, worth $5.5 million dollars, with around a $3 million dollar guarantee. As part of the deal, Eddie also gets an incentive bonus for keeping his weight below 255 pounds. Apparently it was around 267 when he came to Seattle for one of his free agent meetings. I’m not entirely sure how it works, but on May 15, he received $55K for weighing in at 253, below the targeted 255. He received another $55K yesterday, June 12, for again coming in below 255.   He’ll receive the same in August if he weighs in under 255. And for September through December, the monthly payout will continue if he can keep his weight below 245. That’s some righteous bank. And this doesn’t even include other incentives, like bonuses for rushing yards.  Yowza!

If you happen to be reading this, Eddie, I’m sending virtual high-fives your way. Congratulations! Losing weight is hard enough. And I sure as hell wouldn’t want my weight to be the topic of national discussion, especially if the exact figure were announced.  You’re one brave dude. Mad respect.

I could definitely stand to drop a few pounds-let’s just say something in the neighborhood of 25. Like most people trying to lose weight, I struggle. Although I’m a disciplined regular at the gym, I’m perpetually seduced by sugar and have occasional episodes of emotional eating. Nothing eases a bad day like a bowl of Ben & Jerry’s FroYo. That said, if someone were to give me a $55K incentive, I’m pretty sure I could get over my sugar addiction and quick. $55K would help out a lot right now. While I obviously can’t claim to be a starving artist – I just copped to packing an extra 25 after all – I am a chick with bills to pay. Expenses are perpetually neck and neck with income if you can dig. For that amount of cash, I’d definitely lose the weight, even if I had to wire my mouth shut to do it. And for the cool $365K–those seven glorious payments of $55K– I’d be willing to announce my weight publicly. I’d also take a “before” photo of myself in a swimsuit and post it on the Internet. Unfortunately, I’ve got no takers for this, at least not to my knowledge.  Of course, for the same amount of cash, I’d be just as happy to keep my weight under 255, like Eddie. Just sayin.’

While I was doing my research for this post, I discovered that Eddie has a Twitter account and a measure of notoriety for his Tweets about food. I LOVE THIS GUY!  And he’s on Instagram too!

SIDEBAR: I’m giving serious thought to starting a separate blog for football and the Seahawks. As you regulars here know, I’ve been trying to get a paid gig writing human interest stories about Seahawk players, fandom and football in general for a long time now. So far, my efforts haven’t been successful. (There is a very thin line between bold optimism and straight-up delusion.) As such, if nobody wants to hire me to write about football, then maybe I should just start my own thing. What do you think, folks? Could you get behind that? Would you read and share my posts? And just in case you’re seeing this now, Eddie, can I interview you?

Losing weight is hard. Earning large amounts of money is hard. Our man Eddie Lacy is rockin’ both. I believe they call that winning. Hell to the yes, Eddie. You’re an inspiration to us all. And GO HAWKS! 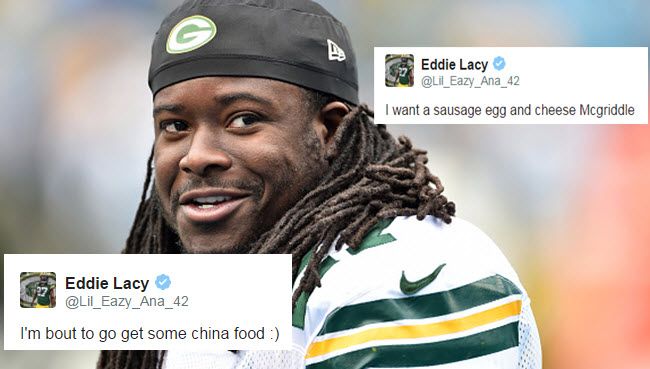 One response to “The Incentive of Eddie Lacy”