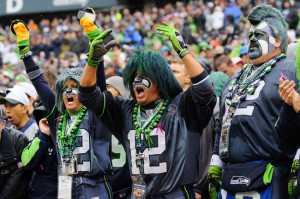 We’re midway through the regular football season. For fans, this is the apogee of our year. It’s better than the Fourth of July, New Year’s Eve, Santa Claus and a thousand birthdays rolled into one. Regardless of whether our team is winning or losing, we show up every week, fully-charged and ready to represent. ‘Tis the season, baby. However, to the non-fans out there, we are, at best, a puzzling curiosity and, at worst, an irritating nuisance. You look at us with amusement, indifference or sometimes, downright disgust. Mostly, I think you just don’t understand us. I am an official fan of the Seattle Seahawks and an earnest follower of the NFL. While I don’t presume to speak for all the football fans out there, I do think the following points can shed a little light on who we are, who we’re not and how we tick. In the spirit of peace, love and football, let’s jump in.

So that’s the lowdown. Football fans aren’t that different than anyone else. We put our trousers on one leg at a time. Our kids throw fits in the supermarket. We have library cards. We’re excitable but harmless. We’re not out to beat you up, or get your dog drunk or drive a monster truck with a 12th man flag across your front lawn. We’re not particularly stupid either. We’ve just got this mad love. And we’re never going to stop. You know that, right?