“We Can’t Get Angry at the Wind” 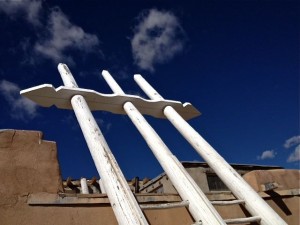 My sister Martha and I stood on the lip of what was surely heaven, mesmerized by the panoramic view. We were high on the sandstone cliffs of the Acoma Pueblo in New Mexico, looking out at mammoth rock formations, an endless blue sky and a vast pink mesa dotted with Pinon trees. The relentless wind filled the afternoon with dust. We were cold and our hair was in our faces. But we didn’t care.

Martha and I, along with our brother and his very soon-to-be new wife spent a magical day touring the pueblo, learning about its history and talking to the people who live there. The pueblo was established in 1200 and is the oldest continuously inhabited community in North America. There is no running water or electricity there. Most of the dwellings are well over 800 years old. A hole in the wall by the pueblo cemetery is to allow the spirits of the ancestors an entrance point for returning home. The vibe in the pueblo is both desolate and ethereal.

The Acoma people are kindhearted and decidedly hospitable. Many are artists and sell pottery and jewelry to people visiting the pueblo. Martha and I struck up a conversation with Gary, who was selling handmade prints in front of his home. He was an affable sort. He told us that his native name is “Waya’aistia” and that he had served in Vietnam. I asked him if the wind had ever knocked over any of the pots. He said he’d seen whole tables of pottery blown over and demolished by the high winds that often rip through the pueblo. But he added that, “We can’t get angry at the wind,” and said that if the wind breaks a piece of pottery, he is taking it to his home and leaving good luck in its place.

The Acoma history includes a dark period of horrific abuse at the hands of Spanish invaders and Catholic missionaries. As I listened to the stories, I was struck by the almost Buddha-like sensibility of this clan. In spite of the torture and violence that they were subjected to, the Acoma people endured with grace, dignity and an almost uncanny sense of non-attachment. Their faith was unwavering, as was their desire for peace. At points, they even attempted to assimilate some of the Christianity that was being forcibly imposed on them. (I might add that this willingness did not go both ways. The Catholic missionaries considered native traditions to be devil worshipping.) Ultimately, the Acoma people prevailed and their culture was preserved.  I stood on the sacred ground and saw it for myself. 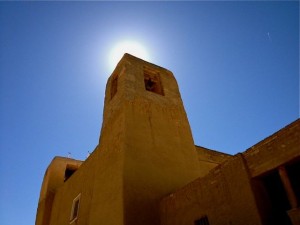 There is a lot going on with my family right now. Some of it–like my brother’s upcoming wedding–is quite joyful. Unfortunately, some is also painful and hard. But I’ve been thinking a lot about this idea that we “can’t get angry at the wind.” It reminds me of the flow of life and about things that are beyond our control. Sometimes all we can do is make a choice to be fluid, open and accept things as they are. We can battle or we can let go. I find an odd comfort in the notion that there could be something bigger, a greater momentum that I can neither understand nor affect.

When I was at the pueblo, I bought a turtle necklace made out of beads and mica, which is prevalent in the sandstone cliffs that the pueblo sits on. The turtle glimmers when light hits it. I’ve been wearing it every day since my trip there. It’s a small way to hold these amazing people close to me. Their strength reverberates through time. It gives me hope and a reason to have faith again. 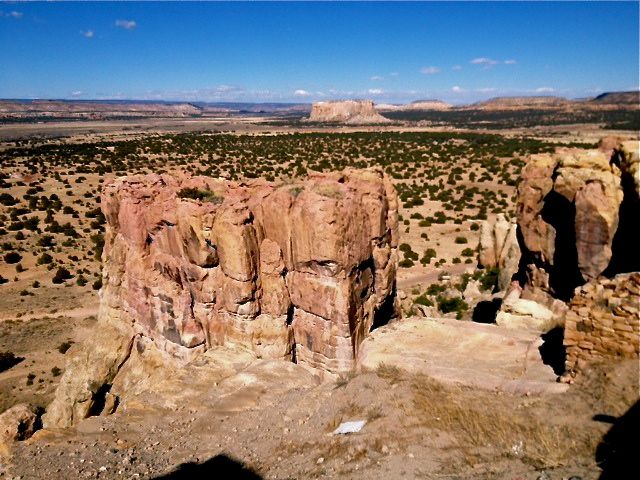