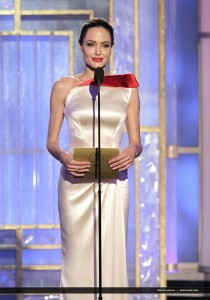 As is sometimes prone to happen here on the bloggie, I sat down this morning with the intention of writing about one thing, but another subject kept pulling for my attention. The muse is funny like that. When she says, “jump,” I say “how high?” Next week, I will indeed resume with a new post for “Our Creative Lives,” but for the present moment, the muse and I are marching down another path.

On Sunday night, I watched the Golden Globe Awards. From mutilation via plastic surgery to the freakishly thin, the images of women from that broadcast are still haunting me four days later. While I shouldn’t be surprised at such a gross distortion of female beauty, I am, nonetheless, disappointed all the same. The cultural mindfuck of American women perpetuates. And whether we like it or not, it runs deep.

Like most award shows, the Golden Globes started with the requisite red carpet entrances. Women in attendance paraded down the carpet to a chorus of oohs and aahs (and occasional “aaks”). Like trick ponies, they stopped on cue for the ceremonial twirl and then struck poses for the camera, strategically positioning their most favorable sides forward. As is always the case, the women of the Golden Globes were on display, judged first on beauty and couture. Accolades for professional achievement would come later. Whenever I look at photos taken on the red carpet, I am always struck by the ease or unease of the subjects. Although some seem to have the game mastered, many look visibly uncomfortable. Their faces seem to ask, “Do I cut it?”  The question that ran through my mind as I watched the red carpet spectacle on Sunday night was, “Is she actually going to be able to sit down in that dress?”

Judging from Sunday’s broadcast, it is unacceptable for women to be old or “fat,” with the definition of the latter to be anything over 100 or so pounds. This was evident by the plethora of negative-zero sized bodies and surgically altered faces. Particularly sobering were the mere skeletal remains of Angelina Jolie and the heartbreaking plastic mask that used to be the face of a very lovely Jessica Lange. The cameras were particularly fixated on Angelina, who, I might add, never once looked like she was having fun. Although there were countless images of women with bones showing and surgically altered faces, the ones of Angelina and Jessica linger most uncomfortably in my mind. Even the commercial breaks were troubling. One Calvin Klein ad featured a model so horrifically thin she looked like she could break. I couldn’t help but think of little girls who might have been watching and what they were thinking of these distorted images of women that they were seeing on their television sets. What is the message as to what is expected of them as women?

Even though this is 2012 and women have made phenomenal achievements over the past several decades, is it still the main cultural ideal for women to be beautiful and forever young? Exacting from the images that we are constantly bombarded with–in magazines, on television, at awards shows– this seems to be the expectation. But who or what is driving this, why does it perpetuate and, most of all, why do women continue to buy in? Is it just the continuation of the tired notion that women can somehow be contained? Perhaps the societal subtext is that as long as we’re busy counting calories and getting facelifts, then maybe we won’t make a ruckus about such things as economic justice, human rights and reproductive choice. 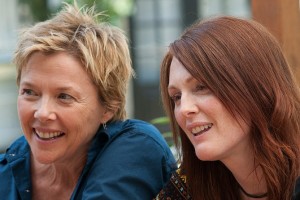 As I pointed out earlier, the mythology of what female beauty is “supposed” to be is deeply rooted in the minds of most women in our society. As loath as I am to admit it, I sometimes struggle with it myself. For example, for a day or two after watching the Golden Globes, I saw myself differently. I felt harshly critical of my physical appearance. I was either “too much” of “one thing” or “two little” of something else. A friend took an exquisitely sweet photo of me holding her baby and posted it on Facebook. When I first viewed it, all I could see were my wrinkles, the hopelessly broad shoulders that I inherited from my father and that pesky 15 pounds I keep meaning to lose. I consider myself a feminist and intellectually speaking, I most certainly know better than to minimalize myself (or any other woman) this way. But it’s still in there. It was ingrained in me as a child. As far as my mother was concerned, the worst thing imaginable was for a person, a woman, to be fat. It seems tax evasion, serial killing and crack dealing would all be preferable over the mortal sins of being overweight and “unladylike.” My saving grace was my father, who didn’t give a damn about anyone else’s approval. In my own psyche, his sensibility is the yin to her yang.  Although I have my occasional lapses, I am usually pretty comfortable in my own skin. Awareness helps; specifically, awareness of what is merely unsubstantial mental chatter leftover from years of unfortunate conditioning. Yoga also helps. For me, practicing yoga is amazingly empowering. And finally, defiance. I don’t have to buy into any mindset that would limit me, even if the cultural pull to do so is strong.

Refreshingly, there were some women at the Golden Globes ceremony who defied the trend and who proudly stepped out in healthy bodies and unaltered faces. Kate Winslet and Octavia Spencer come to mind. In fact, there are several women in the industry, such as Julianne Moore, Annette Bening, Lara Linney and again, Kate Winslet, who refuse to adhere to the pressure to modify their bodies and who staunchly define beauty on their own terms. These women are inspiring and, given their industry, quite courageous. If we are looking outside of ourselves for permission, then these ladies are worthy icons.

I know that I’m not writing about anything new here. But that’s precisely the problem. We live and breathe in a culture that, by and large, still values women based on a rigid standard of physical beauty. An epic shift is long overdue. But it seems that before we can create a widespread shift in our culture, we need to first make a shift in how we think about ourselves. Starting with our own minds and bodies, we can reflect on who we are, what we stand for and what beauty truly means to us individually. When we’re clear, we can move about the world with renewed freedom, intelligent resolve, graceful defiance and impeccable dignity. Ultimately, society will have no choice but to shift accordingly.

“There’s a big difference between ‘looking good’ and ‘beauty.’ Looking good is external. It’s just how you look. Beauty is internal.  It’s deeper. It’s who you are.”

Hopefully, this is more than just a disorganized brain dump. I was surprised at how difficult this post was to write. As always, I welcome your thoughts, insights and comments.