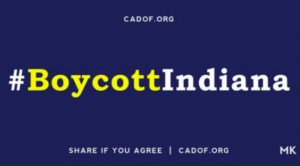 Like most normal people with feet and sensibilities firmly planted in the 21st century, I am appalled by Indiana’s odious pile of caca that is the Religious Freedom Restoration Act. While proponents claim that the law will prevent the government from infringing on the peoples’ ability to exercise religious beliefs, anyone with opposable thumbs and a functional cerebellum knows the more egregious implication: The RFRA opens the door for businesses and other entities to legally discriminate against LGBT people.

During Sunday’s airing of “The Week,” moderator George Stephanopoulos repeatedly asked Governor Mike Pence the following question: “If a florist in Indiana refuses to serve a gay couple at their wedding, is that legal now in Indiana?”  Each time, Pence refused to give a simple “yes” or “no” answer. He postured, squirmed and decried this legitimate line of questioning as “shameless rhetoric.” I would personally like to grab the governor by his lapels and slap him around a little. But indulging my baser instincts would not be productive. We’re trying to elevate the conversation here. So, I’ll use my words.

The RFRA says that the state cannot “substantially burden” someone’s ability to follow their religious beliefs unless there is “compelling government interest to do so.” I’m scratching my head here. No matter your religion, how could granting another human being his/her civil liberties or treating him/her with basic respect and dignity ever be considered a “substantial burden” or an impediment to practice? And what would define a “compelling government interest,” especially in a state that has no laws in place to protect against discrimination based on sexual orientation or gender identity?

If you are a proponent of this or other legislation of this nature, I have to wonder about intent. Do you really feel that your religious liberties are at risk, or is this about something else? For the life of me, I can’t understand why this law is necessary, unless it is a guise to obfuscate darker purposes. If your aim is to harm other people – to deny them basic civil rights because they are gay or bi or transgender– then I have to ask you, would God want this? Take a moment with this one. Dig deep. Step outside. Feel the sun on your face. Stretch out your arms. Let the breeze brush lightly across your body. Open your eyes to the blue skies and the cherry blossoms. Listen to the birds. Bask in the wonder. Absorb the sublime majesty of the universe. Take in all that you’ve been given and get square with you heart. All this around you–this creation–is God’s glory. Given this extraordinary gift of precious human life, do you really wish harm on your brothers and sisters? And yes, regardless of ethnicity, sexual orientation or gender identity, these are your brothers and sisters. Is hatred what God wants for you? Is it what you want for yourself?

And what about trusting God? Does your faith have room for the possibility that God, in all his/her/its wisdom, has this covered? Even if you truly believe that your LGBT brothers and sisters are sinful, then isn’t this God’s problem to handle? Even Jesus was a friend to prostitutes. He did not judge. Are you above the son of God? (And didn’t he die for all our sins anyway?)  Maybe instead of defending this crazy law, or refusing services to a gay person who patronizes your business or pointing a pious finger at those you deem as sinners, you should instead pray for God to remove your fear. Fear is the basis of all hatred. Your outward contempt is simply a reflection of the degree to which you are trembling inside. Only grace can save you.

The RFRA is harmful to the people of Indiana and their economic viability. The pushback against this unfortunate law has been significant. Numerous companies have scaled back or halted business ventures in the state. CEOs of several major corporations, such as Apple’s Tim Cook, have spoken out against the law. Conferences and conventions are being canceled. Mayors from two major U.S. cities – Seattle and San Francisco – have banned city-funded travel to the state. Connecticut Governor Dannel Malloy and Washington Governor Jay Inslee have followed suit. The hashtag #boycottindiana is emblazoned across social media. Even members of the Indiana business community have expressed outrage. As I write this, a handful of Indiana lawmakers are scrambling to write amendments to the law to “clarify” its purpose and intent. From this perch, it’s a classic exercise in covering their asses. But it’s a little like an insincere apology coming way too late. The only way they can make this right is to repeal the law and apologize to their LGBT constituents.

Arkansas is on the verge of enacting its own version of the RFRA, and 16 states across the country, including (sigh) my home state of Oklahoma, have similar laws on the books. It’s hard to get the mind around this. I can write a document, send and receives emails, download music, do research and basically conduct an entire day’s worth of business from my phone. So why do I feel like I’m living in the Dark Ages? Much of this is, no doubt, backlash against the widespread acceptance and legality of marriage equality. The spotlight is on Indiana now, but the issue is much greater. We are embroiled in a battle over the very soul of this country. It’s a matter of acceptance versus condemnation; inclusion versus exclusion, compassion versus cruelty; love verses hate. It’s a fundamental question of human decency and how we choose to define it. It’s an epic smackdown between faith and fear. And this brings me back to the very idea that if you know and trust God, then there is nothing to be afraid of and no reason for the RFRA. We should love our brothers and sisters. The Bible tells us so! In John 13:34, Jesus says, “A new commandment I give to you, that you love one another; as I have loved you, that you also to love one another.”