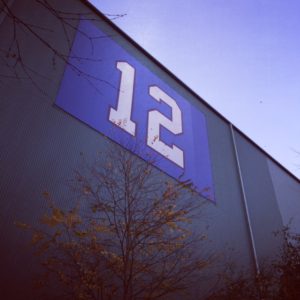 Over the course of the past year or so, I’ve become increasingly angry at how the NFL treats players who kneel during the national anthem and/or who speak out against police brutality and systemic racism. By NFL, I mean everyone from Roger Goodell and the franchise owners to a loud faction of the fan base that is predominately white, nationalist-leaning and, in some cases, overtly racist.  A few weeks ago, I wrote a blog post about my frustration. I was prompted to do so when the Seahawks canceled a planned meeting with Colin Kaepernick, supposedly because he wouldn’t disclose his plans for future activism, or more specifically, whether or not he’d be kneeling during the national anthem. I’m still disappointed by the Seahawk’s decision and frustrated by the NFL overall.

In April, I had the good fortune to attend a 3-day training with the Center for Equity and Inclusion.  We spent a good portion of our time looking at the history of white supremacy and systemic racism in the United States, the egregious damage these have caused generation after generation of people of color and how they continue to perpetuate today. It was powerful, painful and life changing. Since the training, I find that I’m looking at the world through a different lens, scrutinizing more carefully and with more awareness of the white power structure that I’ve benefited from. I’m far from woke, and this work will take a lifetime. But it’s inspired me to examine almost everything, including my support of the NFL.

The question now is: What am I going to do about it?

Many people, from friends to public figures, have opted for a personal boycott of the NFL. It’s something I’ve considered but have felt conflicted about. I question the efficacy. In some ways, boycotting feels like giving up and yielding to the entities that oppose player activism. And to be completely honest, if I’m giving up football, something I truly love, to make a stand, then it damn well better be meaningful. I get the selfish implications of that, but it’s a consideration all the same. Luckily, however, I believe I’ve found an alternative.

After much reflection and a few deep conversations with my good friend and fellow fan Nate Omdal, we’ve decided to form “12’s for Racial Justice and Equity.” Although we’re still working on a formal charter, our mission is simple: to organize Seahawk fans in support of player activism, on and off the field, and to bolster the cause of racial justice and equity. Our plan is to start simply by creating a group on Facebook. On the group page, we’ll post updates about players’ activist activities and articles on related issues. Also, for each week of the season, we’ll post one easy action item that any fan can do in support of racial justice and equity. Examples: Visit the “Dismantling Racism” website, make a donation to the “Seahawks Players Equality and Justice for All Fund” or follow Colin Kaepernick on Twitter. We’ll start here, but other possible ideas include organizing a meet-up, creating a fantasy league with proceeds going to charitable foundations and a book discussion group. We’re excited and energized. Although we’re starting small, the potential feels enormous.

We’re tired of players being vilified for speaking out on the life and death issues of racism and police brutality. We’re fed up with players being characterized as “anti-military” or “un-American” because they choose to kneel during the national anthem. We’re done with players being told to “shut up and play football” when they exercise their First Amendment rights. We’re here to serve as a bold unwavering counterpoint to the belligerent voices of the intolerant and hateful among the fan base. We believe in justice, accountability and equity for all. And we’re here to be heard.

The plan is to launch the first week of September when the 53 player rosters are finalized. Although we’re forming this group specifically for Seahawk fans, we welcome any fans from across the league who care about the cause. If we create something that resonates with others and inspires a bigger movement, so be it. In the interim, please stay tuned and get ready.

UPDATE (5/23/18) In light of today’s actions by the NFL, we are expediting the launch of this group and expect to do so within the next 1-2 days. Please check back here for more updates or find us on Facebook: “12’s for Racial Justice & Equity.”

“It takes a lot to put everything on the line: your livelihood, your morals, your community, everything. I suspect a lot of people think, from a distance, that it’s not that hard to do, like, ‘Oh, I’d be on the front lines. I’d sit. I’d raise a fist. I’d take a knee.’ But it’s so much easier to talk shit that to do shit, because once you are out there representing what you believe, people see the real you. Most everybody in the world wears a mask, and very rarely do people unveil who they really are. And I’ve done that. I’m naked here. So, I’m going to be judged by strangers on the core of who I am, and, yes, that makes me vulnerable and it can even feel terrifying. Nobody wants to lose his job like Kaepernick and risk becoming another former NFL player who ends up broke. But if the price of employment is silence…I just can’t do it anymore.”