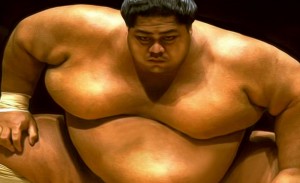 Chloe is a retired sumo wrestler who lives in my head.

I brought him on board about a year ago. Although he’d recently retired from professional wrestling, he was still looking for some action and I needed help. Chloe provides a security detail of sorts. I have these little thought bubbles that often evolve into full-blown characters. Once this happens, they create all kinds of trouble. Individually, they’re unhelpful misfits. But they tend to run together in an insidious group that I can the “Self-Talk Killers.” Chloe helps me keep them in check.

Chloe is gigantic and crushingly strong. I chose him for the gig because he’s wise, formidable and a little unconventional. He has the word “Free” tattooed across his back and he wears a little plastic barrette in his topknot. It’s shaped like a butterfly. When I asked him about it, he bemusedly told me, “Life is a process.” Despite his hefty girth and intimidating presence, Chloe is an easy-going sort. He walks around the place with a slight grin on his face. He seems to be amused a lot of the time. And yeah, Chloe is a man but has a name that is traditionally considered feminine. That’s just the way it is.

Chloe starts his day with me when I wake up and is usually shutting things down as I drift off to sleep each night. He’s cool like that. He says he’s securing my dream borders against interlopers. Throughout the course of his daily patrols, Chloe may deal with any number of Self-Talk Killers. They come in several varieties. But the following six are the main offenders:

This snooty chick runs the show in the psyches of too many good people, myself included sometimes. She’s sharp, pointy and relentless. She’s forever looking over my shoulder, chirping away about everything. She especially loves to sit next to me while I’m working at the computer or to sneak up on the bandstand. Nothing is up to snuff for this one. Mistakes are inexcusable. Humanity is a fatal flaw. She hangs out with other mean girls and is especially fond of Mademoiselle Critic. Chloe is pretty good at showing her the door, giving her a little shove if he has to. But she’s tenacious. She’ll leave for a while but she always comes back. Chloe calls her “the reoccurring pimple” but says that she’s great for job security.

Taskmaster follows me around, repeatedly tapping a pencil on a clipboard. He has a perpetual “to-do” list for me and thrives on a sense of urgency. He reasons that if I don’t stay on top of things, it will all go to hell.  He likes to “make me aware” that if I’m not writing, I’m not making money; if I’m not practicing, I’ll lose all credibility as a vocalist and won’t get any gigs; if I’m not exercising, I will gain 40 pounds today and so on. If I’m tired and just want to watch Netflix with the kid, Taskmaster starts in with the nagging. He gets this nasally whine thing going. He tugs on my sleeve and repeats himself over and over again, as if I didn’t hear him the first dozen times. Chloe deals with him by taking the clipboard away and placing his huge sumo paw over Taskmaster’s mouth.

She actually has a name. I think it’s Morgan or Becky or something like that. I call her “Hey Fat Ass” because that’s what she’s always yelling at me. She’s blonde, tiny and very skinny. She’s always chewing gum and running in place when she talks to me. She wears one of those God-awful personalized t-shirts like you get at the Kodak counter at the drug store. It has a picture of my mother and grandmother on the front. On the back it reads “Team Slim & Trim.” She flips me shit about my body. She tells me I’m too fat and gives me grief about stuff I eat. She scrutinizes my wardrobe choices. She thinks ice cream is just plain rude. Chloe seems to enjoy tangling with her. The discrepancy between their sizes is not lost on him and he finds it highly entertaining. He stands in front of her and just stares while she goes off. It’s like the sumo version of the Vulcan mind meld. If she persists, Chloe starts eating doughnuts and farting, not breaking his gaze for a second. Hey Fat Ass eventually walks off in a huff, thoroughly disgusted. The older I get, the less Hey Fat Ass comes around. But she’s a busy girl anyway. Sadly, she has many other women to harass.

Eeyore has been hanging out in my psyche for more years than I care to admit. As we all know, Eeyore sees the world through a gloomy lens. His fundamental belief is that everything is going to turn out badly. If there is a worst-case scenario to any situation, Eeyore likes to describe it to me in as much detail as possible. New things weigh heavily on his worn-out heart. The interesting thing about Eeyore is that he’s only vocal when he’s very, very tired. Chloe has a nice touch with Eeyore. He reminds him that rest and time can bring a better perspective and then gently leads him back to the forest so he can sleep.

GUILTY sits at the end of the bar and cries. Drunk on regret, she regurgitates story after story and relives every past mistake, fuckup and ill-conceived life choice ever made. Her lipstick is smeared and her hair is a mess. She wears old nylons with multiple runs. She eventually collapses in a heap, exhausted from the self-flagellation. Chloe picks her up and firmly drags her back to the present moment. “Don’t make me haul you back here again,” he warns, “Now wash your face and go do something useful.” It’s a tough love approach. And it’s quite effective.

Everything Sucks Dude is the surly teenager who complains…a lot: “This is stupid. That guy’s an asshole. Why do we have to do this? I hate this fucking place. This is taking forever. God, I wish she’d stop talking. That’s disgusting.” Everything Sucks Dude usually shows up in the middle of an ugly traffic jam or at the end of a long, weary day. Chloe doesn’t have a lot of patience for Everything Sucks Dude.  He wrestles him down quickly and sits on him until he shuts up.

Chloe describes his job as “kooky fun.” “It’s like clearing crack dealers out of the park,” he chuckles. I don’t know what I’d do without Chloe. He makes my brain tolerable.  As he cheerfully extricates the riff raff from the scene, it clears up space for possibility, wonder and good old-fashioned kindness. I feel like I can breathe again and refocus on whatever it is I’m here to do. It’s pretty liberating when a sumo wrestler has your back.

“Our own writing teaches us who we are.”

One response to “Chloe the Sumo Wrestler”