Creating in the Void 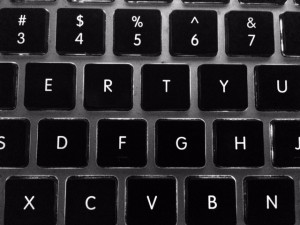 I recently came across a post by Jennifer Garam entitled “How to Keep Writing When No One Gives a Shit.” She begins the piece with an unflinching overview of the current state of her writing career: “…no publisher is wooing me with six figure advances…nothing I’ve written has gone viral…no one is compulsively refreshing my website, checking for my next blog post to be published.” She goes on to discuss other cruel metrics−sluggish web traffic, low engagement on social media, etc.− that seem to confirm that nobody is paying attention. She then asks the question, “So how do you not give up, when you’re working so hard doing something you care so deeply about, and it feels like no one else cares at all?” I have to applaud Ms. Garam for her honesty. It takes some guts to put the question out there.

And it’s certainly one I’ve often ruminated on myself.

As far as my professional writing goes, I see myself as a bit of a workhorse, focused mostly on press releases, artist bios, one sheets and whatever other promotional materials my customers need me to bang out. In this regard, the point is to attract attention for the people I’m writing about, not me. But my blog is an altogether different matter. That’s where the nitty gritty, soul stuff comes out. I absolutely want people to give a shit. And like Garam, I have my struggles around it.

The blog has been an interesting ride. I initially started out writing about the local music scene and my experiences as a jazz vocalist. In the eleven plus years I’ve been at it, my focus has wandered and I riff on a variety of topics. While deviating from a central theme is sometimes ill advised in the blogging world, I have to follow whatever is pulling me. In my mind, it’s all ultimately connected anyway.

To date, I’ve had one post go viral (Thank you, Richard Sherman), a few that have generated a fair amount of engagement and one that gets a handful of hits every single day. Interestingly, the posts that seem to get the most attention are the darker ones, like “To the Jumper,” about the time I inadvertently witnessed a suicide, and “The Scariest Post I’ve Ever Written,” a wide-open reflection on my long battle with depression. Go figure. But anyway, for all these exceptions, I’ve written countless posts that have maybe received 20 hits at best. Checking the analytics of these invisible offerings is like running your tongue over a canker sore. It hurts every time. It also leaves me wondering if I should keep at it.

And now I am daring the question a little more with the recent publication of my book “Weirdo Simpatico.” Right now, everything feels shiny and fun and promising. But I suppose that reviews, shares and ultimately sales will inform as to whether or not people give a shit. A promotional video and a spring reading series are in the works. For now, I’m choosing optimism.

I re-posted “How to Keep Writing When No One Gives a Shit” on my Facebook page. Judging from the comments, this conundrum is not limited to writers. Artists of all stripes−musicians, painters, actors, graphic designers− struggle with the question of relevance at one point or another. I feel it as a vocalist. I roll along, practice with diligence and play gigs whenever I can. But in the midst of a robust and lively scene, I do my thing in relative obscurity. I can’t say I have a following, I’ve never won an award and I’ve frequently endured the pain and stress of trying to get enough bodies in the seats to satisfy an anxious club owner. I’d be lying if I said this hasn’t sometimes created a nagging sense of doubt as to my capabilities as a singer. A low-hit blog post can create that same uneasy trepidation.

So why do we continue this? I believe Garam answers the question nicely: “But as bad as the rejection and all the non-caring feels, not writing feels worse.” Bingo. Sure, we all want our work to be seen and heard. We want people to feel us. But in the absence of this, the drive has to come from someplace deeper. For me, it’s almost inexplicable. I just know that the writing has always been there− the chubby kid writing short stories, the alcoholic college student fumbling her way through an extremely competitive English program, the exhausted mom stealing moments to scribble a line or two of poetry, the middle-aged writer-for hire just trying to survive−and it’s always been an reliable anchor when nothing else was certain. I want to be honest and brave in this world. I want to keep an open-heart. I want to have grit. If writing is the means for which I realize these ideals, then so be it. In this regard, it doesn’t matter if anyone is paying attention or not.

Garam’s post is thoughtful, compassionate and sage. It’s a good read for any creative. She closes it out by sharing that every now and then she gets an email from someone who has been positively impacted by something she has written. Often these people express that her words helped them “feel less alone” and “gave them hope when they were feeling hopeless.” I’ve had the same experience and am always deeply touched when someone reaches out to me in this way. And it never ceases to answer the question as to why to continue. One particular teenage girl comes to mind. If all I did here was to help her survive that one unbearable day, then it’s enough. Or as Garam so elegantly articulates it: “And despite what our culture would have us believe−that metrics and stats matter above all else, that the umber of clicks tells the whole story−somehow, in some calculation, impacting one human being has got to be worth more than all the unique page views and Shares and Likes in the world.”