Our Creative Lives: The Litter in the Void 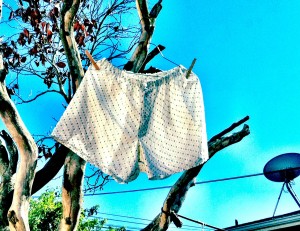 Friday evening. It’s sweltering out. My apartment is a sauna. I should be practicing but all I feel like doing is lying in front of the fan and watching Netflix. At the very least, I should be writing. Yeah, I know, I’m writing now. What I mean to say is that I should be writing something inspired.

But at present, this is all I’ve got:

She wanted to feel dizzy in his presence. She wanted explosions, shooting stars and hyperventilation. She craved the experience of heat rushing up her loin. She longed for the heave of bosom that she’d read about so often. She wanted to drip and tingle. But his vibration was like a dull thud. He was a kind man but with an imperceptible pulse. He was lukewarm and soggy. Nothing was going to change this. But if she couldn’t be in love with him completely, she hoped she could at least adore him in small doses. She wanted that much.

OK, I don’t even write fiction. And even if I did, it sure as hell would’t be this silly drivel. Yet this is what my mind is unleashing tonight. Where is this coming from? And why?

Inspiration is a little bitch. It shows up when it damn well feels like it. When it’s in the mood, it can rock your world like nothing else. But it can also hold out on you or disappear completely for long periods of time, leaving you in a state of angst and worry. It’s a little like a bad boyfriend that way. And when you find yourself in this void, doubt is more than happy to pull up a seat and keep you company. The void is a disconcerting place. You start to wonder if you’re losing your creative grip.

I carry around a small journal with me, so that I can write down any ideas that come bobbing up to the surface when I’m cruising through my days. A lot of the time, I forget about these little notes and stumble upon them later. Here’s a tidbit I came across this morning:

Note to self-pray in Spanish.

Huh? I don’t even pray. And if I did, why would I pray in Spanish? Would that somehow make it actually work? Por favor, Dios, dame un millón de dólares?

And then there was this:

Play Misty or I’ll whack ya.

This was inspired by an old guy I saw at Vito’s one night. He was rather rotund and was wearing a burgundy cummerbund. I think I was speculating as to what was running through his mind as he watched the jazz trio that was playing. Still, there was really nowhere to go with it. It was a transitory thought bubble, popped none too soon. But I scribbled it down all the same, like a crazy lady saving balled up wads of tissue in her pockets, just in case she’ll need them some day.

Sometimes a great idea is like a cat that won’t come out of a tree. In spite of my cajoling, it just swishes an indifferent tail and looks at me like I’m a moron. When the “creative flow” reduces to a mere dribble, all kinds of crazy shit comes crawling out from under the rocks in my head. The void becomes littered with odious metaphors, confused and incoherent narratives, random lines and dubious concepts.

But I sometimes wonder if bad ideas play an important role in our larger creative consciousness. Maybe for every achingly beautiful love song, for example, there are thousands of really awful ones, discards that never see the light of day. While they seemingly have no inherent value, perhaps they’re mulch for something greater. At the very least, maybe they contribute to some universal balance, the Yen and Yang of brilliance and wreckage. If this is the case, God knows I’ve done my part. An example from the vault:

Welcome to Infinite Ping! I’m so glad you’re here! While you may not have a neighbor who hangs his underwear on your mailbox, you can still enjoy a piece of the action. Please check back often for new additions because, as we all know, Ping is Infinite.

The moral of this story is: Just because your friends encourage it, it doesn’t mean it’s a good idea. Nobody wants to buy photos of your neighbor’s underwear. No amount of fantastical thinking will change that.

I have to believe that most prolific people deal with some degree of muck and clutter in their process. They just have the sense not to trot it out for public consumption. Maybe if they did though, it would make the rest of us feel better. I love the idea of a wincing David Sedaris staring at a computer screen and thinking to himself, “I can’t believe I just wrote that.” The void is ultimately about our humanity as artists. I take comfort knowing I’m not the only one with morning breath and the occasional pimple.

There are a variety of ways to navigate around the inspirational void. But the best approach that I’ve found is to have a sense of humor. Nothing turns off the muse as much as someone who takes him/herself too seriously. These types are about as appealing as a long meeting in a stuffy room. Anyway, if I can’t be amazing, I might as well have fun, right? I’m learning to make friends with my bad ideas. They’re like fat dogs lying around on a hot summer afternoon, farting, snoring and stinking up the place. They don’t really contribute anything but they don’t do any harm either.

And so it continues:

You’ve lost your belt
Can’t find your shoes.
You’re shirt’s unbuttoned
And you don’t know what to do.
You’re a little our of sorts,
Stumblin ‘round without a clue.
Trousers to your ankles,
Ya got the pants fallin’ down blues….

“Don’t get a nosebleed. Don’t get upset. We can’t be naked and famous just yet.”

–The Presidents of the United States of America