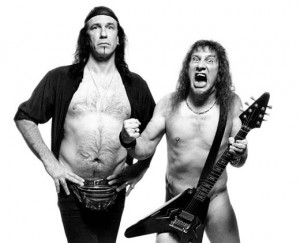 In my last post, I wrote about rejection. Judging from the comments, reposts, likes and emails that I’ve received in response, it’s clear to me that the subject resonates with a lot of people. It seems further examination is warranted. If we’re all feeling like a bunch of rejects, then what does it mean for the big picture of our creative lives?

Rejection is a pragmatic issue as much as an emotional one. Let’s face it–opportunities lead to more opportunities. Recognition increases prospects. Accolades influence market value. The bitch is that outside forces often have more bearing than hard work. When we’re repeatedly passed over, our efforts can feel like rolling a boulder uphill. The frustration is exacerbated if our economic livelihood is at stake. We just want to work, dammit. If we can’t get a break, then what are we left with? It can be heartbreaking. It can also be downright scary.

I recently watched “Anvil: The Story of Anvil,” a documentary about a Canadian metal band that made a brief splash on the world stage in the eighties only to fall into oblivion.  The film follows aging rockers Steve “Lips” Kudlow and Robb Reiner as they slog through day jobs, driving a truck and working construction, while doggedly chasing their decades-old dream of bringing Anvil to superstardom. Broke but determined, they book a European tour– a hopeful resurrection of sorts–only to endure setback after setback. Home again, they continue to search for any glimmer of opportunity, even as family members are reading the band’s last rites. Renewal comes in the form of British producer Chris Tsangarides, who agrees to work with the band on a new CD. Kudlow and Reiner go all in to the tune of £13,000 (borrowed from Kudlow’s sister) but more trouble ensues. “Anvil: The Story of Anvil” is touching, funny and painful.  Some parts are hard to watch. But what struck me about the film was Kudlow. In spite of relentless difficulties, he remains sweetly optimistic and finds goodness in the direst of circumstances. When it comes to upholding his own truth–that music is his mission, his passion and reason for being–he the poster child for tenacity.

In my own work and career, there are some doors that have remained stubbornly shut, despite my sustained efforts. I can’t pry the locks. I can’t coax my way in. I’m not even sure hand grenades could blow them open. This is especially true on the singing front. At points, I’ve grown weary and have seriously considered calling it quits. But every time I’ve come up to that edge, without fail, something happens: I’ll have a killer gig. I’ll experience a night when the synergy between the players is humming and the scat is clicking and the rush of the swing makes me a little high. These moments bring me right back to why I do what I do. They transcend my baser concerns and elevate my sensibilities to something more blissful and alive. It’s about how I want to feel. That is my truth.

Sometimes it’s more than “hard out there.”  It’s straight up brutal. And as I said in the previous post, we have to cultivate the ability to dig deep into our emotional reserves and drill down into that very specific “thing” that makes it all worth it. It’s how we survive the long haul. Beyond opportunities or awards or any other outcomes that we’re fixated on, lies a bigger, more beautiful truth. And all the answers are there.

If we’re brave and tenacious, we can somehow figure shit out.

“Let the beauty we love be what we do. There are a hundred ways to kneel and kiss the ground.”

Postscript: Seattle readers- Anvil will be playing at Studio Seven on April 25th.