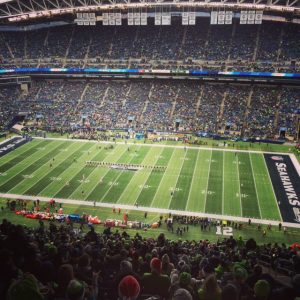 We’re just days away from Seahawks football…mere days. And although it’s only preseason fare, any football is better than no football. Am I excited? Well, as my father used to say, “Is a hog’s hip pork?” I’ve survived the long ordeal of the off-season, enduring week after week of slow dreary Sundays. I’m ready. I’m ready for all of it: first downs, touchdowns, sacks and pick-sixes. Throw in a field goal or two. Dumb happy. Give me the sweet roar of the 12’s.  Bliss baby. I’m even down for a little righteous indignation over a questionable pass interference call. I’m ready for it all. Here are five things that I’m particularly excited about.

Seattle’s run game was less than stellar last year. Between an anemic offensive line, nagging injuries and the post-Marshawn void, the Hawks didn’t get much going on the ground. This created a ripple effect through the rest of the game. A banged-up Russell Wilson, with limited scramble mojo, was forced to pass more frequently, and the offense was unable to consistently sustain drives, leaving the defense on the field for an inordinate amount of time.  But there is reason to be hopeful this year. I’m excited about what I see as a robust backfield. I’m particularly interested in what Thomas Rawls and Eddie Lacy are going to bring.  We know these cats can run. No question there. Rawls, of course, has a punishing running style, and his rookie trajectory was mesmerizing. But back-to-back broken legs disrupted his groove and compromised his productivity. However, he’s had a great training camp so far and looks to be fully healthy and wildly enthusiastic. I have a good feeling about Rawls this season. I’m also optimistic about former Green Back Packer and Pro Bowler Eddie Lacy. During his tenure at Green Bay, he rushed for 3435 yards and 23 touchdowns. But in the past two seasons, he struggled with an ankle injury, ending up on injured reserve early in the 2016 season. Eddie’s also had a well-publicized challenge with his weight. But my gut says that Eddie’s move to the Seahawks is a renaissance of sorts. He’s been working hard, successfully losing weight (earning some shiny coin to do so) and looks to be pretty damn formidable this season. I’m rooting for Eddie. Add C.J. Proise into the mix, and the Seahawk run game looks very promising.

Russell Wilson took a beating last season. He suffered through three injuries–high ankle sprain, MCL sprain on his left knee and a pectoral strain–and an offensive line that offered little protection. His mobility was seriously compromised, but, being Russell Wilson, he powered through. It looks like his off-season was well spent. He seems to be fully recovered and perhaps stronger than he’s ever been. He too has been on a weight-loss regiment, some nutty diet that consists of multiple meals a day and weird food, like almonds. Provided the o-line offers better protection this year and he’s able to escape injury, I expect to see the Russell Wilson magic, complete with Houdini-like escape tactics and mind blowing plays, in full-force his season. It will be a beautiful thing. I can’t wait.

“Excited” might be a misnomer in regards to how I feel about the offensive line. “Cautiously optimistic” might a better choice of words. OK, “anxious” is the most accurate. Unfortunately, the buzz is not good.  In his report on last Sunday’s practice, 710 ESPN’s Danny O’Neil said “I don’t get what the Seahawks are doing with their offensive line.” Derek Lewis of 247Sports described it as a “new mix of youngish and injured players.” And Pro Football Focus predicted the Seattle o-line would be the worst in the NFL this season. Ouch. But maybe there is some reason for hope. According to reports, left tackle George Fant has improved significantly and has a much better understanding of his role. The addition of Luke Joeckel on left guard adds some muscle to the line. Justin Britt is solid at center, and there is every reason to believe he’s just going to get better. Unfortunately, it didn’t help that Germain Ifedi found himself on the wrong side of Frank Clark’s fist.  Ifedi is back in practice, but the extent and impact of his injuries are unknown. This leaves some questions about right tackle. On a positive, there’s no way to go but up, right? Here’s hoping the “oh no” line transforms into the “oh yes” line this year. A girl can hope.

4. BATTLE OF THE CORNERBACKS

DeShawn Shead is still recovering to an ACL injury to his left knee, leaving a gap at right corner opposite Richard Sherman. Top contenders for the spot are veteran Jeremy Lane and rookie Shaquill Griffin. Neiko Thorpe, who is in his second season with the team, is also in the running. By all accounts, all three are doing exceptionally well in training camp. Lane seems to have undergone some kind of significant shift, upping his play considerably. Although he’d recovered from injuries received in Super Bowl XLIX, his performance during the 2016 season was lackluster. But that’s old news. According to Pete Carroll, “Jeremy Lane is one fire right now.”  Griffin, who played for the University of Central Florida, is also making a strong showing and is picking up tips from the best possible mentor– Richard Sherman. Thorpe was impressive on special teams last year and is also working hard at camp. It’s a fierce competition. What makes it particularly intriguing for me is that these guys could be part of next incarnation of the Legion of Boom. I’d say the future looks mighty bright.

Anyone who knows me or reads this blog, knows that Richard Sherman is my guy. As far as players go, he soars the stratospheres. He’s highly athletic, a master of his craft and ferociously competitive. He’s everything you’d want on your defense. Off the field, he’s smart, funny and not afraid to speak his mind. Even though he’s not a president (well, yet anyway), they should probably add his head to Mount Rushmore. He’s that awesome. Last year, though, Richard didn’t seem particularly happy, and all the off-season chatter and speculation was upsetting. It weighed heavily on this humble fan. It’s been good to see him back at training camp and talking with the press again. It’s also a relief. What I hope for Richard this season is that he has an absolute blast. I’m envisioning high flying coverage, show-stopping interceptions, a league record for pick-sixes and razor sharp sound bites that only Richard Sherman can deliver. I want him to be successful. I want him to be happy. I want to be sure of him again.

These are the top five things I’m looking forward to this season, but there so many more– a healthyEarl Thomas zipping around the field, Tyler Lockett post-injury and celebratory pumps from Michael Bennett. It’s all good. So good. And just days away people. GO HAWKS! 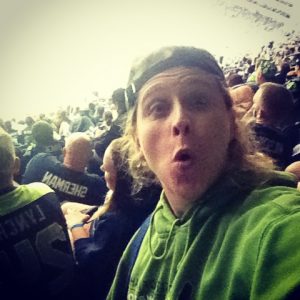