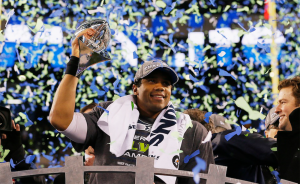 It’s been a week since the Seattle Seahawks roared into MetLife Stadium and beat the Denver Bronocs to become the Super Bowl XLVIII champs. My pulse is finally starting to return to normal. My voice is slowly coming back. I’m hopeful the Skittles hangover will subside sometime in the near future.

The 12th man could not have asked for a more spectacular end to the season or for a more exhilarating ride to get there. Our ferocious and passionate team took us on the adventure of a lifetime. Over the course of five months, we yelled and screamed through grind-it-out drives, pick-sixes so pretty they’d make you cry, frustrating penalties, nail-biting finishes, a few tough losses and handful of come-from-behind victories. We watched in awe as Beast Mode pounded out yard after yard, usually with half a dozen bodies on top of him, sometimes breaking free for the big runs but always moving the ball down the field. Our young quarterback bloomed before our eyes, stepping up with poise, wisdom and a relentless work ethic. We fell in love with him all over again. And the Legion of Boom exploded like a thundercloud, becoming the most ominous force in NFL history. Led by the effervescent Pete Carroll, this mighty team of plucky warriors steadily gained momentum and found an aggregate groove that was formidable and ultimately unstoppable.

Seriously, what more could we have asked for?

Last Wednesday, hundreds of thousands of people filled the streets of downtown Seattle for the Seahawks celebratory parade. The temperatures were frigid and mass transit completely shut down, unable to accommodate the crushing volume of fans. Yet in spite of the discomfort and inconveniences, the day was awash with love and excitement. There were no arrests or altercations, just happy people sharing the crescendo of what has been a collective high. In cheering on this magical team, the people of Seattle have rediscovered each other. We look up from our gadgets. We talk football to strangers. We smile and nod when we pass a fellow fan-perhaps someone in a Russell Wilson jersey or a Seahawks cap-on the street. The Seahawks brought us more than a Super Bowl win.

As the final seconds of the big game ticked down, my tribe and I became unhinged. We were like dervishes spinning off. There is no dope as potent as the pure bliss that we were feeling in that moment. We shrieked. We danced. We jumped around. We cried. We were delirious with joy. And I know that scene was being played out in living rooms, sports bars and public spaces across the city. On a more personal note, I honestly don’t remember the last time I’ve felt that happy. It might have been when my youngest son was born. (He’s 16-years old now.) 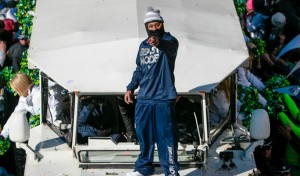 I think the most inspiring thing about the Seahawks is their indefatigable spirit. They didn’t just win the Super Bowl but did so in the most bad ass, in-your-face-way possible. They had something to prove and let the world know it. This robust clan was like the Bad News Bears of the NFL– late round draft picks, undrafted free agents, misfits, rebels and, in some cases, troublemakers. Prior to their magic carpet ride with the Seahawks, many had been passed over, dismissed, marginalize and overlooked. They were gems in the rubble of rejection. But Coach Carroll and General Manager John Schneider saw them and put together a tsunami of talent. Still, the sports writers and football commentators were reluctant to give them their due. They questioned their ability to take it all the way. But doubting this team was like throwing raw meat to hungry animals. And in the end, the Seattle Seahawks had the final word, or as they say, “left no doubt.”  Even when people were stupid enough not to believe in them, the Seahawks never stopped believing in themselves. This is a lesson we can all take to heart.

We’re settling into the off-season now. Soon we’ll be filling our Sunday afternoons with new routines. But the dreamy afterglow of this season will linger on for a very long while, possibly forever. I am just one fan but I feel oddly at peace. My sense of well-being is renewed. My optimism has been significantly bolstered. I’ll bet I’m not alone. Something extraordinary happened here. The earth moved. The stars aligned. And the Seattle Seahawks showed us that anything is possible-for the team, for the city, for ourselves.

One response to “Seahawks: The Afterglow”